Is the universe fine-tuned for life? Read the research research review produced by the Foundational Questions Institute (FQXi) to learn more. 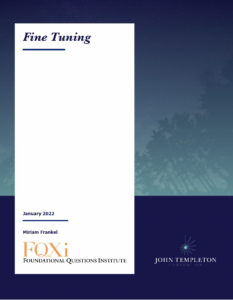 Imagine standing before a firing squad, with 50 trained marksmen aiming rifles at your heart. You’re certain that this is your last moment, but somehow the bullets all miss and you survive. This could simply be a very lucky coincidence; rerun the event enough times and the squad would be statistically likely to miss a few times. But chances are you would feel perplexed about your survival and want to seek answers about how this happened. This metaphor was put forward by John Leslie to demonstrate Fine-Tuning, and how the existence of life in the universe similarly relies on improbable cosmic conditions, with physical variables seemingly aligning perfectly to enable the evolution of intelligent beings (Leslie, 1989).

While our hospitable universe could just be a fluke, it is only natural for us to try to dig deeper. Over the last few decades, the subject of fine tuning has attracted some of the sharpest minds in physics. By probing the universe’s physical laws and precisely pinning down the values of physical constants, such as the masses of elementary particles, physicists have discovered that surprisingly small variations in these values could have prevented the formation of the components necessary for life in the cosmos — including planets, stars, and galaxies.

The scientific study of the fine-tuning problem has a long history, stretching back a century. In a new research review produced by the Foundational Questions Institute, science writer Miriam Frankel explores the complex history of research on fine-tuning, including potential explanations — such as the anthropic principle, string theory, and the multiverse — the key ingredients for life, and testing explanations for fine-tuning.

The Ingredients for Life

Research on fine tuning involves investigating what ingredients are actually necessary for life to evolve. For example, one claim is that the masses of subatomic particles are precisely tuned to allow atoms to remain stable — an essential condition for the chemistry of life. Physicists have also discovered evidence of fine tuning to some extent in all the four fundamental forces of nature—the electromagnetic force, gravity, and the strong and weak nuclear forces that affect subatomic particles. If these had slightly different strengths, they have argued, stars could not have formed. Stars are the factories that produced heavy elements in the universe, including carbon. And since life — at least as we know it — is based on carbon, without stars, any universe would be bereft of organic life.

Chapter three of the review outlines the multiverse framework and the development of string theory— our best current candidate model for unifying physics, which posits that elementary particles are composed of tiny vibrating energetic strings. Taken together, these provide a physical explanation for why our cosmos should be so hospitable; in an infinite multiverse, cosmoses conducive to life will pop up every so often. Both the multiverse and string theory are speculative, though well-respected, models. However, their physical predictions have proven difficult to test and may (or may not) forever lie beyond the bounds of empirical verification.

It is natural to question whether there are experiments, observations, or measurements that could help us to establish whether the universe is actually fine tuned for life. What tests are currently underway, or proposed for the near future, that could confirm, or at least support, string theory or the multiverse view? Frankel focuses on such experiments in chapter four of the research review.

Is Fine-Tuning an Illusion?

Many physicists are skeptical that our universe is fine tuned for life, with some arguing that any apparent fine tuning is an illusion. Some scientists have argued that in the absence of a probability distribution for the possible values of parameters that could occur, it’s impossible to argue with conviction that our measured values are actually odd or “lucky.” Another major issue is that a lot of the evidence supporting the idea that our universe is fine tuned for life is largely based on investigating how changes to the parameters of the universe would, in theory, affect the evolution of a bio-friendly cosmos like ours. But we cannot rule out the possibility that some kind of life could arise even in a universe with completely different properties. In chapter five, Frankel explains that in some cases, if one allows many parameters to vary simultaneously, it could alleviate the apparent fine-tuning problems. This suggests that the universe may not be so finely tuned after all — it may be able to produce life under a wider range of circumstances than first thought.

Frankel concludes the review by returning to the overarching question — is the universe ultimately fine-tuned for life? To learn more about her conclusion, read the full review.

Read the full research review on Fine-Tuning by Miriam Frankel.

Read more about our collection of research reviews from the Foundational Questions Institute (FQXi).

Explore our other research reviews on topics such as:

Four new scientific reviews tackle the origins of space, time, and the universe—and the mystery of why the cosmos seems ideally suited for human life.   What happened before the Big […]