Choice matters: New insights into the philosophy, psychology, theology, and neuroscience of free will

Our lives might be well-described as a rich and endless chain of decisions and consequences: just about everything we do, say, or even think can be described as some form of selection between options (say this or that, stand or don’t stand, pick out this item at the market). But are all those choices really ours — given the exact starting conditions, was everything that happens simply bound to happen? And if so, is choice (and the responsibility for our choices) simply an illusion? Matters of choice, responsibility, and free will have entranced and entangled philosophers, theologians, and scientists for millennia. Questions of free will cut to the heart of what it means to be human, and at times to the very nature of reality itself.

Recent work across many disciplines outlined in this 67-page white paper commissioned by the John Templeton Foundation is offering a few answers — and teasing out new questions as to what free will looks like, both in theory and in practice.

THE METAPHYSICS AND PHILOSOPHY OF FREE WILL 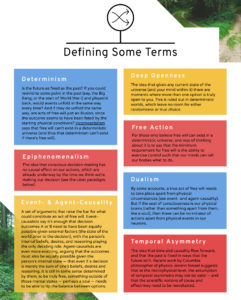 To understand the debates about free will you need to start by defining some key terms.

From a metaphysical perspective, free will is a logic puzzle that hinges on precisely defined terms and well-explored counterfactuals. Philosophers of various bents have explored which understandings of free will are compatible with which understandings of the universe. For some, free will remains a logical impossibility; for others, such freedom exists in forms more rare or attenuated than, say, a libertarian economist or a hard-charging district attorney might want to believe. How much conscious control does someone need to have exercised free will? Is our ability to behave as free agents best thought of not as an on-off switch but as a continuum, where circumstances and other “nudges” may push us towards actions without fully dictating our choices? For free will to be free does it have to appear random from the outside? From a free will perspective, is declining to act another form of action?

THE NEUROSCIENCE OF FREE WILL (AND FREE WON’T)

In 1983 Benjamin Libet, a professor at the University of California, San Francisco, began publishing a series of pioneering neuroscientific studies testing the claim that conscious internal decisions are the true causes of actions. Using EEGs, Libet’s team watched participants’ brains as they made and acted on simple decisions about when to flex their wrists. Intriguingly, Libet’s tests showed that the participants initiated the process of action about a third of a second before they said that they were  consciously aware of having made the decision to move. This posed a problem for free will: if we start to act before we have decided to do so, how can we say that our actions are the result of our decisions? Libet himself suggested that they weren’t — but that people might still exert a form of control he termed “free won’t” — the ability to consciously override actions that had already been initiated. For decades, Libet’s paradigm has informed other tests of the decision-making process as neuroscientists work to tease out reliable biomarkers for what happens when we make decisions and act on them. Although such results have provided fodder for determinist criticisms of the idea of free will, some critics respond that the Libet paradigm extrapolates too much (“Humans don’t have free will”) from too little (the decision to move one’s wrist), while promoting exacting requirements of free will that have little to do with the ways that everyday people conceive of it. (For instance, the paradigm assumes that conscious awareness of a decision needs to be the first event in the chain of neurological actions in the decision-action process to be relevant.)

THE PSYCHOLOGY OF FREE WILL 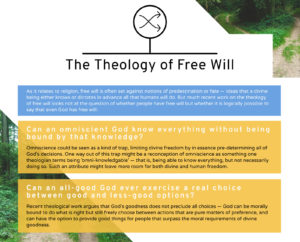 How is free will compatible with various concepts of God?

Both the neuroscientific and the philosophical approaches to evaluating free will operate according to exacting terms that would seem to exclude most if not all decisions that a person might make during the course of his life. (How many choices have we made that were unaffected by outside circumstance and influence, or by how we were feeling at the time?). Psychology, for its part, has tended to examine free will at the street level, exploring how we make our choices in the course of life and what circumstances might make them more or less free.

A large body of psychological studies has examined whether the character trait of self-control might be a proxy for free will. Research shows that our capacity for self-control is not unlimited — if we exercise a lot of self-control completing one task, we will have a harder time immediately tackling another one that also requires self-control. Studies have shown intriguing links between self-control levels and physiological markers including resting heart rate and blood glucose and cortisol levels. Developmental psychology suggests that self-control and responsibility for our actions mature as we develop (which is why we generally assume young children aren’t fully in control of their behavior). All of this raises questions about whether free will — regarded in this context as a spectrum of levels of freedom for conscious deliberation over our choices —  can be strengthened as well as weakened. University of Calgary neuroethicist Walter Glannon has done interesting work on how advances in neuroscience ranging from psychopharmacology to brain-computer interfaces might make individual acts of free will (and corresponding responsibility for those actions) more or less possible.

One of the most significant drivers of free will may be whether a person thinks free will really exists. Research shows that people’s beliefs about free will have been shown to significantly affect their behavior. In one study, participants induced to disbelieve in free will tended to be more likely to conform with others’ actions and judgments. A strong belief in free will has been associated with positive outcomes including life satisfaction, tendencies towards gratitude and forgiveness, and higher reported commitment to relationships. Interestingly, one way to increase people’s belief in free will is to expose them to immoral behavior — this result bears out both in carefully controlled lab settings and in country-level data that shows that countries with higher crime rates report stronger general belief in free will.

Some psychologists have argued that, despite the exacting work of philosophers and neuroscientists, free will represents a genuine psychological reality, not mere window-dressing for the inevitable actions of physical systems and neurons. Our everyday conscious processes are the result of high levels of integrated self-organization that can be seen as constituting a system of free will atop deterministic elements. Even the challenge of the Libet paradigm, suggesting that conscious intentions don’t initiate our actions, need not cancel the notion of free will. According to that view, the conscious mind isn’t so much competing with unconscious processes as complementing them, in the way that a skilled jazz improviser mixes instinct and honed conscious practice when playing a solo.

Watch our latest video, which features Chapman University computational neuroscientist Uri Maoz discussing the latest research into the enduring mysteries of free will. What does the neuroscience of free will […]

New $5.34 Million Grant to Examine the Neuroscience of Free Will

Think about a decision you’ve made — a big one like where to go to college, or a tiny one like whether to pick up your phone. People take for […]