Psychologists and philosophers are working to tease apart the ways we respond to new ideas and information — and the possible benefits of intellectual humility.

Saint Augustine famously called humility the foundation of all other virtues. One variety of humility, intellectual humility, is perhaps the most foundational when it comes to the interests of the John Templeton Foundation.

Intellectual humility is a mindset that guides our intellectual conduct. In particular, it involves recognizing and owning our intellectual limitations in the service of pursuing deeper knowledge, truth, and understanding. Such a mindset appears to be valuable in many domains of life — from education to interreligious dialogue to public discourse. It promises to help us avoid headstrong decisions and erroneous opinions, and allows us to engage more constructively with our fellow citizens.

Over the last decade, psychologists, philosophers, and other researchers have begun to explore intellectual humility, using analytical and empirical tools aimed at understanding its nature and implications. At once theoretically fascinating and practically weighty, the study of intellectual humility calls for collaboration among researchers from fields of inquiry including psychology, epistemology, neuroscience, and educational research. In recent reviews of research commissioned by the John Templeton Foundation, Fordham University philosopher Nathan Ballantyne and Duke University psychologist Mark Leary synthesized findings from dozens of recently published articles on the topic, highlighting both the answers, and the questions, they raise.

Surveying the definitions offered in the literature, certain common features emerge. Intellectual humility speaks to people’s willingness to reconsider their views, to avoid defensiveness when challenged, and to moderate their own need to appear “right.” It is sensitive to counter-evidence, realistic in outlook, strives for accuracy, shows little concern for self-importance, and is corrective of the natural tendency to strongly prioritize one’s own needs.

In a nutshell, intellectual humility helps us overcome responses to evidence that are self-centered or that outstrip the strength of that evidence. This mindset encourages us to seek out and evaluate ideas and information in such a way that we are less influenced by our own motives and more oriented toward discovery of the truth. When we discuss important, controversial issues with others, our initial responses to their arguments tend to be shaped by our preferences, identities, and prior opinions. It buffers against those responses so that we can become more “truth-oriented.” It helps us overcome our self-centered inclinations in discussion and learning, making us more likely to follow the evidence where it leads and positioning us to better understand the truth.

Researchers have presented a number of models for how this virtue functions. Some suggest that it moderates particular attitude-forming tendencies, making intellectually humble people more likely to reconsider their views and less defensive when their beliefs are challenged. Others say that it helps us accurately evaluate our beliefs and intellectual weaknesses. Still others posit that intellectual humility reduces our concern for our own intellectual self-importance. Finally, mixed accounts combine these features in various ways. All of these models of intellectual humility assume that different types of mechanisms regulate self-centered responses to evidence, but each one suggests that intellectual humility helps people become better attuned to evidence and less beholden to self-oriented motives.

Attempting to measure this trait can be, for the researcher, a humbling experience. As with many personality trait measures, gathering self-reports is an obvious place to start. But since intellectual humility is often seen as a valuable or desirable trait, people may be motivated to claim to be more intellectually humble than they really are. This may be amplified by a so-called “modesty effect,” which suggests that truly intellectually humble people will be modest in their reports, leading to lower self-ratings, whereas people who lack it will exaggerate, inflating their self-ratings. 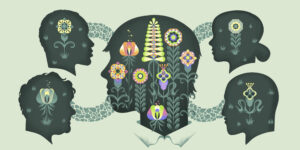 Artist Marina Muun depicts a garden in the shape of a person’s profile. It has paths to all other gardens and contains a multitude of flowers from the surrounding ones. This illustrates the impact of considering other people’s ideas and holding them in a way that lets them flourish.

Although researchers do not agree whether there is a modesty effect, some have worked to bypass its potential influence by creating non-first-person measures. In essence, if we want to know whether certain people are intellectually humble, don’t ask them — ask the people who know them. But even these other-reporting measures have limitations since observers’ perceptions may themselves be biased. They may, for instance, attribute higher levels to people who agree with their beliefs and values than to those who do not. Following insights from research on general humility, intellectual humility might best be observed by others in certain kinds of situations: during interpersonal conflict, while receiving praise, in hierarchical relationships, or in interactions across different cultures or among those who embrace different norms.

Consider, for example, the claim that intellectual humility increases well-being. A contrary suggestion is found in work on how we relate to our beliefs when defending ourselves against challenges to our worldview. On the one hand, some people treat their beliefs as a source of comfort and self-confidence in the face of challenges; they tend to display high levels “existential security,” having come to terms with weighty questions about meaning and mortality. On the other hand, intellectually humble people are more tentative about their challenged beliefs and display lower levels of existential security. It’s currently unclear, however, what such findings tell us about the relationship between intellectual humility and well-being. Existential security is typically measured using self-reports, and so one possibility is that when people hold “defensive” beliefs, they tend to self-enhance and report more security than they in fact experience. People who use their beliefs to resist worldview challenges may exaggerate their security because their beliefs suggest they ought to feel secure.

Another proposed benefit of intellectual humility is that it enhances tolerance or respect for the beliefs or ideas of others. Ego-defensive reactions can lead people to discount, disparage, and even shun out-group members. In the interplay of intellectual humility and religious belief, some studies have suggested that among monotheists, those who are intellectually humble are more tolerant than those who aren’t when it comes to interacting with those from different traditions. But the limits of tolerance based on intellectual humility are not yet well-understood — it is possible that an intellectually humble Christian would be more tolerant of Jewish or Muslim viewpoints than they would be of those of a Hindu polytheist. Or perhaps there are no correlations among these variables at all.

If intellectual humility does not lead to boundless tolerance, it may at least help people overcome what Freud called the “narcissism of small differences.” This is a central topic for future research given that political and religious debates can spiral into ever-increasing fractiousness and polarization. If intellectual humility does in fact make people more tolerant, the value of that outcome may depend upon the range of differences they can tolerate.

A TOOL FOR LEARNING

Most people who carry out research on intellectual humility assume that it is something we should try to foster. Depending on one’s views of the sources of intellectual humility, different potential interventions may seem promising. If metacognitive ability (thinking about thinking) is a key driver, then interventions could focus on developing metacognitive skills that enhance it.

If intellectual humility is primarily enhanced or hindered by our degree of personal security, a particularly cautious course may be necessary for interventions, as emphasizing novel ideas about intellectual humility could be perceived as a threat to deeply held values. Still, some research with an exemplar-based intervention (teaching students to write and think in ways that align with how humble people write and think) found that although the participants may have felt challenged by the exercises, the result was that they felt humbled, increasing their levels of lasting humility in the process.

Finally, work on situational primes and so-called nudging strategies suggests there may be ways for subtle cues and positive reinforcements to increase intellectual humility. Researchers have have found that subjects who make judgments inside school buildings are more likely to endorse greater spending on education. In the same way, there may be environments or sets of cues that can increase or diminish our levels of intellectual humility in certain settings.

Our understanding of the subject has expanded considerably over the last decade, but much more remains to be explored and clarified. Reviewing the literature, it becomes clear that the field is ripe with potential for greater collaborations, ranging from workshops and seminars to the creation of permanent university-hosted interdisciplinary centers that could serve as hubs for research and publishing on intellectual humility and related concepts. One of the benefits of interdisciplinary partnerships is that it forces researchers to recognize the limits of their individual academic domains. As Sir John Templeton himself once noted, in thinking about humility we can foster humility within ourselves.

The Transformative Power of Humility

‘Together in Our Differences’

What inspired one of the world’s great pioneering global investors to devote his wealth to unlocking the mysteries of the universe and human nature? Heather Templeton Dill, president of the […]

A new $2.6M grant to help communities cultivate intellectual humility through online learning Admitting mistakes can be difficult — especially in a polarized society where certainty is prized — but […]

In this conversation with grantee Rabbi Geoffrey Mitelman, founding director of Sinai and Synapses, he speaks about the importance of intellectual humility, the Scientists in Synagogues program, bringing together science […]

In this conversation with grantee Angela Duckworth, founder and CEO of Character Lab and professor of psychology at the University of Pennsylvania, she speaks about being a good person, advancing […]

In this conversation with grantee Jeffrey Rosen, the President and CEO of the National Constitution Center, he speaks about the importance of intellectual humility, spreading “constitutional light,” and preserving civil […]