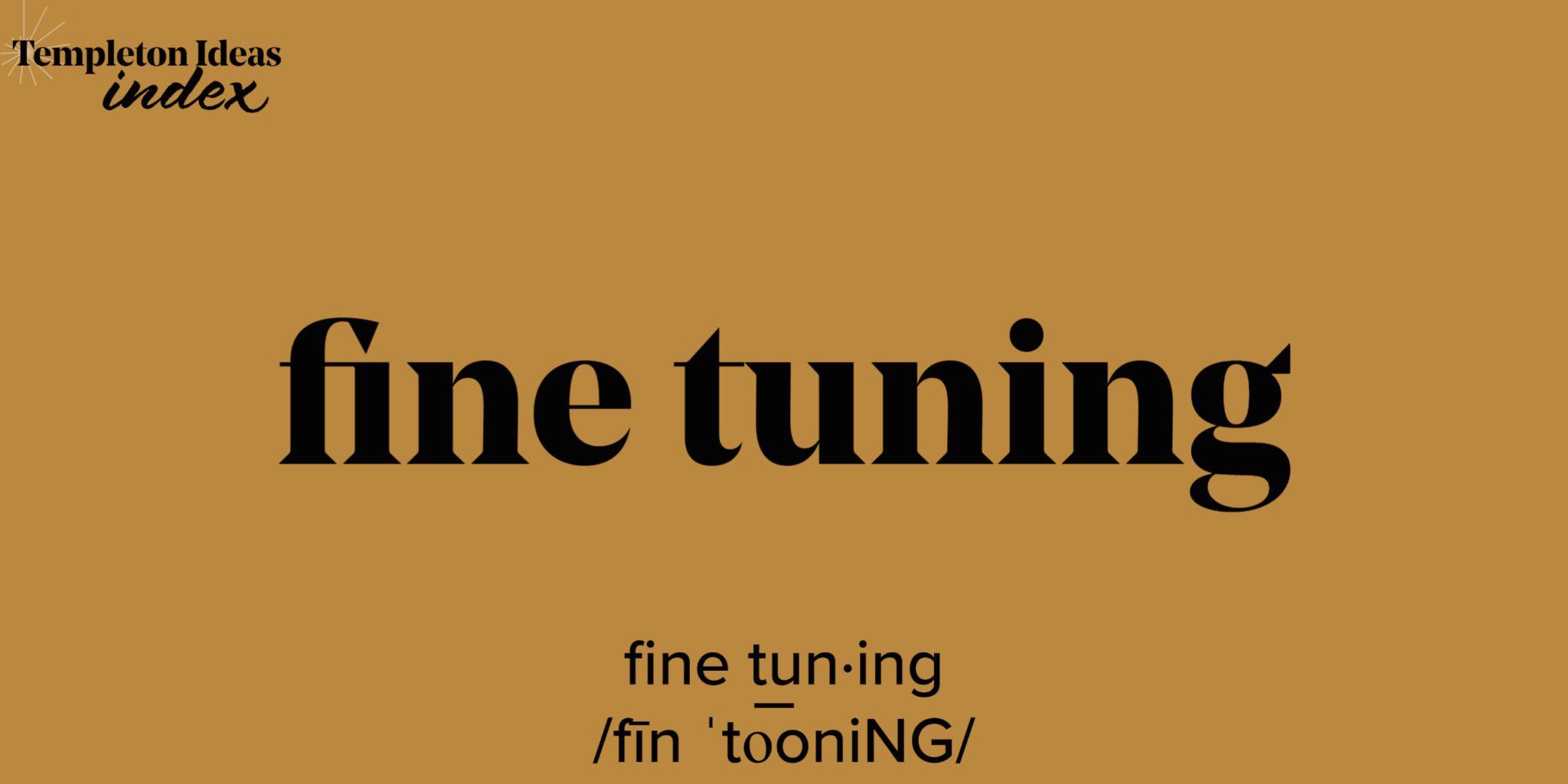 Fine tuning is a metaphor derived from music and mechanics that is used to describe apparently improbable combinations of attributes governing physical systems.

The term is commonly applied to the idea that our universe’s fundamental physical constants are uniquely and inexplicably suited to the evolution of intelligent life. Scientists, philosophers and religious thinkers have used the concept of “fine tuning” to describe a variety of physical or biological systems ranging from bacterial anatomy to the Big Bang, often as a launching point for broader scientific, philosophical or theological questions.

How Fine Tuning Challenges Our Understanding of the Universe

Just as a piano or an airplane engine is considered finely tuned when its parts are  precisely aligned to allow it to function, our universe has attributes that some regard as precisely balanced. The masses of subatomic particles, the strengths of atomic forces, and the nature of space and time have values that allow for the existence of matter, stars, galaxies and planets hospitable to the formation of life. Many scientists have noted that the values of these key constants appear to be arbitrary and possibly random, making the probability of a universe like ours vanishingly small.  Some have compared it to being shot at by 50 members of a well-trained firing squad and emerging unscathed.

Scientists have been debating whether the apparent fine tuning of the universe is significant for more than a century, and several groups of possible explanations have been offered. Philosophers and theologians such as Richard Swinburne and Robin Collins have argued that fine tuning must imply that there was a fine-tuner: that the universe could have only occurred with the intervention of an intelligence, whether a deity, alien life form running the universe as a simulation, or simply an unknown presence in the universe itself. Others, like cosmologist Luke Barnes, view some sort of theism as the most promising — but not the only — explanation for the questions raised by fine tuning.

The Anthropic Principle and the Multiverse

One of the earliest attempts to come up with a scientific explanation for fine tuning was framed as the anthropic principle. It states that humans should not be surprised to discover themselves in a universe that has the exact conditions to support intelligent life, since we could not observe it otherwise. In the past 20 years, versions of the anthropic principle have found new currency with theories of a multiverse. This theory suggests that our cosmos is one of a near-infinite number of universes, some of which by chance have the right physical features to support life. Multiverse theory (as explained either through post-big-bang inflation, or as part of String Theory) is not without its critics, many of whom view it as fundamentally untestable and thus not a legitimate scientific explanation.

One answer to the problem of fine tuning is to argue that it is not a problem at all. The existence of a life-sustaining set of arbitrary physical laws may be less improbable than many physicists think.

Additional theories to explain fine tuning include the idea that the universe might have undergone cyclic expansions and contractions, which could account for some of the apparent improbability of its current observed attributes. Another, posited in 2006 by Stephen Hawking and Thomas Hertzog, uses the idea of superposition — that quantum objects exist in multiple states until they are measured — and applies it on the level of the universe. When we make observations of the past, they argue, we select out the possible history that would lead to our existence.

What’s Next for the Science and Philosophy of Fine Tuning?

A number of scientific experiments have been proposed or are underway. These efforts might be able to detect evidence of the existence of a multiverse, or lead us towards a new fundamental theory of nature in which the values of physical constants are explained more deeply.

One key area for the refining of discussion about fine tuning is a growing documentation of the different ways that fine tuning arguments have been made. Within the sciences, it often requires specialized knowledge to assess whether a system is fine-tuned: cosmologists focus on things like the densities of various kinds of energy and matter (both directly observable and “dark”), as well as the cosmological constant, which is the energy density of space. Philosophers and theologians have used scientific findings of fine-tuned physical symptoms to reach metaphysical conclusions, sometimes without a detailed understanding of the science involved. Because of that, much of the work to be done around fine tuning is less about finding new fundamental scientific discoveries than about helping physicists to become better philosophers, and vice versa.

The John Templeton Foundation has supported numerous projects related to fine tuning, including funding a field guide to fine tuning as it is used across disciplines. Learn more on fine tuning’s philosophical implications, and read the full research review on fine tuning.

Luke Barnes’ book A Fortunate Universe offers a good overview of the topic. Barnes also debated fine tuning and its implications with Sean Carroll on the Unbelievable podcast.