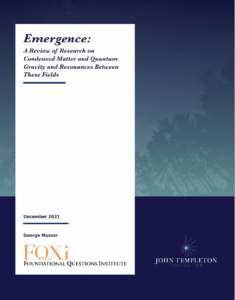 Take a look at the natural world around you. What do you see? In living organisms, complexity is immediately evident. But in simple objects, such as a balloon filled with air, the appearance is deceptive and masks complex inner workings. Even the most imaginative person can scarcely envision the countless little dramas playing out as air molecules bounce and ram and swirl. There are more interactions in a thimbleful of air than across the entire Internet, and more in one second than in all of human history. This is where Research on Emergence comes into play.

Outward simplicity is not in contradiction with inner complexity; in fact, one emerges from the other. Pressure, density, and temperature are relatively easy to measure, yet they derive from the motion of trillions of atoms. Even if you could track each particle independently, it makes no sense to speak of the temperature of an individual molecule. It is only the overall distribution of speeds — a collective property — that determines essential qualities like temperature, pressure and density.

How complexity begets simplicity is one of the great questions of modern science. In a new research review produced by the Foundational Questions Institute, science writer George Musser explores this question and the related concept of emergence, or how a group of things can display features that are not found in any of their components. Musser considers how in many exotic materials, such as the wonder-material graphene, the properties of the whole are greater than the sum of the parts, potentially yielding tremendous practical applications.

The Concept of Emergence in Condensed Matter Physics 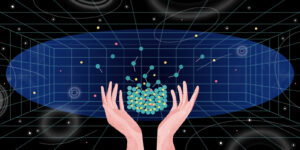 The bulk of life on Earth is made from six chemical elements. They do not merely combine into multitudinous chemical compounds, but assemble into many different states of matter. As physicists venture to realms of extreme cold or pressure, they find more and more states of matter that are alien to human experience. Solid, liquid, gas: that’s just the start. To a physicist, there are many more exotic phases. Understanding how matter is organized is an essential step in developing revolutionary new medical treatments, electronics, and even quantum computers.

When materials freeze or boil, they are said to undergo a phase transition. In most of the transitions we are familiar with, as the density changes, there is a period when both phases coexist — water sits in the tray with the ice; steam swirls above the roiling liquid. In the early 1800s, in the first indication of the diversity of phase transitions, physicists found they could compress a gas into liquid without any abrupt change or transient co-existence. Later that century, physicists discovered that a bar of iron could undergo an analogous transformation from magnet to non-magnet. In the 20th century, they noticed phases within phases: ice can switch from one crystal structure to perhaps two dozen others. And they discovered superconductivity, later recognized to be a phase not of the atoms but of the electrons within a material.

Today, there is an ever-growing set of candidate phases of matter. They fall into multiple broad categories, within each there are hundreds of variations. This review does not attempt to cover all those phases, but rather describe physicists’ best understanding of phase transitions.

The Emergence of Spacetime

In the third chapter of the review, Musser discusses the search for a theory of everything—specifically, a framework that combines quantum theory, originally developed to describe atoms and subatomic particles, with gravity. Emergence has become a central theme in this endeavor. At first, it seemed like nothing could be much simpler than space. By default, it is sheer emptiness, merely a container for matter and energy. But then, Musser explains, Albert Einstein realized that space is woven together with time to create a spacetime fabric, a dynamic entity that pervades the universe. Since then, physicists have calculated that space has an enormous latent complexity, more than anything else known to science. It even makes air, with its trillions upon trillion of molecules, seem pitifully austere.

Musser concludes the review by synthesizing findings from the study of condensed matter physics and spacetime. He identifies how theoretical developments in understanding the emergence of space have fed back into condensed matter, enriching both research areas and enabling scientists to solve the problems of one area by importing ideas from the other.

Read the full research review on Emergence by George Musser.

Read more about the upcoming research reviews from the Foundational Questions Institute (FQXi).

Four new scientific reviews tackle the origins of space, time, and the universe—and the mystery of why the cosmos seems ideally suited for human life.   What happened before the Big […]

The Leap to Life: $2.9M Grant to Explore Life’s Emergence

Robotic chemical reactors, synthetic organisms, and artificial intelligence are poised to shed new light on one of science’s most engaging and vexingly murky questions — the origin of life — […]