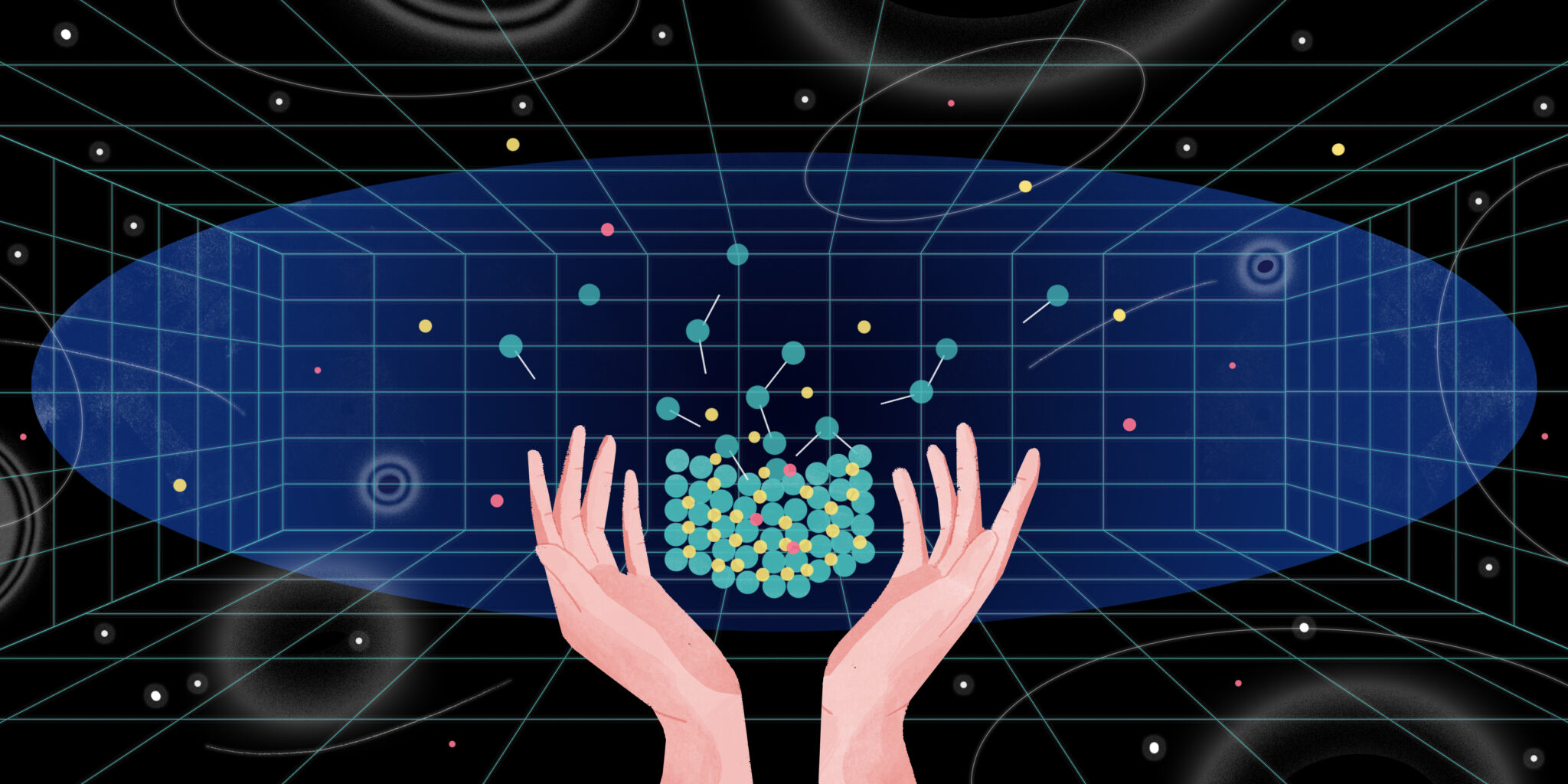 This story is Part I of a two-part series drawing from our recent research review on emergence. Stay tuned for the release of Part II next week.

When Subir Sachdev was a physics student in the 1980s, he had little more than a passing interest in black holes, the cosmic behemoths that swallow everything unlucky enough to cross their surface, or ‘event horizon.’ His interests were far more down-to-earth; Sachdev wanted to investigate exotic materials that can be tested in a typical lab, in the basement of a physics department, and whose weird properties might one day be harnessed for improving electronics.

And you can hardly test a black hole in the lab. Or can you?

Sachdev, now at Harvard University in Cambridge, Massachusetts, specializes in the physics of condensed-matter systems, studying how the collective behavior of atoms at the microscopic level leads to the sometimes bizarre properties of materials seen in experiments. His work has helped illuminate some of the strange behavior of metals that can become superconductors — conducting electricity without resistance — at unusually high temperatures. But when modeling these strange metals, Sachdev was surprised to find that he and his then student Jinwu Ye had accidentally developed a model that could also be turned towards solving some of the biggest paradoxes about black holes. They had stumbled on a special case of a much broader link that others were finding between the gravity of these cosmic crunchers and the quantum quirkiness describing exotic lab materials. That connection may open the door to testing predictions about black holes, in the basement.

The big physics mystery that captivated Sachdev, when he was a post-doctoral researcher at Bell Labs, in Murray Hill, New Jersey, had nothing to do with black holes, but with superconductors. First discovered in 1911, these materials can conduct electricity without resistance when chilled down close to 0 Kelvin, or absolute zero (-273.15º Celsius). Condensed-matter physicists thought they had a good handle on how they worked. They understood the laws of quantum physics that governed the behavior of electrons and could extrapolate from those how various materials would act. “There was a general feeling that condensed matter was well understood,” says Sachdev. “If you understand the quantum mechanics of one electron, you could understand the whole material.” But that was about to change.

In 1986, IBM researchers in Zurich, Switzerland, Johannes Georg Bednorz and Karl Alexander Muller induced superconductivity in a ceramic material at a temperature of 35 Kelvin (or 35 Celsius above absolute zero) — a feat that won them a Nobel Prize in Physics. That may sound cold, but it was a whopping 12 degrees higher than the previous highest temperature, and for a superconductor it was positively balmy. “It was an incredible discovery,” says Sachdev. “The $64-million question was why is the temperature so high? And can you make it higher?”

The race was on to raise the working temperature of superconductors further, with the hope that they could one day be used at room temperature, revolutionizing everyday electronics. “I thought that this would be solved in a couple of years,” Sachdev says ruefully. But as more detailed measurements of high temperature superconductivity were made, “it became clear we needed a whole new paradigm,” he says.

Sachdev and others realized that some of the materials that exhibit superconducting behavior at unusually high temperatures were weird even when they were not superconducting. Take yttrium barium copper oxide, which is now dubbed a “strange metal” because its resistance doesn’t vary with changes in temperature in the familiar way seen with normal metals. (Specifically, when normal metals are examined at extremely low temperatures, their electrical resistance increases with the value of their temperature squared and eventually plateaus. By contrast, the resistance of strange metals is directly proportional to temperature under these conditions and also depends on the external magnetic field.)

The problem, physicists realized, was that they had been thinking about the behavior of electrons in the metal too simplistically. In a normal metal, electricity flows when electrons whizz around, and the electrons can be imagined to move more or less independently. In strange metals, however, the electrons are somehow linked together over a long range within the material, allowing new and unpredictable properties to appear.

This odd linkage between the electrons is called “entanglement” and it is a peculiarly quantum phenomenon that physicists have demonstrated in the lab. You can imagine two entangled particles like two coins. When you flip any one of the pair, it will have a 50/50 chance of landing heads-up, as expected. But what’s bizarre is that the moment it has landed you know that if you flip its entangled partner, it will definitely land heads-up too. This spooky connection holds even if the second coin is located in another room, or even across the universe; their fates remain intertwined. “We needed to understand quantum entanglement to understand the emergent properties of strange metals,” says Sachdev. “Perhaps I am an arrogant type,” he jokes, “but I thought, well let’s give it a try.”

In the early 1990s, with Ye, who is now at Mississippi State University, and Antoine Georges at Collège de France, in Paris, Sachdev worked on a simple one-dimensional theoretical model — then dubbed the ‘SY model’ after Sachdev and Ye — in which they could study entangled particles that don’t move around. They were immediately encouraged to find that the SY model could predict the bizarre relationship between resistance and temperature seen in strange metals, if not all the exact details. It also reproduced another weird property of strange metals: When you disturb a metal, say by applying an electric field, it disrupts the electrons. The metal takes a certain amount of time — known as the relaxation time — to settle back down to its original, undisrupted state. For a normal metal, this relaxation time is a few fractions of a second, or femtoseconds, and depends on numerous factors, like its charge and mass. For a strange metal, the relaxation time is significantly faster, depending only on the strange metal’s temperature. “Strange metals quickly forget they have been disturbed,” says Sachdev.

What’s more, the SY model showed that the relaxation time of strange metals was the fastest time possible, in theory. Here came a major surprise and the first inklings that the SY model had cosmic reach. This speedy amnesia chimed with the relaxation time of a very different object: a black hole. These cosmic entities are created when some stars die and collapse inwards, squeezing huge amounts of matter into an infinitely dense point, or ‘singularity,’ which is shrouded by an event horizon. In the standard picture, any matter, or even light, that crosses the horizon will be trapped, drawn inextricably inwards until it is crushed at the singularity.

In the 1970s, Stephen Hawking had calculated out that these holes have a temperature and emit radiation from their event horizon, gradually shrinking. Physicists had calculated the theoretical relaxation time of a black hole, the time it would take a black hole to settle back down after it’s disturbed, and — just as with strange metals — it also depends only on the hole’s temperature, and it is the fastest time possible. This theoretical prediction has since been confirmed by measurements of gravitational waves emanating from the merger of black holes. “Black holes and strange metals are the champions of forgetting things,” says Sachdev.

Suddenly — and totally accidentally — the SY model seemed to describe black holes, just as well as strange metals. Alone, the relationship might have been passed over as a quirky coincidence. But unbeknownst to them, another physicist studying how black holes are described by string theory — a hypothetical framework in which elementary particles are made from tiny threads of energy — was about to firmly cement the connection.

In 1998, string theorist Juan Maldecena at the Institute of Advanced Studies in Princeton, New Jersey, asked people to imagine a theoretical universe that looks something like a soup can (see diagram). Inside, the can was filled with space containing strings and black holes, which move around governed by gravity. More familiar kinds of particles live on the can’s surface and obey quantum laws. Maldecena conjectured that the quantum physics on the boundary was equivalent to the gravitational physics inside the universe. And every black hole, say, inside the can, was twinned with a quantum system on the can’s surface. This is referred to as spacetime holography, by analogy with 2-D holograms that can encode information about a 3-D object.

This dual holographic description was handy because it meant that if you wanted to understand the behavior of black holes inside the universe, but found the gravitational equations too sticky to solve, you could switch to the simple quantum equations that described its twinned system of particles on the boundary and solve those instead. The answers were valid for both. The SY model’s joint description of strange metals and black holes was a simple example of this duality: you could think of the strange metals following quantum rules on the one-dimensional boundary of a imaginary two-dimensional universe containing black holes. “It is much easier to do calculations using the SY model because it has only one dimension,” explains Ye.

Maldecena’s work triggered a flurry of activity amongst string theorists who were excited about this new mathematical tool for easing black-hole equations. But it made only a little dent in the condensed-matter world, and few expected for it to have relevance in the lab. Still, Sachdev was energized and he used Maldecena’s conjecture to predict certain features of the wonder-material graphene, which guided later experiments and were eventually confirmed. “I was delighted my hunches were correct,” says Sachdev. “Usually you just find out you are wrong!”

In 2010, Sachdev used the SY model and Maldecena’s holographic duality to set out more connections between black holes and condensed matter systems, but admits his work was met with a thundering silence. “The community didn’t believe me,” he laughs. “It was too radical!” The skepticism was justified, he adds, because Maldecena’s soup-can universe seemed about as distant as you can get from the lab bench. And, Ye adds, other condensed-matter physicists were also building successful models of strange metals, without using the SY model, or making connections to black holes. “Ours is one possibility, but there are many others,” he says.

String theorists also paid little attention to Sachdev’s successes. “Maybe I had been too cautious, only saying that the SY model was superficially related to black holes,” says Sachdev. But, in 2015, string theorists sat up and took notice, when quantum physicist Alexei Kitaev, at Caltech in Pasadena, gave a talk in which he independently showed that the connections run far deeper. The model was rechristened the “SYK model” to acknowledge Kitaev’s advances.

Suddenly, string theorists were curious to see if the SYK model could be turned towards solving one of the biggest physics questions of the past half century: what is the fate of information about objects eaten by a black hole? “Kitaev came on the scene and opened the floodgates,” says Sachdev. “That was the game-changer.”

This story will be continued continued in part 2.