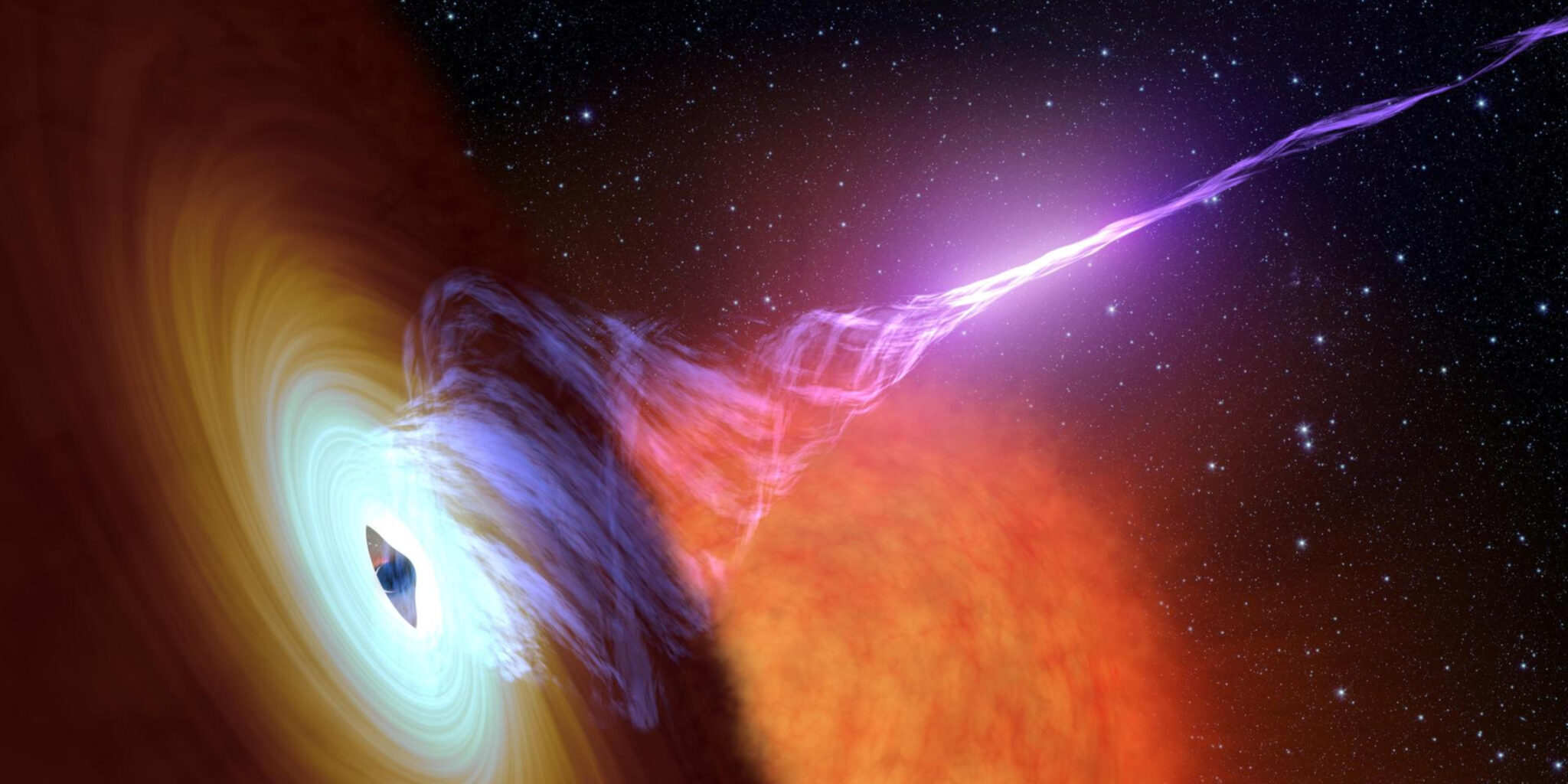 This story is Part II of a two-part series drawing from our recent research review on emergence. Read Part I.

Ahmed Almheiri sounds like he is telling a joke: “What would happen if you threw a giraffe and an elephant into a black hole?”

The punchline, however, has yet to be decided. In fact, working it out has taken physicists the best part of fifty years. But while there’s still no definitive answer, hints from an unlikely place — the study of exotic superconductors in the lab — are helping string theorists like Almheiri, of the Institute of Advanced Studies (IAS), in Princeton, New Jersey, move towards consensus. The odd connections between black holes and quantum systems may even lead to basement lab experiments that can test ideas about the cosmic crunchers.

One major puzzle about black holes, dubbed the information paradox, was first identified by Stephen Hawking, in the 1970s. Hawking had calculated that black holes shrink over time, radiating energy.

But if a black hole eventually evaporates away entirely, what happens to the information about the items it swallowed? Does that disappear too?

Hawking originally assumed that it did, but this upset many physicists because the laws of quantum theory do not allow information to just vanish from the universe. The alternative was that quantum theory is correct and this information is somehow encoded into the escaping radiation — so by studying the radiation, you could infer whether or not the hole had once chowed down on an elephant or a giraffe. The trouble with this idea was that, as far as most physicists, including Hawking, were concerned, the radiation was just like heat emanating from a hot coal. It was random and so it couldn’t secretly carry any hidden messages about zoo animals, or anything else that may have been swallowed.

The black-hole information paradox split physicists (or at least those that cared about what black holes ate for lunch) into two groups. But one hint that Hawking’s original hunch was wrong, and quantum theory was right, came from a surprising quarter: The SYK model — named after its developers, physicists Subir Sachdev, Jinwu Ye, and Alexei Kitaev — which was originally developed to explain the odd quantum properties of strange metals that become superconductors in experiments in the lab. In these systems, they found, electrons become entangled — linked across the entire material in an unexpected manner. But their model also inadvertently described the gravitational powerhouses that are black holes (see The Black Hole in the Basement: Part 1). Meanwhile Juan Maldecena, also a string theorist at IAS, provided a powerful “holographic” argument that, in general, black holes dominated by gravity can be thought of as equivalent to particles controlled by quantum laws, in certain special scenarios.

“The SYK model was one line of thinking that hinted that quantum theory was right because black holes are just the equivalent of entangled particles,” says Almheiri. Because SYK is a simple, one dimensional model, it is easier to mathematically track information and perform calculations to show that those particles never vanish from the lab, so information about them is never lost. And since these particle systems are theoretically twinned with black holes, “the black holes better not lose information either,” says Almheiri. This was still not a “satisfactory proof” that information is preserved, he notes, because it does not offer a mechanism to explain how the information is saved, “but it is a hint.”

Some caution is needed here. It is perhaps a little presumptuous to talk about the SYK model directly describing particles in a ‘lab,’ since the model describes a simplified one-dimensional version of reality. Maldecena’s holographic conjecture relating black holes to quantum matter is similarly esoteric, involving a universe filled with an abstract strangely curved higher-dimensional space, called an anti-de Sitter space — or AdS space — that looks very different from our own, and has a boundary. So can we really extrapolate about the goings on in our real universe, from such models?

Almheiri argues that we can. “When we study black holes in AdS space, we are trying to learn about the black hole, not about space,” he explains. “It’s like studying a tiger in a cage, rather than a tiger in the wild. AdS space is just the cage.” Yes, there will be differences in the tiger’s behavior, but we can still learn a lot, he says.

And there is plenty that physicists still want to figure out about black holes, so they are thankful for all the tools they can get. Along with the fate of information, in 2012, physicists were hit with a new paradox about the innards of a black hole — a paradox of Ahmed’s own making. In the conventional view, derived from Einstein’s theory of gravity, general relativity, at the black hole’s core lies an infinitely small, infinitely dense singularity. A rocket (or giraffe, or elephant) that fell through the black hole’s surface, or event horizon, would be pulled towards the core by its intense gravity, while being stretched out — or ‘spaghettified’ — until it hit the singularity and was crushed.

But when Ahmed and his colleagues tried to follow the fate of such an unlucky rocket, while assuming that the laws of quantum theory held strong, their calculations suggested that so much energy would be released as the rocket hit the event horizon, it would create a wall of fire, burning the rocket up. Nothing could ever reach the black hole’s core. This hypothetical “black-hole firewall” stood in stark contrast to the predictions of general relativity, and caused a stir among physicists. “It was a whirlwind,” recalls Almheiri, who was still a student at the time the team made the discovery.

Nearly a decade on, Almheiri believes that physicists are closing in on a solution to both the firewall and information paradox, which explains why firewalls do not exist, and how information is preserved. It boils down to a deeper analysis of entanglement, the weird quantum phenomenon that can link particles, so that when measured, their properties always sync up, like two coins that always land with the same side up, whenever tossed. Physicists in labs have exploited this ghostly influence to teleport information between two distant, entangled particles. This teleportation process can be modelled in the SYK picture, where — thanks to the equivalence between quantum particles and black holes — it has a direct dual process relating to black holes; teleportation is equivalent to a wormhole appearing as a short-cut through space, linking two distant black holes.

Using Maldecena’s holographic conjecture to do a more detailed analysis, some string theorists have shown how the radiation emanating from a black hole can appear to be random, yet can still be intimately tied to the black hole’s contents. Calculations predict that “if you do a sufficiently complicated experiment on the radiation outside the black hole, you can create a wormhole into the black hole and learn what happens inside it,” says Almheiri. In this picture, the radiation outside is entangled with the interior, but from the outside the radiation still appears random, just as Hawking originally suspected. It’s like having only one of the twinned pair of entangled coins in your hand, and tossing it. The outcome, heads or tails, is still 50/50. “What entanglement buys you is that once your coin lands, you know the outcome of tossing its entangled partner,” says Almheiri. “But the outcome of tossing your first coin is still random.”

This picture does not get you all the way to explaining how exactly the information about the swallowed giraffes and elephants escapes the black hole, however. That is still a work in progress, but there are tantalizing suggestions that by breaking these wormholes, you can find out about the quantum state of the radiation. “We believe there must be another equivalent picture in which there is little or no entanglement between the radiation and the interior of the black hole, but where we can extract all the information just by looking at the radiation alone,” easy Almheiri.

Jinwu Ye (the Y in SYK) is gratified to see that the SYK model has implications for black hole physics. “When Subir and I worked out the original model, there was no motivation about space-time, string theory, and black holes,” he says. In recent years, the connections have inspired him to turn his hand to studying the quantum version of chaotic effects related to black holes. Chaos theory deals with how sensitive a system’s evolution is to tiny initial changes, often popularized by imagining how a butterfly flapping its wings could cause a hurricane across the globe.

For Ye, what’s intriguing is that quantum chaos is beginning to be tested in the lab. Physicists have proposed experiments that exploit the duality by using cold atoms, quantum optics, and rudimentary quantum simulations to test the SYK model and probe further black hole mysteries. Almheiri cautions that such proposals, though impressive, are in their infancy and may take time to bear fruit.

But Ye remains optimistic. “Can we one day do some experiments in the basement and get a lot of information on black holes?” he says. “To me, that’s the exciting possibility.”