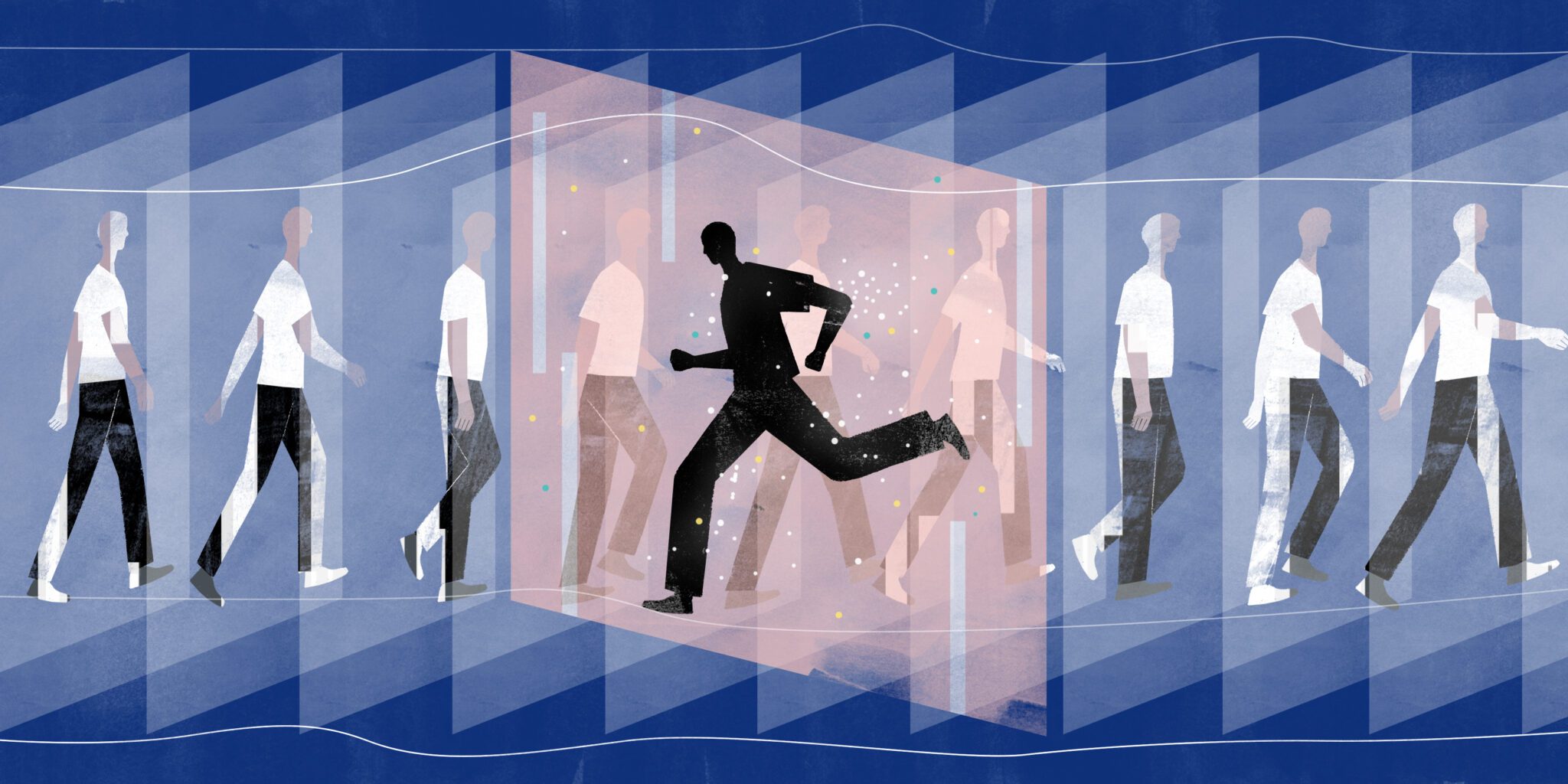 Like many, Emily Adlam is a fan of the addictive Japanese logic game Sudoku, which requires players to place numbers into a square grid, constrained by a few simple — yet often fiendish — rules to obey. But when Adlam, a physicist at the University of Western Ontario, looks at a particularly gnarly puzzle she sees something most of us do not: the inspiration for a time-twisting model of reality. In her “Sudoku universe,” events and choices in the present moment are not solely determined by causes in the past, but can also be affected by influences from the future.

“The rules in Sudoko don’t start on the left of the grid and travel to the right — they apply to the entire grid at once,” Adlam explains. She coined the term Sudoku universe because she believes it is similarly wrong to think of influences only rippling from the Big Bang outwards in one direction through time, as causes in the past lead to effects in the future. Rather, the laws of physics apply to everything — past, present and future — “all at once,” she says.

Adlam’s work builds on a longstanding program investigating “retrocausality”— in which causes can generate effects both forwards and backwards in time — that has attracted a small but dedicated band of physicists and philosophers over the decades. It was originally proposed to explain some of the paradoxes seen in the microrealm, which is governed by strange quantum laws. But retrocausality also chimes with a view in which the distinction between past, present and future is an illusion, devised over a century ago by Einstein, when he developed his theories of relativity, redefining the relationship between space and time. As such, proponents argue that a retrocausal rewrite of quantum theory has the potential to slot together neatly with relativity, allowing physicists to finally bring together these two cornerstones of physics, which thus far have eluded unification. It may also provide new insights in the debate over how the laws of physics can be compatible with human free will.

Retrocausality goes against our deepest instincts, admits Adlam. “It doesn’t feel natural because we all have temporally directed experiences — our brains have been set-up to work this way,” she says. But, Adlam argues, the time asymmetry we see in everyday life could have emerged from an underlying layer of reality where time is symmetric. “We shouldn’t extrapolate from our experience to the fundamental picture,” she says.

One of the most compelling reasons to believe in this time symmetric view comes from the early twentieth century when Einstein developed his special theory of relativity. Einstein posited that time is just another dimension, like the three dimensions of space, explains Ken Wharton, a physicist at San Jose State University, in California. Einstein’s relativity had a further restriction: nothing, not even information, can travel faster than the speed of light. “If that’s true and you take this literally, then the universe has a 4-dimensional structure,” says Wharton. Physicists imagine eternity encompassed in a “block universe”. All events that ever occurred and all those that will ever take place are laid out across the block. What one observer experiences as the present “now” is a slice through that block.

This block universe picture was on Huw Price’s mind back in the 1970s when, as a student, he attended a lecture on the weird behavior of particles in quantum experiments. According to quantum theory, a particle’s properties are only set at the moment it is measured. Quantum particles can also be in two places at once, and multiple particles can become entangled — seemingly able to sync their properties simultaneously, when one of them is observed, in defiance of Einstein’s prescribed limit on how fast information can be transmitted between them. “At some point the speaker said, ‘Of course, we assume the behavior of the particles is not affected by future measurements,’” says Price, now a philosopher of physics at the University of Cambridge, UK, who received a Templeton grant to investigate the nature of time. “And I thought, ‘but why not, when the block universe tells us the past and future are on an equal footing?’” says Price.

Price did some digging and found that back in the 1950s, a French physicist called Olivier Costa de Beauregard had published a retrocausal interpretation of quantum physics, in which the behavior of particles in the present can be affected by measurements of the particle made in its future. Price travelled to France to see him and learned that he had come up with the idea a decade earlier, but delayed going public because his supervisor, the quantum pioneer Louis de Broglie had warned him, “it was too crazy!” Today, Price, Adlam and Wharton argue that while retrocausality runs counter to intuition, if you don’t accept it, you are forced to make far stranger claims. “If we don’t look to the future as an explanatory resource for quantum physics, we are pushed to more crazy pictures and tie ourselves in knots trying to come up with explanations,” says Wharton.

A case in point is the celebrated “double-slit experiment,” which was first carried out in the early nineteenth century and initially demonstrated the wave nature of light. It has since been used to show that light can also be thought of as a beam of particles, or ‘photons,’ which can behave very oddly indeed. In the test, physicists fire laser light at a barrier that has two narrow slits cut out of it (see “The Double Slit Experiment,” part a). This light acts like a wave that passes through both slits and ripples out beyond the barrier. Those ripples interfere with each other creating a characteristic interference pattern, which in turn generates a series of light and dark stripes on a screen placed on the opposite side of the barrier (part b). 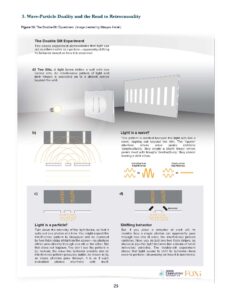 The quantum fun begins when you turn down the intensity of the light beam, so that the laser spits out one photon at a time. Now, you might expect that a single particle can only pass through one slit or the other. If so, you should no longer see an interference pattern on the far screen. Instead, two thick stripes should build up on the screen, directly lined up with the slits (part c). That does not happen, however. Instead you still see the interference fringes (show in part b). It’s as though even single photons are somehow able to pass through both slits at once, interfering with themselves.

But, when you switch up the experimental conditions to try to work out how a photon can take two different routes at the same time, things get weirder still. If you place photon detectors at the slits to try to catch the photon in the act of traveling along two paths simultaneously, the interference pattern vanishes. Instead, the photons behave like good little particles, only passing through either one slit or the other, building up two thick dark stripes on the far screen (figure d). “Every time you look, the photon goes through one slit or the other,” says Wharton. “But if you don’t look, it looks like it went through both.”

This bizarre experiment lends itself naturally to a retrocausal explanation, Wharton argues. “That decision of what you will do”—choose to watch where the photon travels or not—“influences what path the photon takes from the outset of its journey,” he says. Your future choice seems to influence the earlier past behavior of the photon, retrocausally.

Phrased in this way, retrocausality seems plausible. Yet many alternative interpretations of quantum mechanics have been bandied about over the decades and while retrocausality has a dedicated minority of followers, it is not favored by the majority. “That’s because our program is still in its infancy, while the alternatives are much more fully developed,” says Wharton. He, Adlam and Price are now involved in various projects to try and flesh out the model and create a more rigorous mathematical formalism.

Earlier this year, Wharton and Price posted a paper, which has yet to be peer reviewed, re-analyzing recent lab tests of entanglement. They argue that a retrocausal picture can provide an explanation for how two particles can seemingly influence each other instantaneously, without violating Einstein’s speed limit. In the standard causal view, at the moment one particle is measured, its properties and those of its entangled partner become set and synced with each other. This holds true, and has been confirmed in the lab, even if that partner particle is so far away that information about the measurement taking place could not have had time to travel across space between the two particles, unless it traveled faster than light. But in the retrocausal view, influences from the measurement of the first particle can travel back in time, without violating the light-speed limit, back to the point in the time when the two particles were close enough to become entangled, causing them to sync up their properties in the past.

Adlam admits it will be tough to design a retrocausal model that can make testable predictions, especially given that some of the information needed to understand the present may depend on future actions. “The real test is which interpretation of quantum theory helps us make future progress in uniting quantum theory and relativity,” she says.

Another challenge will be to explain why we do not experience retrocausality in everyday life. Wharton offers an analogy to explain how a macroscopic arrow of time might emerge from an underlying time symmetry. Imagine standing next to a glacier: “You will feel colder on the side with the glacier and warmer on the other side,” he says. This temperature gradient was not caused by a fundamental asymmetry in space, but because of the presence of the glacier. We should think of the Big Bang as being like the glacier, generating a gradient in time. “The Big Bang imposes this temporal structure,” Wharton says.

This may help explain how our experience of a direction in time emerges, but what about that other thorny mystery that philosophers have long wrestled with: the emergence of free will? If the Sudoku universe is set from the outset, and — at the microscale, at least — present events can be influenced by future decisions, is our present ‘freedom’ shackled by a pre-existing future that is controlling us now?

This is the wrong way to think about retrocausality, say both Wharton and Adlam. Firstly, philosophers have long debated whether our actions are truly free, or whether all our current actions are determined by causes in the past. “Retrocausality is no worse for free will than the clockwork universe and philosophers argue that free will is compatible with that picture,” says Wharton. Adlam recently wrote a paper discussing the topic and takes things a step further. With retrocausality, your actions now might be influenced by the future, but that also means that your current actions can have an effect on the past that, in turn, went on to influence the present. “In that sense, it is more participatory, your actions and causes and effects go back and forth,” says Adlam. “Maybe that can give you free will again.”

And what would Adlam choose to do with that new found freedom? “I do like Sudoku puzzles,” she says, adding wistfully, “though research does not always leave me much time for them!”