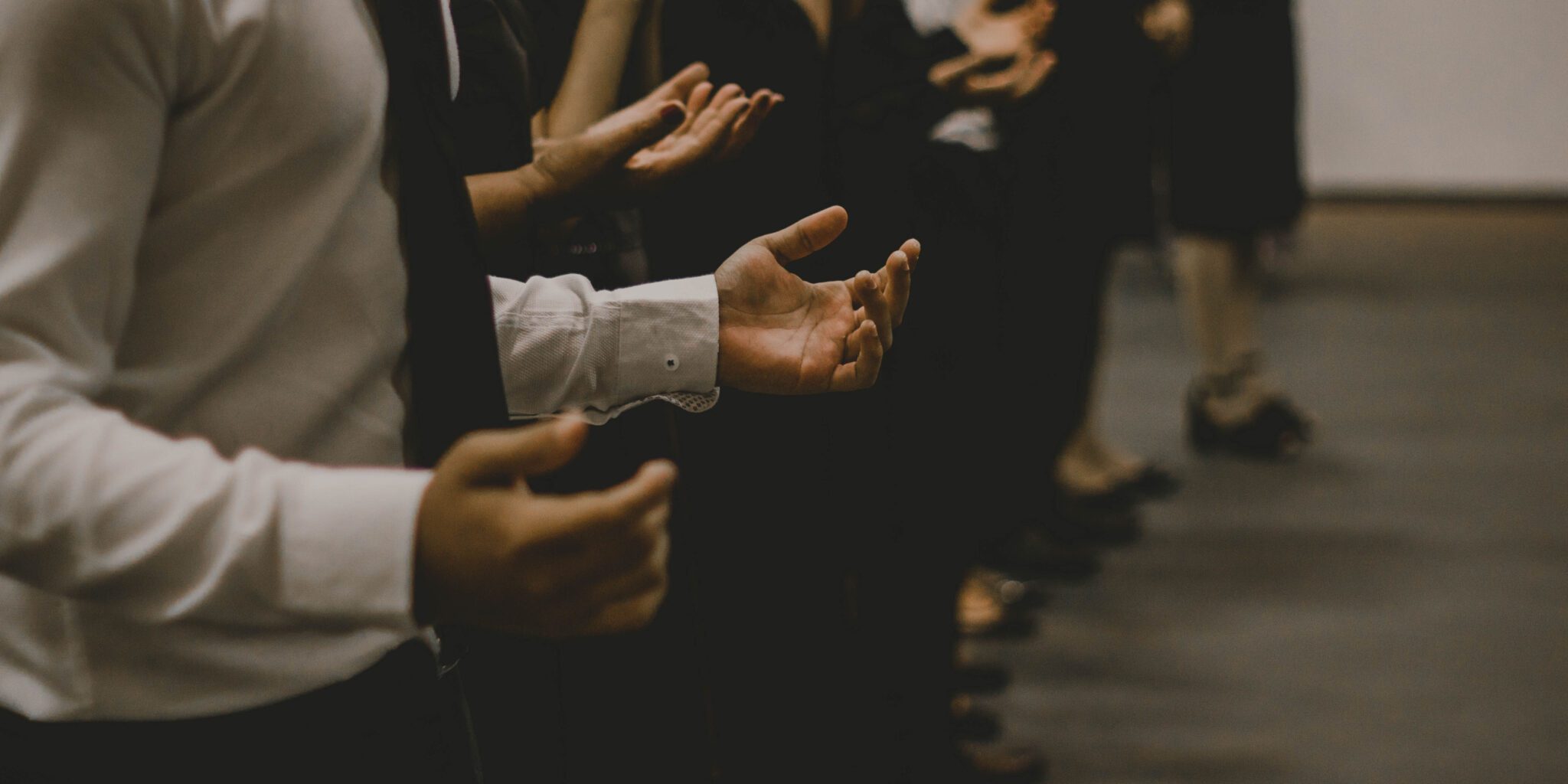 The past two-plus pandemic years have shifted everything, church included. Churches initially scrambled to live-stream their services, with many now comfortably settled into hybrid formats for the long term. Physical church attendance is down compared to pre-pandemic levels, but many people who formerly sat side-by-side on Fridays, Saturdays, or Sundays are still joining together to worship—they’re just doing it remotely. A recent Pew report found that as many as 21 percent of worshipers still substitute virtual attendance for in-person worship. The Christian Barna Group reported similar findings: one in five Christian adults primarily tunes in to services online, with one in four mixing online and in-person worship.

There are many upsides to the rise of virtual church. At the top of the list: protecting the vulnerable and immune-compromised. Services have become more accessible and therefore more inclusive, particularly for people who have difficulty leaving their homes due to physical, transportation, and time constraints. At the bottom of the list ranks convenience—both a blessing and a curse in our era of instant gratification. On the flip side, something essential is lost when congregants only congregate remotely. Beyond social engagement and deepened relationships, believers miss out on embodied worship: that vital experience of corporate, physical posturing.

Virtual worship lends itself to what theologian W. David O. Taylor calls “soul only” worship. “This approach prioritizes the invisible activities of the heart and mind over and against the visible activities of the body,” Taylor writes. “According to this mindset, the ‘real’ action of worship takes place in our immaterial spirits, not in these very earthy frames.”

There’s a part of us that naturally intuits something is wrong with this “soul only” approach, a part that knows something just feels right about bowing your head in prayer or closing your eyes to absorb scripture reading or lifting your hands to receive a benediction.

Psychologists have long known that our thoughts, emotions, and behaviors are grounded in our physical states, and vice versa. But this exchange between inner and outer hadn’t been studied empirically in a religious context—until now.

Dr. Patty Van Cappellen directs the Belief, Affect & Behavior Laboratory at Duke University. With support from the John Templeton Foundation, Cappellen studied the role bodily positions play in religious experience. With little existing data on the embodiment of worship, Cappellen’s research is groundbreaking. We spoke to her about common worship postures, why we adopt them, and why it matters.

Jolley: How did you get interested in this line of inquiry?

Cappellen: There is this reciprocal influence between our mind and our body. How we feel internally is going to show up in our body, but also how we position our bodies is going to influence how we feel internally. I didn’t really see that work being used in the psychology of religion or in trying to understand how religion affects people. Most of the research in the psychology of religion focused on what’s happening in people’s heads—their beliefs, how rituals affect their cognition—but there wasn’t as much research on the fact that a religious practice is fully embodied. I was interested in documenting more about how people use their full bodies, and [asking,] “Does it matter?”

It’s intriguing that this is an overlooked area of research because, depending on the religious tradition, much of worship is very physical. In a Catholic Mass, for example, there’s kneeling and standing and genuflecting and processing forward to receive Communion.

When you start to think about it, it becomes so obvious. Think about Muslims praying multiple times a day and doing the sequence of postures.

But, I realized no one is standing on their head to pray. Why is that?

Yes, why? What did you discover about why people gravitate towards certain types of postures while worshiping?

I have a few different explanations. One is that our body postures communicate how we feel internally. Postures really serve as communication between the person and their God. They’re going to use postures that complement what they’re trying to convey in their thoughts or even their verbal prayers.

In Christian texts, you see that there’s a lot of discussion on the kinds of posture you should adopt, and what it looks like to have a more reverent approach to worship. [Posture] signals, I’m part of the group. I’m coming with this reverent approach to my faith. I think this kind of group membership signaling is important.

In your research, you discovered that certain worship postures are associated with specific emotions or attitudes. What are some of those associations?

I organized the postures into three groups. One is oriented upward: you look up, you raise your hands, you open your body. Another group was more downward: looking down, kneeling and constricted, [with] your hands closer to you. The third group is a neutral posture, just sitting and listening. That’s a big part of the time during worship as well.

[Among Christians,] we found that people who adopted more of these upward and expansive postures [during a church service] reported more positive emotions, higher arousal, and higher excitement in general. It was associated more with worship as opposed to prayer, however people define that. Downward and constrictive postures are generally associated with the themes of prayer and reverence, and to some extent repentance and confession.

Did any of those connections or correlations surprise you?

We did two studies where we manipulated people’s postures and asked them to stand in this upward, expansive pose, or this downward, constricted pose. We found that the upward-expansive pose increased positive emotion. This was important because we wanted to have an experiment showing that when we causally manipulate someone’s posture, it has an effect on their emotions—it’s not just correlational.

When we manipulated those postures, it changed people’s physiology. When we asked participants to be in this upward-expansive posture, we saw that there they showed increased cardiac vagal reactivity. What does that mean? When you breathe in, your heart rate naturally increases a little bit. When you breathe out, it beats a bit slower. That’s the influence of the vagus nerve, which is part of your parasympathetic system—your “rest, digest, and connect” mode. We wanted to see if this [posture] would activate this parasympathetic mode. And we found that when people were in this [upward and expansive] position, they showed increased cardiac vagal reactivity compared to when the same people were in this [downward and constrictive] position.

These results came from studying Christians in the United States. What variations or similarities did you find across faith traditions?

We asked people of different faiths: Muslims in the U.S. and in Turkey—because we also wanted to ask in a Muslim-majority country—Hindus in the U.S. and in Southern India, and Christians in the U.S. We asked them to imagine themselves adopting different prayer postures, which should trigger similar [physiological responses]. It’s like when you imagine yourself biking. You don’t realize it, but your body is kind of geared for biking. It activates related thoughts and feelings.

So we asked them to imagine praying in different postures: these upward and expansive or downward and constrictive postures. We found pretty good agreement that up-expansive is about excitement and dominance. That was interesting. Some people don’t like these up and expansive postures; they don’t think it’s respectful. And I’ve been wondering if it might be because people associate that with high dominance. We also found agreement that these down and constrictive postures are about humility, examining your difficulties.

We’re in an age of many people worshiping online, alone and in the privacy of their own homes. Do you have any sense of what’s lost when we divorce the embodied, collective experience of worship from the inner, solitary one?

Probably meaning or faith at the cognitive level is the same. But at the social and emotional level, I think we’re missing synchrony in gestures and movements. We’re missing out on the sharing, like looking right and left and saying hello. But I think it goes deeper. It goes into synchrony of movement. We know from psychology that [synchrony] has an effect on the impression that you belong to your church, but also on this collective effervescence. The fact that we’re all together and doing things at the same time and sharing emotions is reinforcing faith. It’s part of the mechanisms through which people believe more and more, and people come back. So I think that’s critical.

At the emotion level, [being together in person involves] sharing emotions, but also letting others communicate emotions to us. We get influenced by others’ emotions. And our emotions, because they’re clearly communicated in our whole body even when we don’t realize it, also influence others. There’s kind of this mix of influences at the emotional level that increases or intensifies people’s emotions. Again, I think the intensity of the emotions is what is important for reinforcing faith, making people come back. It’s a memorable emotional experience, whereas virtual [worship] is kind of dull. It could be problematic, I think, ultimately, for continued practice.

Learn more about research on the Science of Prayer.