How Awe Transforms Us From the Outside In

Was there ever a time when humans didn’t pause to admire a flaming sunset or the Milky Way on a clear night? For an experience that feels ancient, awe is, among fields of scientific study, quite young. Psychologists only began paying serious attention to awe in the early 2000s, though theologians and philosophers have explored the subject for centuries.

Research from the past 15 years helps explain what experiences cause our jaws to drop and how awe may play a role in a meaningful life. Science has identified different elicitors of this feeling, from natural beauty to religious epiphany to art. (It doesn’t have to be the Ode to Joy; anything from Gaudi’s architecture to live jazz can do the trick). Even “threat-based” stimuli can trigger our awe reflex, which may explain why humans are both drawn to and repelled by scenes of volcanic eruptions and wildfires.

Awe turns our gaze outward and upward, whether toward mountains or the spiritually transcendent. It’s this trait—reduced focus upon the self—that helped awe evolve. Psychologists believe it serves an important group function by making humans feel more connected and less self-motivated. This function was just as important for communities that worked together to hunt prey or fend off predators as it is today. Awe’s ability to turn us away from ourselves and toward others is a building block for crafting a more interconnected, meaningful life. 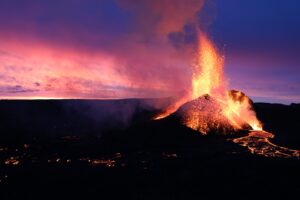 Grasping the vastness of awe

How do scientists define awe, that ephemeral experience that leaves us feeling smaller and the world feeling larger?

In 2003, psychologists Dacher Keltner and Jonathan Haidt proposed two phenomena that characterize awe-filled experiences. First, there’s “perceived vastness,” the sense of confronting something much larger than ourselves. Standing at the edge of the Pacific Ocean might bring this on, but so could sitting in a classroom learning about black holes. Whether physical or conceptual, a sense of immensity is the first component of awe.

Second, awe evokes a “need for accommodation,” meaning it expands the boundaries of our understanding. It forces us to make cognitive adjustments. Intense awe forces us to accommodate novel knowledge or lived experience, and this accommodation can transform us over the long haul.

In Man’s Search for Meaning, psychiatrist and Holocaust survivor Viktor Frankl shares his story of awe-fueled transformation. Shortly after the war ended, plunged deep into despair and grief, he was walking along a country road. Birds rose singing from the fields around him. “There was no one to be seen for miles around,” he writes, “there was nothing but the wide earth and sky and the larks’ jubilation and the freedom of space.”

As Frankl observed the meadows extending in every direction, he suddenly dropped to his knees. For a timeless stretch he stayed there, lifted outside of himself, with only a verse from the Book of Psalms filling his mind: ‘‘I called to the Lord from my narrow prison and He answered me in the freedom of space.” When he finally stood and began walking again, he was a different man. As he later wrote, “…on that day, in that hour, my new life started. Step for step I progressed, until again I became a human being.”

As Frankl attested, awe takes place not just in the mind but also the body. It can bring us to our knees or cause goosebumps to pucker our arms. People who talk about feeling chills while listening to Mozart aren’t speaking in metaphor; awe brings on a range of physiological effects. These sensations are a key part of the awe experience. But more important than temporary physical reactions are the ways awe leads us to a more connected and selfless way of living.

Shrinking and expanding the self

Paradoxically, awe makes us feel smaller while simultaneously opening us to a larger way of living.

Multiple studies point to the way awe experiences create a diminished sense of self, an effect that scientists have dubbed “the small self.” By shifting focus off ourselves, awe serves as an antidote for outsized self-importance. In a 2015 study, for example, participants viewed different slide shows: one showing scenes of immense natural beauty, one with unimpressive nature scenes, and one with neutral images. The group that viewed slides full of natural beauty reported a smaller sense of self than other participants. At the same time, awe can make us more aware of how expansive the world is, imbuing us with a sense of wonder. It reminds us that we are in the presence of something majestic, whether a mountain range or a higher power.

Awe also connects us to others and to humanity at large, giving us a more accurate perception of our place in the world. A study of 1,535 middle-aged adults found that those who felt more awe of God also reported a greater sense of connection with other people. Those who are more dispositionally prone to awe are rated as more humble by their friends. And when psychologists induced awe in controlled studies, they found that awe-inspired participants were more likely to acknowledge other people’s contribution to their personal successes—a sign of both humility and interconnectedness.

As researcher Jennifer Stellar and her colleagues write, “Awe, which arises as one confronts the vastness and complexity of the world, helps individuals gain perspective on their importance and place within it.”

Rather than causing a “small-self” effect, maybe it’s more accurate to say that awe leads to a “right-sized-self” effect. Experiences that make us shiver with wonder also lead to a more realistic understanding of our place in the world. By reducing selfish concerns, experiencing awe can lead to a more meaningful and connected kind of life. In this way, awe both diminishes and expands us.