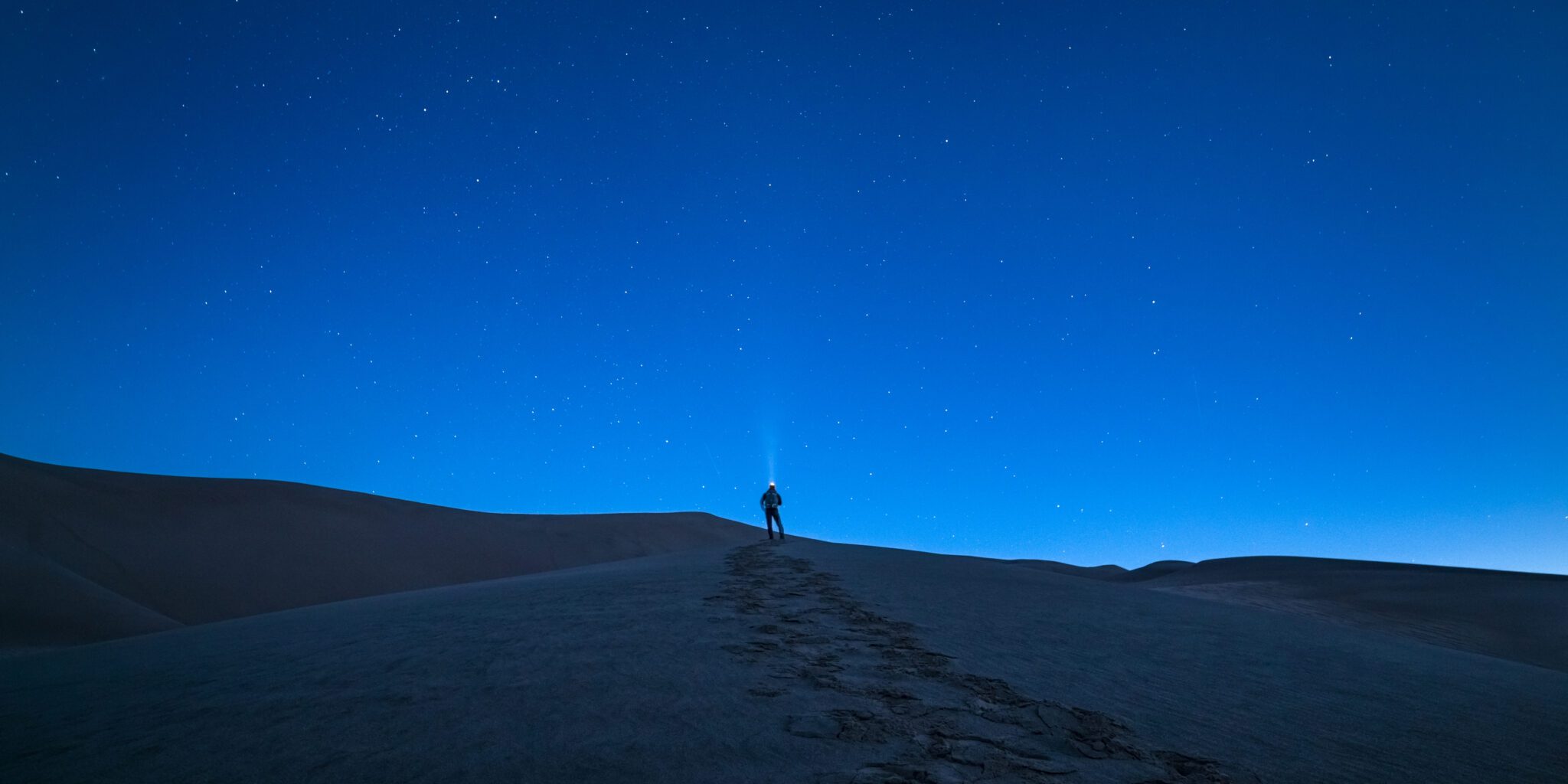 The most important moments of our lives happen in silence: in the development of life inside the womb; on the quiet walks when we have a flash of self-awareness and come to know something essential about ourselves for the first time; at the mysterious moment we fall in love with someone; even in the precious moments before death. These things happen in the space between the noise—in the silence of our own hearts.

Modern society is making it harder to fully experience or appreciate these moments, though. Almost everything conspires against them. Noise presses in on us from every side. There are strong incentives to become yet another voice, competing for attention.

Yet our fragmented and divided culture is often still united by silence.

Times of silence are one of the few remaining ways that we express a widespread, shared experience of sacredness. On the anniversary of September 11, there are sports stadiums packed with 60,000 or more fans that pause to observe a minute of profound silence broken by the flyover of jets. Numerous heads of state have observed a minute of national silence to honor lives lost during the Covid-19 pandemic. On a recent trip to Gettysburg, my wife told me that after months of studying the battle in her high school history class, she and her classmates took a trip to Gettysburg and walked across the field in silence, reflecting on what they had learned and what had happened there in a less heady and more visceral way. They were some of the most transformational minutes in more than twenty years of formal education.

Silence functions like a universal language. It conveys gravitas, encourages reflection, and allows information and experiences to sink in. Why, then, do we limit structures of silence to the remembrance of national tragedies? They should be built into the fabric of our institutions, our cities, our culture.

Most people in modern economies admit to being overwhelmed with content. But they are still consuming more of it. Content producers, from influencers to streaming services, are making money by satiating the growing demand for more. We are in a non-stop and endless feedback of content, and we have no hope of real progress unless we find a way to step outside of it.

The answer to the flood of content is, for many entrepreneurs and producers, to make more content. This is often done with the best of intentions. Because so much of existing content is low-quality or superficial, they reason, there is a need for something different, something better—and thus creating new content will be a positive contribution. But they are fighting fire with fire.

It’s tempting. There is a natural desire to make our voice heard in the cacophony. When confronted with loud voices, discord, and disagreement, the reflexive (and mimetic) response is simply to get louder. To say more, and to say it more forcefully. To do more, and to do it faster. To add rather than to subtract.

But what if the coming revolution is a silent one that will be led by those who, in the face of this increasing activity and ear-splitting noise, choose the anti-mimetic path? Who grow quieter and more intentional?

The great media theorist Marshall McLuhan famously wrote, “The medium is the message.” That means, in part, that the vehicle through which content is received determines how it is perceived and the way in which a person engages with it.

Anyone who has witnessed two or more people on Twitter debate such weighty topics as, say, God, knows how quickly the words and the conversation seem to lose contact with the object of discussion. The big questions simply don’t lend themselves to the medium. Social media is designed to cycle through content rather than encouraging people to sit with it, to understand it at a deeper level. New content is the fuel on which these platforms run.

Instead of focusing on new content, we should focus on new forms. The most important question to ask is: what are the new forms out of which better content, qualitatively different, might emerge?

I believe the best way to do that in the coming years will be creating new spaces, third places, where people can come together with none of the social anxiety associated with typical conferences and events saturated with content. We can find ways to make contemplative, re-creative experiences both attractive and accessible to more people.

These experiences have not been tried and found wanting; they have simply never been tried by the vast majority of people. But those who have been fortunate enough to participate in a well-run contemplative retreat often describe it as a life-changing experience.

I believe that we can build something that offers people a chance to participate in these new types of experiences, punctuated by silence and other opportunities for reflection. And they must be offered—because they no longer emerge naturally in the world that we live in. In other words, people don’t naturally fall into them or opt-in to them. They cannot. But if they are offered at scale, there is the potential for widespread and profound cultural change.

Making this type of re-creative retreat a standard part of an organizational wellness benefits would be one way to give people the respite and space they need to live more intentional lives. Companies that truly care about the integral wellness of their people should give, as a standard benefit, the opportunity for at least three days of paid retreat time each year. Americans are continually leaving more than 700 million hours of paid time off unused each year. Structured, curated retreat experiences can help people who lack the will to take the time they need, leading to rejuvenated people who have a clearer vision of their purpose and their alignment with the organization’s mission That could benefit the individual and the collective alike.

This practice will require, but also cultivate, intellectual humility.

“I have discovered that all of the unhappiness of men arises from one single fact, that they cannot stay quietly in their own chamber,” wrote Blaise Pascal in his 1654 work, Pensées. The ability to sit silently in a room is the mark of a healthy person. But one recent study showed that people would rather be electrically shocked than sit alone with their thoughts for as little as six to fifteen minutes. There is a pandemic of noise that is causing us to lose our faculties of reflection. It is reflection, not experiences, that lead to learning.

Can intellectual humility be cultivated? I believe so. Intellectual humility recognizes the limits of one’s intellect, how easily it errs, and the sheer number of things that we do not yet know. But intellectual humility is also the acceptance that we often need more time to digest and understand something—even of our own experiences in life—before moving to the next thing. And one way to learn this lesson is having to sit with something, including yourself, for more than fifteen minutes at a time. If people aren’t given a space in which to do that, it may never happen.

Now I am not sure if Pascal’s statement is true—at least, I am not convinced that all of humanity’s problems stem from this inability—but I do know that at least some of my own problems have been recognized and ultimately addressed because I have been able to go on an annual silent retreat for most of the past twelve years. I only attended the first because I was encouraged to by a wise mentor, and it was planned and made frictionless for me; it was not something I would have chosen on my own. And yet this practice has changed my life.

It is unfortunate that these structured experiences of silent reflection are so rare in today’s world—and I often wonder how different the world might be if they were not. But they need not be so rare. We can change the culture not by saying more, but by creating better spaces of encounter.

I’m willing to bet that Pascal’s observation about what ails humanity is at least partially right, and that his proposed solution—sitting quietly in a room alone—is something that most people, including me, need help doing.

I’m committed to making these experiences more accessible, more affordable, less intimidating, and more enjoyable, and I am seeking collaborators. We might start, for instance, by organizing curated experiences in beautiful places that are rich environments for intellectual and spiritual inquiry supported by a global community of practice.

This movement, if it is to get off the ground and be sustained, would do more to cultivate the virtue of intellectual humility than anything that anyone might write—including this essay—because it will be a new form of engagement with the world.

Luke Burgis is Professor of Business at The Catholic University of America in Washington, DC, and author of the book Wanting: The Power of Mimetic Desire in Everyday Life

The Transformative Power of Humility