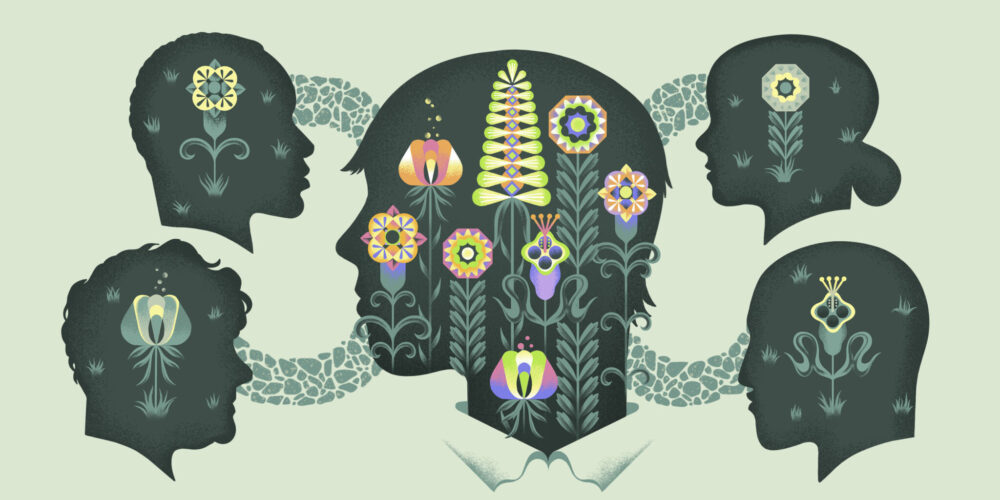 Increasing humility one conversation at a time. Illustration by Marina Muun.

Eighteen years ago, Hebrew University psychologist Avraham Kluger tried to articulate a time at work during which he felt full of life. He came up empty. “I was using my ego to prove that I was smarter than the other guy and not following what I was really interested in,” he said. It sparked an existential crisis over a period of three years where he explored himself in multiple ways—psychodrama therapy, voice class, storytelling class, etc. He recovered repressed memories of abuse, connected with old friends, and dramatically changed.

As he reflected later, he wondered what facilitated his transformation. “Even my voice changed,” he said. “Former students would say, ‘where has the arrogant professor gone?’ Where’s the suit, the tie?”

“It became clear that my change was facilitated by people listening to me,” he said. So, he adjusted his research to focus on the practice of listening. A professor of organizational behavior at the business school, Kluger even transformed how he taught incorporating listening exercises in his classes.

“Avi’s classes changed what I wanted to do in life. I wanted to finish my MBA,” said Michal Lehmann, who switched paths and began work on a PhD. Lehmann now works as a post-doc in an empathy lab at Hebrew University of Jerusalem. “I didn’t expect to find such materials in a business school. Everything he taught I really felt in my being. I was so hungry for more.”

Inspired by Kluger’s internal change, Lehmann allowed her own personal experiences to fuel questions, which she followed through the academic literature and into the lab. When she gave birth to her first child, she struggled with anxiety and the burden of responsibility. Thoughts raced through her head as she laid in bed one night, and she realized that some things were beyond her control. “I remember feeling huge relief… in just accepting this fact,” she said. “It was still hard, but something changed.”

She started reading psychology literature to help herself articulate what that sense had been. “After reading a few papers, I realized that at least a part of what I was feeling there was humility—realizing that you’re a part of something so much bigger than yourself,” she said.

She hypothesized that listening would increase humility not just for the listener but also the speaker. “When you talk, you become more aware of the different parts of yourself,” said Lehmann, referring to work by Guy Itzchakov. Likewise,

“humility involves tolerating the positive and negative of the self in a balanced manner and seeing the entire picture,”

she said, referring to work of Daryl Van Tongeren and others.

In a series of four experiments beginning with an online exercise and leading to conversation partners working in the lab, the research measured listening and humility in multiple ways. “Eventually, one experiment built on the next one like building blocks,” said Lehmann. “Because you prove one mechanism and then you try to prove another paradigm.”

Taken together, the experiments showed that good listening increases the humility of both the listener and the speaker in a conversation, however the effect is stronger on the listener.

When writing their paper, they sought input from Van Tongeren, a psychologist at Hope College. Author of the new book Humble: Free Yourself from the Traps of a Narcissistic World, Van Tongeren describes humility’s role in improving partner relationships and pursuing justice and fairness in society. He helped conceptualize a meaningful narrative from Lehmann’s experiments.

“These results showing the association between listening and humility underscore just how powerful humility is in our relationships,” Van Tongeren said. “Given what we know about the benefits of humility in enhancing relationship satisfaction, commitment, and forgiveness, it stands to reason that active and empathic listening is one way to make our relationships healthier and humbler.”

These studies assert that humility is not just a fixed trait—it’s also a variable that can be activated, a finding supported by other research. Kluger suggests that listening and humility can occur within one relationship but not necessarily be carried out to other relationships. “In other words, we become different people in the company of people around us, which makes us react in one way but doesn’t make others react in the same way,” he said.

While this paper implies that humility may switch on and off in different relationships, Kluger and Lehmann’s continued work attempts to paint a fuller picture to answer lingering questions. At a recent conference, they presented work along with a collaborator, Thomas Malloy, showing that “the way that you are perceived by the members of your family does not translate to your friends or colleagues,” said Kluger.

Kluger is interested in shifting the prevailing thinking from describing a good listener or a humble person to describing a good relationship. If you think someone listens well, there could be something about your perception of the conversation. Or it could be something about them. Or what if there’s a third possibility? “Maybe there’s a chemistry between you and I, a magic,” he said. He wonders if listening can create “a sacred space” between individuals. In the future, Kluger would like to capture this experience between two people through empirical data.

So, our ability to assume a humble posture may strongly depend on who we are talking to. Humility might not be something we maintain alone.

But the effects of increasing humility one conversation at a time could be profound. Kluger concluded, “When (listening) is cultivated, then society will reap the benefits of humility.”