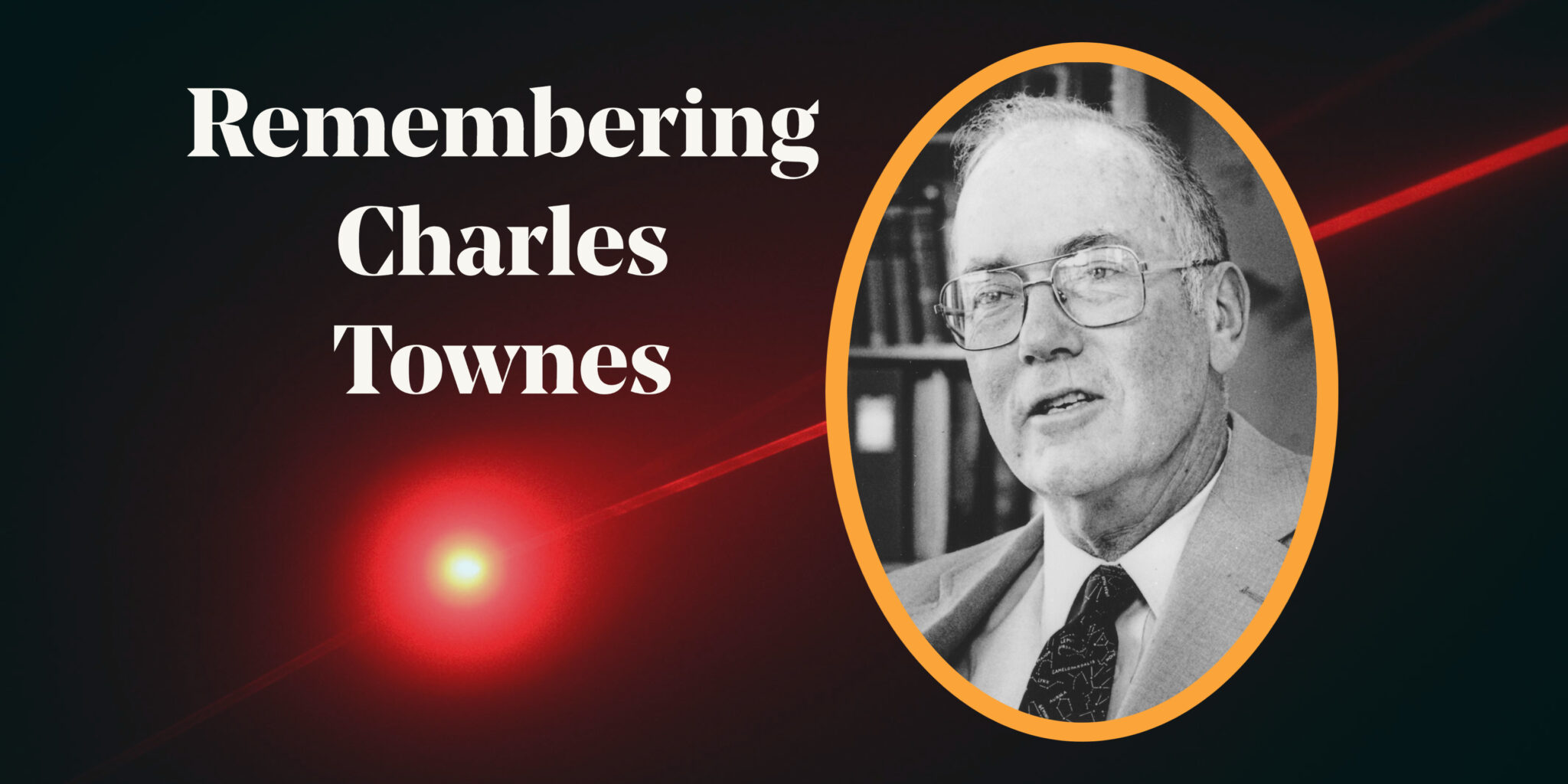 Upon receiving the Templeton Prize in 2005, Charles Hard Townes – the South Carolina-born physicist who earlier received a Nobel for his work inventing the laser – told a story about a philosopher who was asked to define the scientific method. The philosopher thought for a moment, then said:

“It’s to work like the devil to get the answer, with no holds barred.”

This same unrelenting curiosity, Townes said, should be brought to bear in pursuing knowledge not only of the material world, but also matters of the spirit.

A remarkable scientist with indomitable energy – he was known to make visits to his lab at Berkeley into his 90s – Townes was also deeply curious about religion. As a young graduate student, he shared his religious interests with an advisor and was criticized. Undeterred, he continued to speak on faith while working as a physicist. Because of this reputation, in 1964, members of a freethinking congregation in Manhattan invited him to speak on science and religion, and a week later an editor from IBM’s magazine THINK called to ask if he could publish the talk.

It took over a year — and the interruption of going to Stockholm for the Nobel Prize — to wrestle the text to his satisfaction. When it appeared as a cover story in 1966, “The Convergence of Science and Religion” marked a watershed in his career, establishing him as a voice seeking commonality between the two domains. In it, Townes argued that science and religion have a shared quest to understand the universe and must “ultimately be dealing with the same substance.”

“For [science and religion] both represent man’s efforts to understand his universe and must ultimately be dealing with the same substance. As we understand more in each realm, the two must grow together. Perhaps by the time this convergence occurs, science will have been through a number of revolutions as striking as those which have occurred in the last century. Perhaps our religious understanding will also have seen progress and change. But converge they must, and through this should come new strength for both.”

Townes built on these themes nearly forty years later in his Templeton Prize address (pictured above). While the paths that science and faith pursue are different—as with all domains of human inquiry—the goal is the same: addressing the ultimate questions of meaning and purpose.

“I believe there is no long-range question more important than the purpose and meaning of our lives and our universe,”

said Townes. “Sir John [Templeton] has very much stimulated its thoughtful consideration, particularly encouraging open and useful discussion of spirituality and the meaning of life by scientists.”

Then, nearing the end of his life – he died on January 27, 2015 at the age of 99—Townes reflected on the importance of being open-minded when pursuing such deep questions as the meaning of our universe and life itself. He shared how, in his experience, science and religion contributed in complementary ways to discovering this meaning.

“My own view is that, while science and religion may seem different, they have many similarities, and should interact and enlighten each other. …  Science tries to understand what our universe is like and how it works, including us humans.  Religion is aimed at understanding the purpose and meaning of our universe, including our own lives. If the universe has a purpose or meaning, this must be reflected in its structure and functioning, and hence in science.”

‘God Is Laughing With Us’ : The Humor and Joy of Desmond Tutu