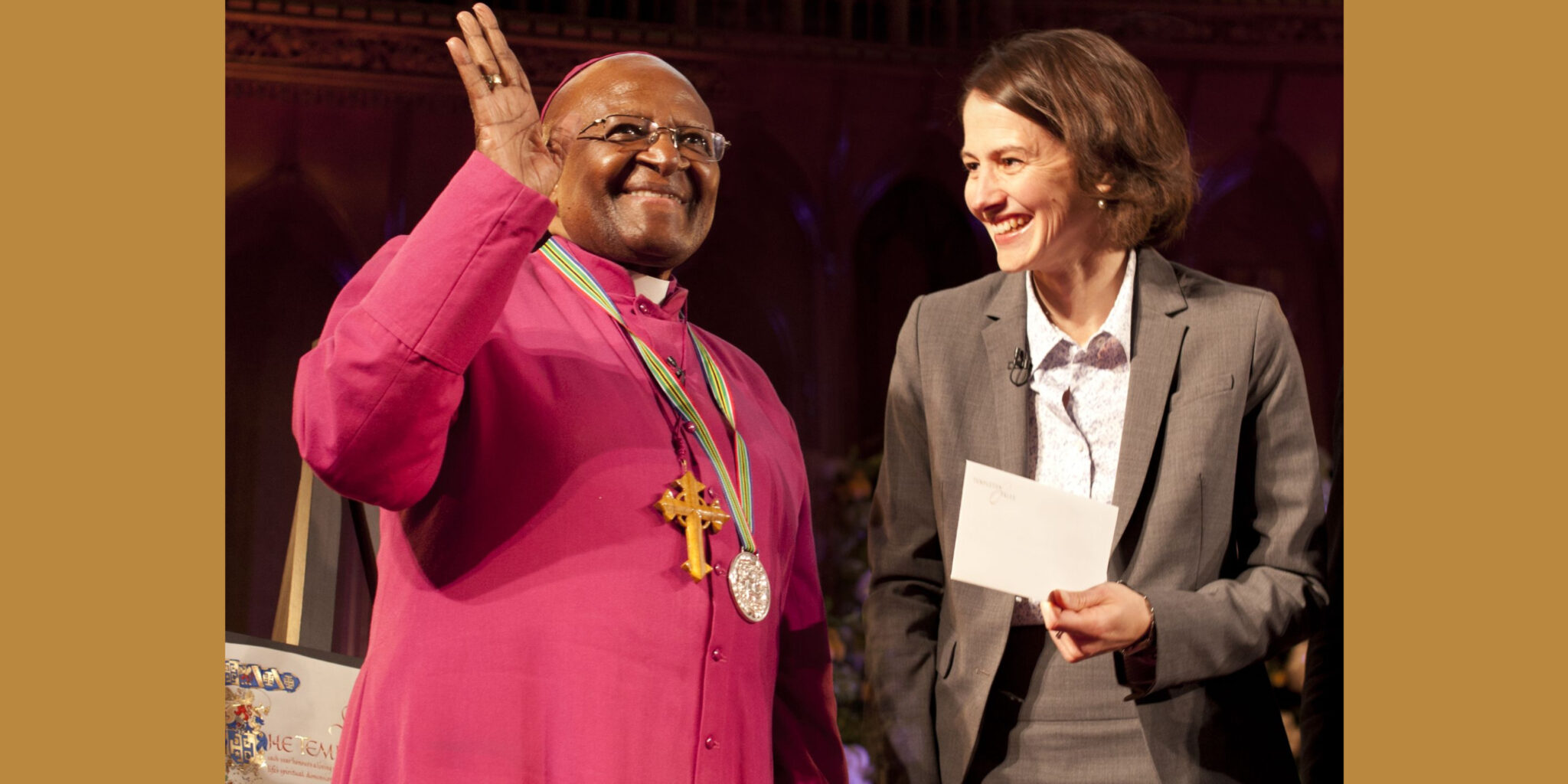 Mischievous Brothers: The Dalai Lama and Desmond Tutu Share the Secret to Joy

This week, the John Templeton Foundation joins communities around the world in mourning the death of the 2013 Templeton Prize Laureate, The Most Reverend Desmond Tutu OMSG CH GCStJ — one of the world’s most revered religious figures and a leading moral voice for peace and justice.

He passed away on the morning of December 26th at the age of 90.

Tutu, the Archbishop Emeritus of Cape Town, was awarded the 2013 Templeton Prize for his life-long work in advancing spiritual principles such as love and forgiveness which helped to liberate people around the world.

He rose to world prominence with his stalwart—and successful—opposition to South Africa’s apartheid regime.  He combined the theological concept that all human beings are shaped in the image of God, known in Latin as Imago Dei, with the traditional African belief ofUbuntu, which holds that only through others do people achieve humanity which, he says, creates “a delicate network of interdependence.”

“By embracing such universal concepts of the image of God within each person, Desmond Tutu also demonstrates how the innate humanity within each of us is intrinsically tied to the humanity between all peoples,” said the late Dr. John M. Templeton, Jr. at the time of the Prize announcement on April 4, 2013.  “He calls upon all of us to recognize that each and every human being is unique in all of history and, in doing so, to embrace our own vast potential to be agents for spiritual progress and positive change.  Not only does he teach this idea, he lives it.”

Archbishop Tutu was presented with the 2013 Prize at a ceremony in London’s Guildhall in front of a distinguished audience that included ambassadors and high commissioners, British faith leaders, members of both Houses of Parliament, and representatives from charities and campaigning groups for Africa.

On receiving the prize, he said:

“Ubuntu – a person can be a person only through other persons.  You can be generous only because you learnt from another how to be generous.  How God longs for us to know that – you know what – we were created for togetherness.  We were created to be members of one family, God’s family, the human family.”

Presiding at the ceremony was Heather Templeton Dill who said: “When our intellectual and moral curiosity are accentuated, we ask questions, we seek answers and then we ask more questions because our answers are never final. There is always so much more to know. Today we honor Archbishop Tutu, a humble and inspiring entrepreneur of the spirit whose life and work capture the ideals Sir John Templeton hoped to promote through the giving of the Templeton Prize”.

On behalf of the Templeton Philanthropies, we extend our deepest condolences to his children and grandchildren and mourn the loss of one of the world’s most beloved religious icons.

“We mourn the loss of a great man whose life embodied faith, courage, and justice and inspired countless people to stand for peace,” said Heather Templeton Dill, President of the John Templeton Foundation. “Tutu’s moral vision was powered not only by his piety, but by a sense of hope and joy that were irresistible to all those who were honored to have met him.