Rabbi Lord Jonathan Sacks on the Quest for Meaning 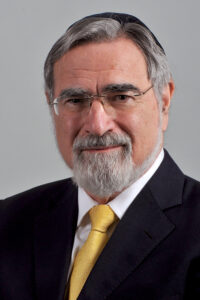 “Life is a story. It is our response to the call of suffering in the world.” –Rabbi Lord Jonathan Sacks, Morality.

The earthly story of Rabbi Lord Jonathan Sacks, winner of the 2016 Templeton Prize, came to an end in November 2020. But his response to the call of suffering — a legacy of religious thinking and powerful personal testimony that poured out over dozens of books and a lifetime of scholarship — continues to echo in the world.

In his 2020 book, Morality: Restoring the Common Good in Divided Times, Sacks devotes a chapter to a topic that concerned him throughout his life: the quest for meaning, which he regarded as a defining concern and crisis for our time.

Finding a sense of meaning, he says, requires commitment and a sacrifice of energy to a cause that is larger than our personal needs and desires for happiness. “Meaning involves the acknowledgement of a world beyond the self,” he says. “An individualistic, I-centered culture will be one in which people struggle to find meaning.”

There are signs of just such a struggle among contemporary Americans. Sacks cites a 2018 Pew survey which showed that while many Americans find meaning in family, others confessed to a feeling of despair.

“I no longer find much of anything meaningful, fulfilling or satisfying,” one person wrote. “Whatever used to keep me going has gone. I am currently struggling to find any motivation to keep going.”

Sacks points to the tragic example of David Foster Wallace, perhaps the most gifted writer of his generation, who took his own life in 2008. Wallace’s writing often surfaced themes of emptiness and the yearning to overcome it. In his final, unfinished novel, The Pale King— set in an IRS back office — he describes ennui and the hollowness of routines as “the true hero’s enemies” and life as a bureaucracy lacking any ultimate significance: “Gentlemen, welcome to the world of reality — there is no audience. No one to applaud, to admire. No one to see you. Do you understand?”

Sacks comments on these pervasive themes in his own work, identifying how Americans seem to have “lost the sense of vocation, the pursuit of meaning, a calling to something larger than the self.”

The answer to such a yearning may be found in many places; for Sacks, the most powerful one is religion, specifically the monotheism of his own Judaism, and the great Abrahamic faiths that sprouted from it.

In his 2011 book The Great Partnership: Science, Religion, and the Search for Meaning, he argues that humans should not be satisfied with explanations that reduce our world to “random happenstance” and the pointless collision of particles; we must strive to tie ourselves to purposes that ennoble humanity. This is not easy, he acknowledges, because the universe “does not come emblazoned with its purpose.” Rather, we must strive to find our calling. For Sacks, that means reflecting on our relationship to the divine.