Did Religion Help the Rise of Civilizations in the Americas?

Religions and the Emergence of Civilizations in the Americas 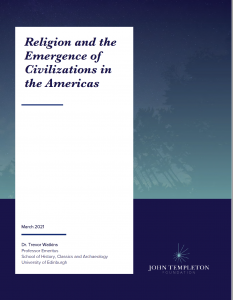 In our contemporary culture, it is often assumed that organized religion is a conservative force that impedes the development of human societies. Depending on one’s allegiances, one may view religion as an obstacle that must be overcome, or as a fortification against society’s descent into chaos. But rarely does anyone stop and ask the question, “To what degree might religion actually contribute to cultural innovation and progress of a society?”

Historians in recent years have challenged the modernist assumption that religious institutions are obstacles to human flourishing. Rather than accepting this generalization as a foregone conclusion, some scholars have treated it as an open question that one can investigate empirically.

To answer the question, our first inclination might be to study the religions and societies with which we are most familiar. However, that approach has its own pitfalls because we are apt to smuggle our unexamined assumptions into our analysis, tilting the scales in favor of the conclusion that we hope to reach. Alternatively, we can study societies of which we have no prior knowledge, try to piece together their worldview and infer how it shaped the development of their cultures. Specifically, we can ask the question, did a particular religious orientation act primarily as a driver of a culture’s evolution, or a roadblock?

Examining Civilizations in Cahokia, the Valley of Oaxaca, and Chavín de Huantár

The research synthesis that follows explores the relationship between religion, innovation, and power in three societies in the pre-Columbian Americas. The time and space that separate these societies is vast— the text discusses civilizations in Cahokia, directly across the Mississippi River from modern St. Louis; the Valley of Oaxaca in Mexico; and Chavín de Huantár in Peru. Archaeological study of these sites has proceeded for many decades, but it has only been recently that scholars have deeply probed the relationship between their spiritual orientation and their socio-political transformations.

Read the full research review on Religion and the Emergence of Civilizations in the Americas written by Dr. Trevor Watkins of the University of Edinburgh.