Have efforts to redefine our perception of wellbeing over the last thirty years been successful? Read the research review to learn more. 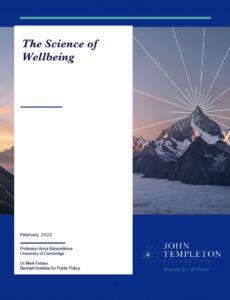 In the zeitgeist of the twenty-first century, “wellbeing” occupies a special place. It is an ideal of personal and communal living, as well as a concept to help us move beyond the tired old categories of progress — such as money, fame, and the gross national product.

But despite the noble sentiment around redefining our perception of wellbeing, what exactly it is and how we should measure it remains elusive, and certainly not for lack of effort. The last thirty years have seen a huge rise of investigations into wellbeing in the social sciences and humanities. This academic work has been institutionalized, with new journals, professional societies, and research centers. It is now making successful inroads into the worlds of public policy, commercial self-help, and HR management.

But has this latest wave of effort been a success?

The State of Wellbeing Research

The paper begins by discussing how we characterize the term “wellbeing” and then presents major achievements across research in philosophy, economics, and psychology. Wellbeing is a capacious umbrella term that gets filled in differently in different disciplines and even in different projects within the same discipline. Such vagueness and diversity is to be expected and no existing attempts to standardize its usage have so far succeeded. In any case, defining wellbeing requires making a value judgment about what is “good for” somebody, and variations in discipline or context can alter what counts as good. All this results in radically different operationalizations of wellbeing and arguably even in different concepts.

At the level of a nation, what measure would capture the quality of life of its people? That it should include more than the traditional economic indicators is slowly becoming the mainstream view. In 2009 three eminent economists Joseph Stiglitz, Amartya Sen, and Jean Paul Fitoussi, produced a report commissioned by French President Nicolas Sarkozi outlining a multidimensional measure of national wellbeing that includes subjective indicators (Stiglitz et al 2009). Since then, national and state governments have been busy developing their own indices of wellbeing.

There are many different ways in which researchers define wellbeing, and these differences enable them to produce theories and claims at different levels of analysis and from different perspectives. What does this say about measurability of wellbeing in general?

If we could summarize the state of the art with one sentence it would be as follows: wellbeing is measurable, but it depends on what you mean by measurement. We have already seen that the field as a whole does not operate with a single definition of wellbeing and this matters for measurability because some definitions are far more amenable than others. To measure a phenomenon is to assign numerical values that represent meaningful variations. Beyond this minimal definition, scholarly literature and scientific practice allow for different ways of assigning these values and justifying them.

Integration of Theories and Perspectives

The history of wellbeing research has been characterized by disagreements and ever more subtle differentiations. More recently, there has been a countervailing push to adopt more integrative attitudes to this field of study. Philosophers have always been somewhat aggrieved by psychologists’ reluctance to engage with the evaluative dimensions of well-being. Wellbeing, they argue, is what is “good for” somebody. This cannot be defined without making value judgments as to what the “good” is. But equally, no normative theory can possibly succeed without fitting human psychology and human sociality.

Ultimately, Alexandrova and Fabian conclude that decades of scholarly investment into the subject have borne many fruits, especially in ongoing research in clinical psychology, psychotherapy, and behavioral economics.

Read the full research review on the Science of Wellbeing by Anna Alexandrova and Mark Fabian.

Explore our other research reviews on topics such as:

Why Young People’s Mental Well-Being Is in Such Decline

What Have We Learned from Five Decades of Human Wellbeing Research?