The Origins of the Universe

The Origins of the Universe 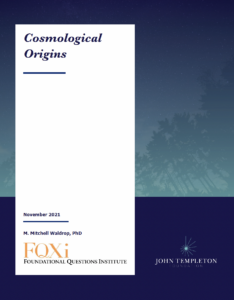 At some point in every child’s life, they look up in wonder at the sun, moon, stars, and planets and ask: What are they? Why do they move and change the way they do? Where do they all come from? And where do we come from?

The field of cosmological origins research is dedicated to the exploration of these questions. Over the past several centuries, the discipline has guided scientists to a cosmic story that is far stranger than our ancestors could have imagined — a journey that has required several radical shifts in perspective. In a new research review produced by the Foundational Questions Institute (FQXi), science writer Mitchell Waldrop recounts the history and advancement of the scientific understanding of cosmic origins. The report begins by outlining key developments in human understanding since the Enlightenment, and then goes on to describe five major areas of discovery from the 20th and 21st centuries. They are as follows:

The first key piece of evidence for the Big Bang was the realization that the galaxies in the universe are flying apart from one another, like sparks from some titanic explosion. We can trace this story back to Albert Einstein and his two theories of relativity. In the 1910s, observers deploying ever more powerful telescopes discovered that the stars that are bright enough to see with the naked eye comprised only a tiny fraction of our Milky Way galaxy, an immense flattened disk many tens of thousands of light years across. In the 1920s, astronomers found that even this huge structure is just a tiny mote on the cosmic scale. Then in the 1930s, astronomers realized that this already vast cosmos is getting bigger. The universe — in keeping with Einstein’s equations — is expanding.

Few astronomers in the 1930s were comfortable with a cosmic beginning. Attitudes began to change only in the 1940s, when a handful of scientists used the new field of nuclear physics to calculate how thermonuclear reactions would have unfolded during the first few minutes of the universe. Their findings supported the idea of a Big Bang, but this evidence was not yet enough to rule out an alternative model, the popular “steady-state” model of cosmology. But in 1964, radio astronomers discovered a bath of microwave radiation filling the sky—the Big Bang’s afterglow, comprising particles of light that were emitted some 380,000 years after the universe’s birth. This cosmic microwave background radiation not only made the Big Bang idea almost inescapable, but it has proved to be the richest source of information for astronomers studying the very early universe.

Before the Big Bang 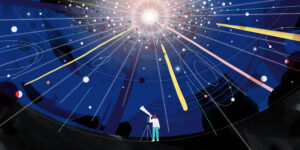 Exploring the origins of the universe. Illustration created by Jin Xia.

The theory of cosmic inflation suggests that the early universe underwent an incomprehensibly brief interval of rapid expansion that stretched cosmic spacetime as taut as a hyper-inflated balloon. Only after that period of “inflation” would a multi-billion-light-year patch of spacetime slow down and begin the comparatively tame expansion seen today. Cosmic inflation explains some otherwise hard-to-understand features of our present-day universe, such as the fact that it is big, old, and looks pretty much the same in every direction. But things became weird and controversial when physicists realized that, in theory, an inflating cosmos might easily produce a multitude of universes in addition to ours. Each would be a universe in its own right, perhaps with its own laws of physics; collectively, they would comprise a kind of cosmic foam known as the “multiverse” without any discernible beginning.

Most of our universe is invisible to us. One component of this invisible sector is a haze of “dark matter” that is about five times as massive as all the visible stars and galaxies put together. No one yet knows what dark matter is—but it has an overwhelming gravitational influence on the visible stars. A second, even more mysterious component of the invisible sector is “dark energy.” Discovered only in the 1990s, dark energy seems to be some kind of universal cosmic repulsion that is causing the expansion of our universe to accelerate.

The Age of the Universe

A crisis over the age of the universe has unfolded over the past decade. As our observations have become increasingly accurate, measurements of the cosmic expansion rates obtained from examining the cosmic microwave background radiation have consistently shown a small, but worrisome difference from the rates obtained by measurements of the most distant stars and galaxies. This has led to a billion-year discrepancy in our estimates of the time since the Big Bang. The question is whether this is the result of some calibration error, or if it is revealing something new and profound about our understanding of the origins of the universe.

Read more about the upcoming research reviews from the Foundational Questions Institute (FQXi).

The Origins of the Universe December 3, 2021

Why is the universe the way it is? Ancient societies over told creation stories to answer that question, which seems to be as old as human civilization itself. Cosmology seeks […]