The Science of Forgiveness, written by leading scholar Dr. Everett L. Worthington, reveals key insights about forgiveness and its potential to heal society and ourselves. 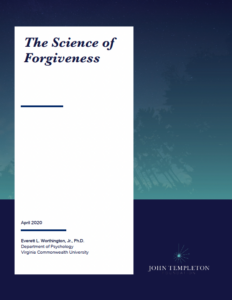 During the late 1990s, in the aftermath of the fall of Communism, Nelson Mandela’s election in South Africa, and an easing of the conflict in Northern Ireland, the world faced a new era in which former enemies tried to work with each other. Forgiveness took on new significance beyond religion, with which it had often been associated.

The John Templeton Foundation issued a call for proposals that resulted in a total of almost $10 million put toward research on forgiveness. Now, 15 years later, as we take stock of the benefits of forgiveness, we find that research within this fascinating field of scholarship has continued not just to grow, but to accelerate.

Sign up today for free access to the full PDF and other exciting resources from the John Templeton Foundation.

Don’t miss out on these fascinating insights. Sign up to receive the Science of Forgiveness today.