Was Emerson right about the healing power of awe?

In Stendhal’s 1839 masterpiece The Charterhouse of Parma, when the brave, impetuous hero Fabrizio del Dongo finds himself imprisoned alone at the top of the Farnese Tower in Northern Italy, he is surprised to find there not torment, but the first peace of his life.

Gazing down from a dizzying height onto the mountain landscape — a magnificent view of Alpine peaks and the River Po stretched beneath a setting sun — he entirely forgets his predicament. Instead of lamenting his arrest, he spends over two hours “admiring this horizon which spoke so intimately to his soul.”

Fabrizio’s problems diminish in the vastness of the landscape; his sense of self shrinks, and he feels intimately connected to other people — particularly the young woman who lives below and shares the same view.

As the Italian novelist Italo Calvino puts it, the perspective he gains allows the hero to see not only physical vastness, but also “his own life, and that of others, as well as the network of intricate relations which make up a human destiny.”

It is such an experience of the “small self,” and how it can relieve our daily struggles and concerns, that the researchers sought to investigate in the recent study, “Awe, Daily Stress, and Elevated Life Satisfaction.” 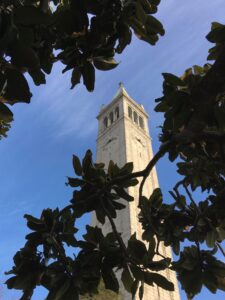 Instead of the fictional Farnese Tower, scientists used a building 5,900 miles away from the Alps — the 307-foot-tall Sather Tower that stands in the foothills of Berkeley, California and commands a panoramic view of San Francisco Bay.

There, on an observation deck two hundred of feet above the ground, and some five hundred feet above the bay, they invited subjects to look out at the view of tiled roofs, open sky, and the Golden Gate Bridge. A control group was asked to stare at a blank wall.

The results of this study, and five others described in their publication, give fascinating evidence in support of the idea that experiencing awe is associated with reduced daily stress.

“In the midst and aftermath of the experience of awe, daily personal concerns — small, ordinary events causing anxiety, distress, and pain — seem, at least phenomenologically, to diminish in their significance,” the authors write. “In the current investigation we sought to offer the first evidence for this hypothesis.”

Read more to learn more about their work, which aims explicitly to give empirical weight to an intuition described poetically by American Transcendentalist Ralph Waldo Emerson one hundred and eighty six years ago:

“In the woods, we return to reason and faith. There I feel that nothing can befall me in life,—no disgrace, no calamity (leaving me my eyes), which nature cannot repair. Standing on the bare ground, — my head bathed by the blithe air and uplifted into infinite space — all mean egotism vanishes.”

Learn more about the science of this complex and mysterious emotion in a 75-page research paper produced for the John Templeton Foundation.

Study of the Day