The Science of Awe

Recent research is casting new light on one of the most profound human experiences.

What can the science of awe teach us about this most mysterious and mystifying emotions? A majestic waterfall, the Taj Mahal, towering redwoods, the Grand Canyon, a tornado, Beethoven’s Symphony Number 9, Monet’s Water Lilies, a fractal, a spiritual experience, a performance by Prince, a child being born, a speech by Martin Luther King, Jr., the view of Earth from space — all different experiences that can induce deep feelings of awe.

Awe is a complex emotion that can be difficult to precisely define. Feelings of awe can be positive or negative — unlike most other emotions — and can arise from a wide range of stimuli. Awe experiences are what psychologists call self-transcendent: they shift our attention away from ourselves, make us feel like we are part of something greater than ourselves, change our perception of time, and even make us more generous toward others.

Although awe has been explored and debated by philosophers, poets, and religious scholars for thousands of years, it was largely ignored by psychologists until the early 2000s. Since then, there has been growing interest in exploring awe empirically. This has led to a number of fascinating discoveries about the nature of awe. The John Templeton Foundation recently commissioned a white paper reviewing more than 75 studies related to awe to gain a perspective on the past, present, and future of awe-focused science.

What is the science of awe?

In a landmark 2003 paper, psychologists Dacher Keltner and Jonathan Haidt presented a “conceptual approach to awe.” In this paper, Keltner and Haidt suggested that awe experiences can be characterized by two phenomena: “perceived vastness” and a “need for accommodation.” Keltner and Haidt note that there are many varieties of awe — they suggest reactions to threat, beauty, ability, virtue, and supernatural causality as useful sub-categories — but all forms of awe seem to involve those two basic elements.

“Perceived vastness” can come from observing something literally physically large — the Grand Canyon, for example — or through an encounter with something or someone that is vast or profound, such as being in the presence of someone with immense prestige or being presented with a complex idea like the theory of relativity.

An experience evokes a “need for accommodation” when it violates our normal understanding of the world. When a stimulus violates expectations in this way, it can provoke a modification of the mental constructs that we use to understand the world. This need for cognitive realignment is an essential part of the awe experience as articulated by Keltner and Haidt.

Since Keltner and Haidt’s 2003 paper, studies have shown that awe is often accompanied by feelings of self-diminishment and increased connectedness with other people. Experiencing awe often puts people in a self-transcendent state where they focus less on themselves and feel more a part of a larger whole. In this way, awe can be considered an altered state of consciousness, akin to a flow state, in addition to an emotional state.

Keltner and Haidt suggest that awe might have evolved because it prompted reverence and devotion to powerful leaders and promoted social cohesion, later being co-opted by cultures to characterize other types of experiences. Alternatively, psychologists Alice Chirico and David Yaden suggest it may have evolved because it helped us identify safe places to seek shelter, such as environments with large vistas that would have allowed our hunter-gatherer relatives to see approaching predators or attackers. For instance, one study found that modern children show a preference for elevated positions with sweeping scenery that induce awe.

Awe’s ability to elicit cognitive accommodation may also explain why humans evolved to experience this unique emotion. Experiencing awe may be adaptive because it encourages us to take in new information and adjust our mental structures around it, helping us navigate our world and increasing our odds of survival. One study found that inspiring awe made subjects more skeptical of weak arguments. Finally, awe’s ability to make us feel more connected with others and to be more helpful and generous may have helped ensure our ancestors’ survival and reproductive success.

What types of experiences elicit awe?

As the opening paragraph of this article makes clear, it’s relatively easy to list the sorts of experiences that might cause awe. It’s more of a challenge for researchers to readily elicit awe (and to find a non-awe-inspiring control experience) in a lab or university setting. Scientists either must find awe-inspiring objects close at hand (one study had participants look at a full-size Tyrannosaurus rex skeleton; another elicited awe by having subjects stand in a grove of eucalyptus trees), or use memory prompts, slideshows of natural imagery, or even virtual reality simulations to consistently recreate awe-inspiring moments. Because overwhelming awe is a near-universal experience for astronauts, researchers have created immersive full-scale simulations of space travel, from takeoff to landing to see if they can spur similar feelings for subjects.

There are likely cultural variations in the awe experience. For example, one study found that personal accomplishments were more frequent elicitors of awe among subjects in the United States (a more individualistic culture) than among subjects from China (a more collectivist culture), whereas feeling awe directed toward another person was more commonly reported by those from China than by those from the United States.

Other studies suggest that wiser people may also experience more awe — one possible explanation for this finding is that those who are wise are more tolerant of ambiguity and uncertainty, and thus may be better able to adapt to the need-for-accommodation component of the awe experience. A person’s tendency to experience awe is also correlated with a number of other positive character traits, such as appreciation of beauty, creativity, and gratitude.

There are likely social factors that influence whether a person has a greater disposition to experience awe. For example, one study found evidence that people from lower social classes report experiencing awe (as well as compassion and love) more frequently than people from higher classes. Another study comparing awe experiences among people from the United States, Malaysia, Iran, and Poland found that those from the United States had the highest dispositional awe, whereas those from Iran had the lowest. 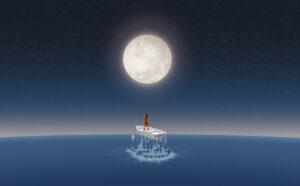 The Science of Awe: Effects

Awe experiences may bring with them a host of physiological, psychological, and social effects. For example, studies have found that feelings of awe can be accompanied by heart rate changes, goosebumps, and the sensation of chills, and there is some evidence that awe may even decrease markers of chronic inflammation.

When it comes to psychological effects, studies have found that awe can create a diminished sense of self (an effect known as “the small self”). Some studies have shown, for instance, that people draw physically smaller representations of themselves after being prompted to experience awe, as compared to a control group. When asked to choose which of a set of differently sized circles best represented themselves, tourists at Yosemite tended to choose smaller circles than otherwise similar tourists at San Francisco’s Fisherman’s Wharf.

Awe also seems to change our perception of time, with research showing that those who experience awe agreed more strongly with statements suggesting that time is plentiful than did people induced to feel happiness.

Awe also seems to boost feelings of connectedness (subjects were more likely to identify with universal human categories after contemplating the T. Rex), increase critical thinking and skepticism, increase positive mood, and decrease materialism. Viewing awe-inducing images reduced the effort people were willing to put into getting money (where effort was measured by tolerance for listening to the unpleasant sound of nails scratching). And undergraduates induced to feel awe reported feeling less negative emotion when asked to imagine losing a possession than students assigned to a neutral condition.

Multiple studies have also found evidence that experiencing awe makes us more kind and generous. Those who wrote about a time when they experienced awe reported a greater willingness to volunteer their time to help a charity than did people who merely recalled a happy experience. Another study found that subjects with more dispositional awe were more generous in laboratory tasks — such as in how they distributed raffle tickets between themselves and an unknown participant — and that those who stood among awe-inspiring eucalyptus trees picked up more pens for an experimenter who had “accidentally” dropped them than did those who stared up at a not-so-inspiring large building.

Research from a few experimental studies suggests that awe may increase spiritual and religious feelings. In one study, undergraduate students who watched awe-inspiring videos — for example, a video of childbirth or a nature video — reported being more religious (as measured by the extent to which they agreed with statements like “Religion is important in my life” and “Without God the world would not have a meaning”) than people did after watching a neutral video of a person manufacturing beer. In another study, researchers found that participants’ level of religiosity was positively related to their reported willingness to visit Tibet (a spiritual destination), but only after they had recalled a memory involving awe (recalling a neutral event had no effect).

Little is known about the neurological mechanisms that underlie the awe experience. One small study found differences in two types of brain waves — theta and beta — between people who did and did not experience awe while in simulated space flight. Functional magnetic resonance imaging will likely be another fertile way to look at how awe affects different parts of the brain.

Since awe sometimes plays a role in profound psychological transformations, one area of ongoing investigation will be awe’s present and potential role in psychotherapy, as an avenue both for incremental desirable improvements as well as potential personal breakthroughs. Another might be an investigation of the ways that awe can lead to antisocial behavior — by, for example, inspiring religious fanaticism or leading people to follow a charismatic demagogue.

The modern science of awe is barely 15 years old, and there are many more questions left to be explored than those that have been answered. Particularly interesting areas for future study include: How do children experience awe? How do our different senses contribute to the awe experience? How do natural awe experiences vary from those in the lab? And can people be taught to experience awe more frequently?

Download the research summary on the science of awe here.

Was Emerson right about the healing power of awe?  In our Study of the Day feature series, we highlight a research publication related to a John Templeton Foundation-supported project, connecting […]

How Awe Transforms Us From the Outside In Was there ever a time when humans didn’t pause to admire a flaming sunset or the Milky Way on a clear night? […]

Mystical experiences have given the scientist a sense of purpose, both human and divine  Jane Goodall lay on her back in Gombe National Park, Tanzania, bathed in the light of […]

WATCH: Dr. Francis Collins on the Discovery That Filled Him With Awe

Join us in conversation with Dr. Francis Collins, the 2020 Templeton Prize laureate and director of the National Institutes of Health. He recently sat down with Heather Templeton Dill, President […]