Mystical experiences have given the scientist a sense of purpose, both human and divine

Jane Goodall lay on her back in Gombe National Park, Tanzania, bathed in the light of the stars. It was the spring of 1981. Goodall had worked in Gombe’s forests for over two decades studying chimpanzee behavior. A scientist through and through, she nonetheless found herself stunned at the immensity and beauty of the universe, which stretched beyond human understanding. Rather than becoming frustrated by the limits of scientific inquiry, Goodall rested in wonder. “How sad it would be,” she thought to herself, “if we humans ultimately were to lose all sense of mystery, all sense of awe.”

It is for this interweaving of scientific and spiritual curiosity that Goodall received the 2021 Templeton Prize. Since 1960, the conservationist and primatologist has studied chimpanzees in Tanzania and shown the world their kinship to human beings. She introduced the public to chimpanzees’ ability to create tools, their individual personalities, and their formation of communities. The 2021 Templeton Prize recognizes her unrelenting effort to advocate for the care and preservation of our more-than-human world.

Much of Goodall’s work has focused on protecting wildlife and habitats from destruction. Yet even as environmental degradation continues around the globe, she sustains deep—and sometimes improbable—hope for a better future. This hope is grounded in her awe at the interconnectedness of all life, and her belief that a divine power sustains this life. Two mystical experiences in particular helped shape her spirituality. Goodall details these in her bestselling memoir, Reason for Hope: A Spiritual Journey.

Finding God in the cathedral 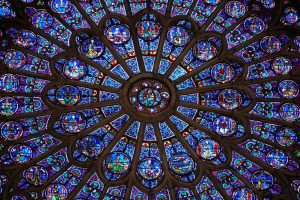 In 1974, Goodall traveled to Paris for a conference. Sitting in the stillness of the Notre Dame cathedral, she gazed at the light filtering through the intricate stained glass. Suddenly, the space filled with music. An organ played Bach’s Toccata and Fugue in D Minor, the music overtaking the cathedral and her body. For several minutes, beauty overwhelmed her. That moment, Goodall recalls, “…was perhaps the closest I have ever come to experiencing ecstasy, the ecstasy of the mystic.”

This experience of intense awe revived Goodall’s interest in questions about the meaning of life. Raised in a Christian family, she had since given herself wholly to empirical thinking. But in Notre Dame she ceased to think that science and spirituality were at odds. The awe she felt in the cathedral caused her to believe, as Pierre Teilhard de Chardin put it, “There is something afoot in the universe, something that looks like gestation and birth.”

Later she would call the music the voice of God “in a form suitable for human ears.” At the time, though, she wasn’t sure what had happened. She only knew that she had been lifted out of herself for a brief moment and returned to her long-held questions about the divine. She could only describe the experience as one of ecstasy, a word that comes from the Greek ekstasis, meaning “to be or stand outside oneself.”

Notre Dame marked the beginning of her return to a belief in God, which she calls “the Great Spirit in Whom ‘we live and move and have our being.’” Through periods of doubt and despair Goodall has maintained trust in a divine plan. She sees purpose behind the emergence of life on this planet. This belief, in turn, has given her own work purpose. It galvanizes her to protect and conserve life—even in the face of extinctions, a changing climate, and environmental destruction.

Finding awe in the forest 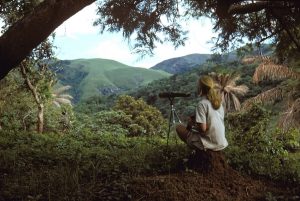 Courtesy of the Jane Goodall Institute

The second mystical experience was to follow years later, this time in the cathedral of Gombe’s forests. Following the death of her husband Derek Bryceson, Goodall sought healing among the trees. One morning she set out before dawn into the forest. She followed a family of chimps as they went about their day, traveling higher up a mountainside. An abrupt storm forced them to take shelter beneath the trees until it passed. Once the rains abated, she and the chimps made their way home together. Soon they arrived at a grassy ridge. A lake spread before them and the sun broke through the clouds, setting the damp world sparkling. Once again, beauty and a sense of wholeness overtook Goodall in body and mind. She stood there for a long time, lifted out of herself.

As the mystics did, Goodall found it difficult to put words to the scene’s sacred nature. “It seemed to me, as I struggled afterward to recall the experience, that self was utterly absent: I and the chimpanzees, the earth and trees and air, seemed to merge, to become one with the spirit power of life itself.”

A paper on the science of awe, prepared for the John Templeton Foundation by the Greater Good Science Center at UC Berkeley, details the transformative effects of awe. Researchers call what Goodall experienced “the small self effect,” a diminished sense of self-importance when confronted with the world’s vastness. They found that intense awe experiences like Goodall’s can transform the way people function in the world. As psychologist David Elkins writes, “Awe is a lightning bolt that marks in memory those moments when the doors of perception are cleansed and we see with startling clarity what is truly important in life.”

This was the case for Goodall. Her experiences of intense awe, both in the cathedral and the forest, flooded her with wonder and imbued her with an unshakeable sense of a divine power at work in the world. These encounters became a source of strength, she writes, “on which I could draw when life seemed harsh or cruel or desperate.”

Following the rainstorm in Gombe, she experienced a sense of heightened attention: “Never have I been so intensely aware of the shape, the color of the individual leaves, the varied patterns of the veins that made each one unique,” she wrote. As philosopher and mystic Simone Weil put it, “Absolute unmixed attention is prayer.” This kind of attention is another hallmark of Goodall’s spirituality. It has allowed her to apprehend the soul in every living thing.

Late in her life, she continues to draw on these mystical encounters, knowing that science alone cannot tell us everything about existence. Goodall’s rigorous scientific inquiry is paired with a sense of divine goodness and purpose, which allows her to persist in spite of a changing and threatened planet. Her work in the forest and among the chimpanzees convinced her that all species carry a spark of divine power, and that each of us—humans, chimps, trees—relies on the other in the delicate ecosystem of life. If every living thing carries this spark, then humans should do all that is in our power to protect and conserve fellow inhabitants of earth. This is the message Goodall carries with her from the forest to the far-flung corners of the earth through her teaching. When speaking, she reminds her audience: “Each of us matters, has a role to play, and makes a difference.”