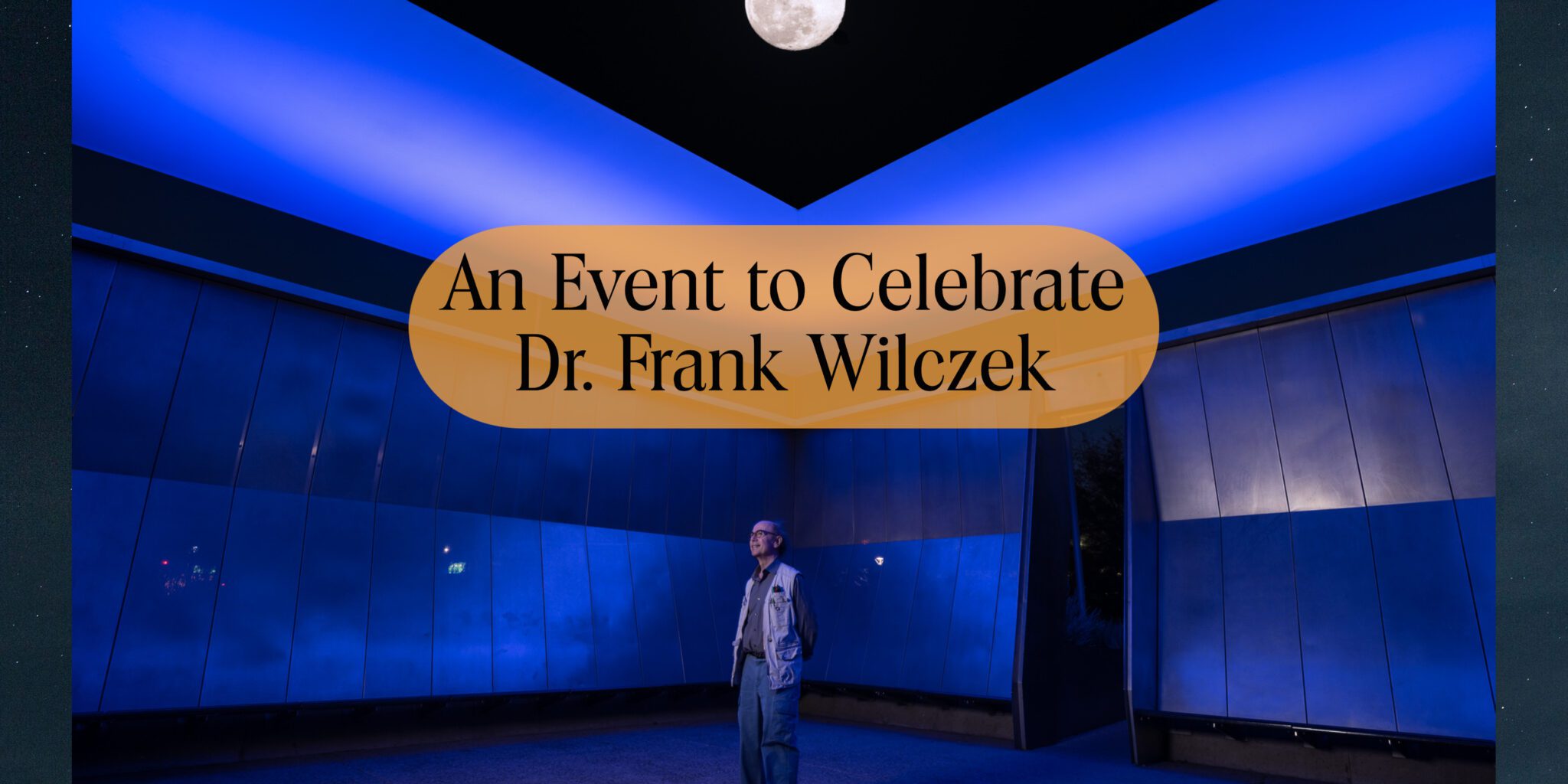 On Wednesday, November 2nd the Templeton Prize will host a special event at The Times Center in New York City to honor 2022 Templeton Prize laureate Dr. Frank Wilczek. A Nobel Prize-winning theoretical physicist and author, Dr. Wilczek received the Templeton Prize for his discoveries that have transformed our understanding of the forces that govern the universe. In a statement earlier this year announcing the 2022 Prize recipient, John Templeton Foundation president Heather Templeton Dill said of Dr. Wilczek’s achievements, “Throughout Dr. Wilczek’s philosophical reflections, there is a spiritual quality to his ideas. By uncovering a remarkable order in the natural world, Dr. Wilczek has come to appreciate different ways of thinking about reality, and through his written work, he has invited all of us to join him in the quest for understanding. When we come face to face with the beauty that Dr. Wilczek describes, we can’t help but wonder about humankind’s place and purpose in the universe.”

The upcoming event at The Times Center in New York, New York will include remarks by Heather Templeton Dill, a lecture given by Dr. Wilczek, and a conversation with author and journalist Derek Thompson of the Atlantic, followed by a Q&A with the audience.

The Templeton Prize is one of the largest individual prizes in the world ($1.3M+). Since its founding in 1972, the Prize has been given to some of the most influential people of our time including Archbishop Desmond Tutu (2013), the Dalai Lama (2012) and Mother Teresa, who was awarded the inaugural Prize in 1973. The 2021 Templeton Prize was awarded to ethologist and conservationist, Dr. Jane Goodall.

Dr. Wilczek, 71, will deliver remarks at the Times Center to an audience that will include scientists, journalists, and leaders of philanthropy. The program will also feature a brief film about his life and values, “How Beauty Leads to Truth in Physics.”

About the Templeton Prize

Established in 1972, the Templeton Prize is one of the world’s largest annual individual awards. It is given to honor individuals whose exemplary achievements advance Sir John Templeton’s philanthropic vision: harnessing the power of the sciences to explore the deepest questions of the universe and humankind’s place and purpose within it. Currently valued at 1.1 million British pounds, the award is adjusted periodically so it always exceeds the value of the Nobel Prize. Winners have come from all faiths and geographies, and have included Nobel Prize winners, philosophers, theoretical physicists, and one canonized saint. The Templeton Prize is awarded by the three Templeton philanthropies: the John Templeton Foundation, based in West Conshohocken, Pennsylvania, and by the Templeton World Charity Foundation and Templeton Religion Trust, based in Nassau, The Bahamas. To learn more, visit TempletonPrize.org

Dr. Frank Wilczek is a Nobel Prize-winning theoretical physicist and author whose boundary-pushing investigations into the fundamental laws of nature have transformed our understanding of the forces that govern our universe. In May 2022, Dr. Wilczek was announced as the winner of the 2022 Templeton Prize.

The Templeton Prize, valued at more than $1.3 million, is one of the world’s largest annual individual awards. Established by the late global investor and philanthropist Sir John Templeton, it is given to honor those who harness the power of the sciences to explore the deepest questions of the universe and humankind’s place and purpose within it. Dr. Wilczek is the sixth Nobel laureate to receive the Templeton Prize since its inception in 1972.

Dr. Wilczek’s achievements in physics, which include establishing the theoretical description of one of the four fundamental forces in nature and proposing a leading explanation for dark matter, put him in the first rank of scientists. Moreover, as a public intellectual, his lectures and writings have illuminated the philosophical implications of his ideas. Across his work, he reveals a vision of a universe that embodies mathematical beauty from the magnificently large to the unimaginably small: a universe inherently beautiful in all its parts.

The Herman Feshbach Professor of Physics at the Massachusetts Institute of Technology, Dr. Wilczek won the Nobel Prize in 2004 for his early-career work establishing the fundamental theory of the strong nuclear force. Since then, he has continued to pioneer new concepts in physics, naming and developing the theories of anyons, time crystals, and axions, each of which now defines major fields of inquiry. Throughout his career, Dr. Wilczek has used his exceptionally fertile scientific imagination to unveil previously hidden realities.

Dr. Wilczek has also engaged with a wide audience as a writer and speaker. He has written several popular books, including A Beautiful Question (2015) and The Lightness of Being (2008). In his most recent book, Fundamentals (2021), Dr. Wilczek presents a set of ten distilled insights drawn from physics and harmonized with artistic and philosophical sources to illuminate characteristics of physical reality. A columnist for the Wall Street Journal, he reflects on scientific subjects for a broad readership. His witty, enlightening authorial style puts him in the company of other great physicist-writers such as Nobel winner Richard Feynman and 2000 Templeton Prize laureate Freeman Dyson.

Dr. Wilczek received a B.S. at the University of Chicago in 1970, and a Ph.D. in physics at Princeton University in 1974. Currently he is the Herman Feshbach professor of physics at the MIT; Founding Director of the T. D. Lee Institute and Chief Scientist at Wilczek Quantum Center, Shanghai Jiao Tong University; Distinguished Professor at Arizona State University; and Professor at Stockholm University.

He has been married to the journalist and author Betsy Devine since 1973. They have two daughters, Amity and Mira.

Derek Thompson is a staff writer at The Atlantic, where he publishes the newsletter “Work in Progress” on science, tech, and culture. He is the founder and host of the news podcast “Plain English with Derek Thompson” with the Ringer Podcast Network. He was previously the host of the podcast “Crazy/Genius,” which won the 2020 Publisher Podcast Award for best podcast of the year. A news analyst with NPR, Derek appears weekly on the national news show “Here and Now” and is also a contributor to CBS News. His first book, the national bestseller Hit Makers: How to Succeed in an Age of Distraction, has been translated into more than a dozen languages and was named the 2018 Book of the Year by the American Marketing Association. He is currently working on his second book, co-authored with Ezra Klein, on how to overcome a scarcity mindset and create a world of abundance. Derek lives in Washington, D.C., with his wife.

Heather Templeton Dill is president of the John Templeton Foundation. Prior to assuming this role in 2015, she served as executive liaison to the president under her father, the late Dr. Jack Templeton. Dill is the granddaughter of the late Sir John Templeton.

In her tenure as president, Dill and the Foundation have awarded 1,334 grants and donations totaling more than $874 million. The John Templeton Foundation funds research and discovery across a range of subjects in the sciences, philosophy and theology from gratitude and hope to the psychology of purpose and positive neuroscience.

One of the main programs of the Foundation is the Templeton Prize, valued at $1.3 million. It is one of the world’s largest annual individual awards to honor individuals whose exemplary achievements advance her grandfather’s philanthropic vision: harnessing the power of the sciences to explore the deepest questions of the universe and humankind’s place and purpose within it.

The 2022 Templeton Prize Laureate, Dr. Frank Wilczek joins a list of 51 Prize recipients including St. Teresa of Kolkata (the inaugural award in 1973), the Dalai Lama (2012), and Archbishop Desmond Tutu (2013). The 2021 Templeton Prize went to ethologist and conservationist Dr. Jane Goodall. Preceding her was Dr. Francis Collins, former Director of the National Institutes of Health and leader of the Human Genome Project, for his demonstration of how religious faith can motivate and inspire rigorous scientific research. Other physicists who have won the Prize include Marcelo Gleiser (2019), Martin Rees (2011), John Barrow (2006), Charles H. Townes (2005), George Ellis (2004), Freeman Dyson (2000), and Paul Davies (1995).

Dill has spoken at various venues on living in a pluralistic world, on the research-supported benefits of a life of purpose, as well as the importance of intellectual humility. In 2020, she received the Citizen Diplomat of the Year Award, from Citizen Diplomacy International Philadelphia, jointly with Jennifer Templeton Simpson, and she was selected by Main Line Today magazine for its 2019 Women on the Move issue.

She served as a trustee of the John Templeton Foundation from 1997-2003 and 2009-2015 and has been a member of the Foundation’s executive, finance, and strategic planning committees. Dill previously served on the Templeton Religion Trust steering committee and the Templeton World Charity Foundation board and is currently a member of the board of First Trust Bank Limited. She holds a master’s degree in American history from Villanova University and is a graduate of the University of Notre Dame with a B.A. in history and a concentration in public policy.

‘God is Under Construction’ | The Playful Spirit of Dr. Frank Wilczek

The Universe According to Frank Wilczek