Social Hostility Towards Religion Declined in 2019, According to Recent Research

A Decline in Terrorism Led the Reduction, while Government Hostility Remained Steady

Violence and harassment against religious groups by private individuals declined in 2019, according to the Pew Research Center’s 12th annual survey of global restrictions on religion. Although international headlines of the year included several acts of extreme religious violence — including a series of Easter attacks on Sri Lankan churches left 250 dead and a shooting that killed killed 51 Muslim worshippers at Friday prayers in Christchurch, New Zealand — the total number of such events was lower. 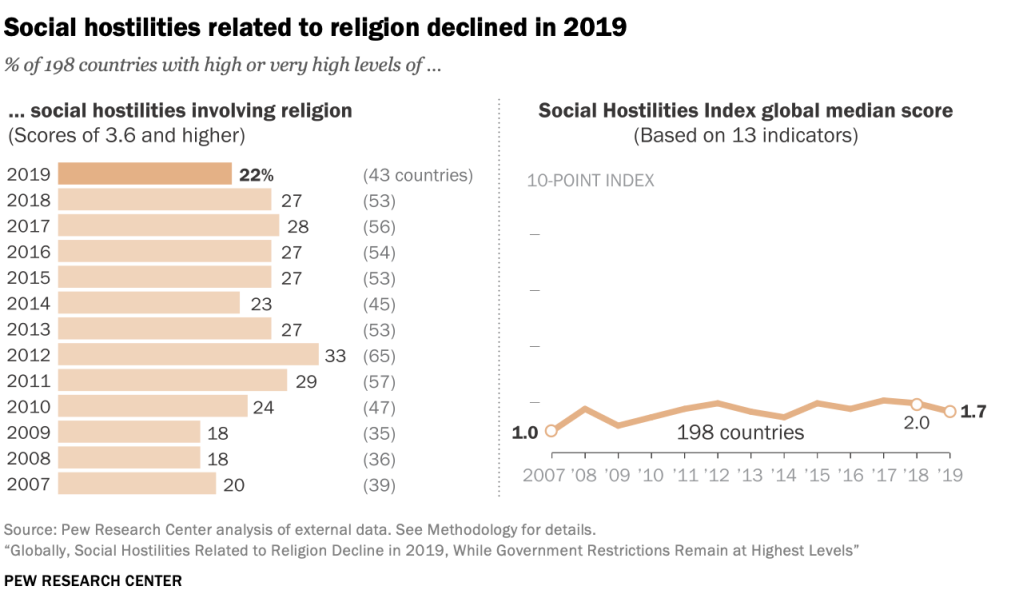 Samirah Majumdar, a research associate at Pew who was the lead author of the report, says that one of the key takeaways of the report is the reduction in social hostility, even while government religious restrictions has remained fairly stable. “The lack of year-to-year fluctuations in government restrictions is perhaps not surprising, since government restrictions include laws and policies, along with government actions, which don’t oscillate as much from one year to another,” Majumdar says. Social hostilities can vary much more year to year, but Pew’s multiyear data shows a meaningful decline over the past five years, particularly in religion-related terrorism.

HOW HOSTILITIES WERE TRACKED

This report was produced by Pew Research Center as part of the Pew-Templeton Global Religious Futures project. For the survey, researches coded data from a dozen published cross-national sources, including country constitutions, U.N. and governmental agencies, organizations like Human Rights Watch and Amnesty International, and academic research centers like the University of Maryland’s START Global Terrorism Database.

The overall decrease in social hostilities documented in the report includes reductions in the number of countries reporting mob violence related to religion (from 41 in 2018 to 34 in 2019), hostilities over proselytizing (from 35 to 28) and individuals using violence or threats to enforce religious norms (from 85 to 74).

The two religions whose members experienced harassment in the largest number of countries were also the most numerous: Christians (153 countries) and Muslims (147 countries — including every country in the Middle East and North Africa region). Despite comprising only 0.2% of the world’s population, Jewish people were the third-most-pervasively harassed group in the survey.

LOOKING FORWARD — TO THE PRESENT

It remains to be seen whether the trends in the 2019 report will continue. One of the largest looming questions is whether the global disruptions caused COVID-19 will change the trends Pew has observed.  “For the next report, which will cover religious restrictions in 2020, we are interested in seeing how the COVID-19 pandemic has affected religious restrictions,” Majumdar says. Among other things, the pandemic has disrupted the global flow of data, including many of the sources Pew relies on to create its indices.

Read the full report and explore Pew’s data visualization essay and interactive report on the 25 most populous countries surveyed.