Rev. Dr. Carmelo Santos on what neuroscience and Christian theology can teach each other 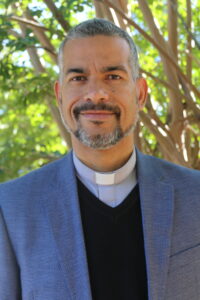 For over three decades, the Philadelphia-based nonprofit Esperanza has worked to strengthen and empower Hispanic communities. The organization recently launched a two-year pilot project called Ciencia, Fe y Esperanza (Science Faith and Hope) to help communities of faith explore the interplay between their religious beliefs and modern scientific principles.

To help lead this initiative, Esperanza engaged theologians, scientists, pastors, and educators. Among them is Rev. Dr. Carmelo Santos, a chemist-turned-theologian. For years Dr. Santos taught a course at Georgetown University called “God and the Brain,” and now serves on the theological staff of the office of the presiding bishop of the Evangelical Lutheran Church in America (ELCA). His bilingual devotional book Did God Create the Universe? is written for kids with big questions, with the goal of helping children understand the compatibility between faith and science.

As a theologian who engages in dialogue with neuroscience and cognitive science, he is fundamentally interested in the question of how concrete religious practices shape our brains, and how they can facilitate the decolonization of colonized people’s imaginations. We spoke to Dr. Santos about the ways religious practices shape the brain, how neuroscience can reveal our spiritual biases, and viewing science as a trust from God to humans.

John Templeton Foundation: You trained as a chemist, but eventually went to seminary and became a theologian. How did you first become interested in the relationship between science and faith?

Dr. Santos: I can think of two things. One has to do with the testimony of people in the church where I grew up. There were several people who were physicians, and the way that they talked about the work that they did from the perspective of faith — as part of God’s work — and the way that they talked about science as a way to see how God is at work in the world was very influential for me.

I went to study chemistry, and organic chemistry specifically. I noticed that while my classmates in the lab were spending time figuring out reactions and writing down equations, I was contemplating the reaction itself and thinking, Wow, right now I can see God’s Spirit at work creating something new right in front of me. I could also see chemistry analogies for the Trinity, which is [part of] my particular tradition. Eventually I thought, Maybe I should study theology. I love chemistry and I still do, but I thought that chemistry would not give me the tools to explore those questions that I had.

When you talk to people of faith within the Hispanic community, what’s most important for you to communicate about the confluence of faith and science?

I want to begin with a common ground of understanding, trying to understand why there is resistance, and then I want to help people see science as a gift of God. I go all the way back to the book of Genesis and the story of creation, when God commissions Adam with naming the other creatures. I read this not as an act of random power but as an invitation to investigate: what is their name, what is their nature, what are they about? I see science as a gift and as a trust that we have received from God, and I want to convey that to the community. I also want them to understand how science provides us with a lens that allows us to see tremendous beauty in creation. Because I study science, I am able to look outside my window and look at the trees and understand how, from light and from carbon dioxide, they can create matter.

Finally, [I want them] to understand that in this modern world that we live in, science has a lot of power to define what it means to be human, to define what is right and what is wrong. If we as a Latinx community, and other communities too — Black, brown, indigenous, Asian — if we’re not willing to be part of that conversation, then we are allowing others to to name us. We’re allowing others to offer answers to those questions that will not take into consideration our perspective.

How do embodied religious practices shape our brains and nervous systems?

I think that we emphasize ideas and thinking, and then [believe] our actions or behaviors will follow. What’s fascinating is that research in cognitive science and psychology and neuroscience seems to point out that, more often than we are comfortable admitting, it’s the other way around. Our behaviors and our actions shape our thoughts and our beliefs. One particular example is the idea from cognitive science of cognitive dissonance: the idea that if I engage in behaviors that contradict my beliefs, and if I do that for long enough, there’s going to be so much tension built up in me that either I’m going to have to adjust my behaviors to align with my beliefs, or I have to adjust my beliefs to align with my behaviors. And the research seems to indicate that almost always the behavior wins.

So there is a reciprocity between how we act and what we think. We need to pay particular attention then to the rituals, to the worship, to spatial arrangements, to embodiment, and to understand that particularly for our children growing up in these spaces, that is going to have a greater impact than [ideas] we’re trying to teach them.

For Esperanza’s Ciencia, Fe y Esperanza initiative, you wrote a guide on studying the Bible from a neuroscience perspective. How does knowledge of the brain provide us with a lens to read scripture in fresh ways?

One of the reformers of the church, John Calvin, said that the heart is a factory of idols. We have the tendency to invent these images that are really reflections of ourselves, and we call that God. I think that understanding better how the mind works and how the brain works when it comes to thinking about God helps me filter out those things that I know I have a tendency of creating. Then I can stop and say: Wait a minute, is this really God that I’m talking about? Or is this my cognitive system projecting onto this image of God, that will then allow me to behave in some ways that I’d rather behave in, rather than having to be accountable to God?

On the other side of the coin, what insights can Christian theology bring to scientific study?

One of the entry points is the question of what it means to be human. There are several lines of thinking in Christian theology and in the Bible but one of them emphasizes the body, and that the human person is a unity of body, spirit, soul, and mind. Our bodies are important to us, and that includes our brains. We don’t relate to God despite our bodies, but we relate to God through our bodies. When science began to look into the brain as the locus of the human mind, it became a really natural dialogue partner for this particular type of theology. The definition of what it means to be a human being has implications that go beyond the curiosity of science—it has to do with ethics, it has to do with what the good life is for a human person. That is one of the things that Christian theology in particular can contribute to the conversation with science.

The Christian faith has been abused in many different ways. It has been distorted tremendously, unfortunately, and many people have suffered. In the last 200 years or so there has been a movement for looking critically at the scripture and theology. Particular communities in Latin America, [as well as] Black theology, have developed what is called a hermeneutics of suspicion. This too is one of the contributions that theology has to offer science. Sometimes the way science is done can be quite naive in terms of not understanding the role that social location plays in the way that a scientist decides what questions to ask. For example: What race is being examined? Is there such a thing as a generic human being? Or are we investigating mostly white human beings and then extrapolating that to others? In those types of questions, this particular kind of theology — Liberation Theology — can really make a contribution to science.