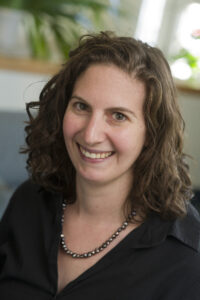 Kathleen Corriveau is an Associate Professor in Human Development at Boston University School of Education where she directs the Social Learning Laboratory. Her research focuses on social and cognitive development in childhood, with a specific focus on how children decide what people and what information are trustworthy sources.

Corriveau’s work has been supported by several grants from the John Templeton Foundation. She is the co-project leader with Rebekah Richert for the Foundation’s second-largest grant ever made, a $9.9 million global project to investigate how children form beliefs about supernatural beings. Called the “Developing Belief Network,” the project will use a set of shared survey questions and techniques to explore the emergence of beliefs among children across five continents and 17 countries, including Indonesia, Uganda, Bolivia, Lebanon, Israel, and India. She was also the project leader of a $1 million grant, “The role of religious exposure in children’s conceptualization of the invisible and the impossible,” from July 2016 to June 2019.

This interview with Kathleen Corriveau was conducted and edited by Benjamin Carlson, Director of Strategic Communication for the John Templeton Foundation.

How did you first get interested in your field?

I became interested in developmental science in part because I’ve always been interested in kids. When I was younger I didn’t necessarily know that this could be a career – to study how kids acquire information about the world.

It wasn’t until spring semester my senior year at Brown University when I took a class with Dave Sobel that helped inspire a strong interest in development. After I graduated, I became interested in how I could pair my love of neuroscience with child development and education. At the time, the only program that focused on the intersection of neuroscience and education was at Harvard Graduate School of Education. There I started to work with Paul Harris, who became my advisor, and I still collaborate with him now.

What are some big questions that drive your work?

The biggest question is: How do kids learn about the world? How do they acquire knowledge, and then, when they’ve acquired something, how do they decide whether or not it’s true?

What would you like people to know about your research in transmission of beliefs?

Researching belief transmission in the domains of science and religion has allowed for exploration of a lot of fundamental questions in developmental science. One is this interest in questions about how beliefs are transmitted. Another is how children are attending and weighting information from others versus their own firsthand observation and visible experience. For me, it’s allowed for the exploration of these fundamental questions in the field that are relatively understudied.

How do you study these religious narratives and beliefs?

We’ve used a variety of methods. We have given extensive questionnaires to parents in the US, China, and Iran. We probe kids about their ontological judgments by asking, “Do you believe in this unobservable scientific or religious entity, and how confident are you?” If the child says he is very confident that this is real, then we ask why is that? What we’re calling “elaborating” is when they give additional details about the entity. For example, they might say, “Germs are real because they make you sick.” Or “God is real because he loves me.” These are not mutually exclusive ways of justifying claims – you can make reference both to the source, focusing on how you learned the information, and to the elaboration. For example, “My mom told me that God is real because he loves me.” We also look at belief transmission in parent-child conversations about some of these entities. We find that there are specific linguistic markers that parents are using that help to convey whether or not parents believe in the existence of particular entities.

What are you seeing in your research thus far?

One thing that we have found is that when kids make ontological judgments, they attend to violations of causality that are embedded within a story. For example, if they hear about someone who has a ship that flies through the air, they might view that person as pretend. By five, kids are explicitly highlighting those causal violations to justify why they are classifying them as pretend.

In our work exploring parent-child conversations, we are also seeing that kids also attend to the quality of testimony that they are receiving from their parents. For example, they attend to modulations of assertion such as ‘I think’ or ‘I believe.’ When you’re talking about something that is real, but you can’t see it, you never see these modulations of assertions. You never say, “I believe in germs.” But when a parent is talking about something where there is a variety of beliefs, you do see these modulations – such as saying, “I believe in God.” This might indicate that there’s a possibility that God doesn’t exist. In communities such as in Iran and China, the general public talks about God the same way they talk about germs, and children’s ontological judgments about unobservable scientific and religious entities look similar. However, in communities where there is more variation in belief such as in the US, children’s judgments are influenced by the way that their parents talk about the entities.

What differences are you finding among the different countries you’re studying?

We collected data from families in the US, Iran, and China. We chose these countries because they allowed us to explore the role of community consensus in belief transmission. In China and Iran, we anticipated that there would be strong consistency in public communication about religion, albeit in different ways with different conclusions. In the US, we expected to see more variability.

We are finding some consistency in beliefs, and some variability both across and within cultures.

For example, in one study, we asked about the existence of unobservable entities like God and heaven, as well as scientific entities like germs. In all three cultures, for scientific entities, children justified their belief, by elaborating on their knowledge of the entity. But children varied in the way they justified their beliefs in religious entities cross-culturally. In the US and Iran, they talk about them in very similar ways to the way they talk about scientific entities, by elaborating on their knowledge. But in China, children are much more likely to focus on the source of their knowledge. The focus was two main sources, parents and religious leaders, as well as religious artifacts, for example the Bible. We believe this is because in China religious families are a minority in a relatively homogenous secular community. Parents might therefore highlight to children the importance of sources at younger ages.

We also looked at the relationship parental beliefs and children’s beliefs in China. We saw a very strong relationship between parental beliefs and children’s beliefs. This was especially true for children growing up in religious households. Children growing up in a religious minority might be more attentive to the testimony they’re receiving from parents.

One of the limitations in the inferences that we’re able to make in developmental science and psychology in general is that the majority of samples we’re drawing from are from WEIRD populations (Western Educated Industrialized Rich and Democratic.) One open question is the extent to which the results we’re seeing across studies are universal or are driven by cultural and environmental mechanisms that would necessarily have variability across the world. One of the excellent and challenging questions is, How do we begin to work with these understudied populations to begin to ask questions about ontogeny and diversity?

What book has been inspiring and influential for you?

Vygotsky’s book Thought and Language. His thinking about the importance of language and cultural communication as important transmission mechanisms has been really key to my work.

Where else do you find inspiration?

I’m a developmental scientist in a college of education. One thing that has really been driving my work for many years now is asking fundamental questions and designing really careful experiments that have real world meaning and impact the way we think about learning.

One source of inspiration is making sure we have connections to how kids are learning in formal and informal settings.

When improving education as a field, it’s helpful to remember that it’s both a science and an art. Knowing how to cultivate young minds is still relatively mysterious in lots of ways.  I’ve been focusing on the learning process as a way to tackle that.

Where do you hope we’ll be when you finish this project?

I am very excited about a project I am just starting together with my colleague Rebekah Richert at the University of California Riverside: the Developing Belief Network (www.developingbelief.com). In this project, we are hoping to use a team science approach to collaboratively exploring the development of religious cognition with a network of researchers. Once this network is established it could be amazingly important to use this variety of established field sites to ask many questions about how kids are embedded in their cultures, and how their cultural environment influences the ways in which they learn.

The big goal of this network is to highlight the transmission and acquisition process. How is it that kids are learning this information and how is it being transmitted intergenerationally and intragenerationally? My sense is that if we understood that it would get us to answer this question about how we know whether or not something is true.

We are as a world facing a whole host of challenges as 21st century learners, some of which we haven’t even thought of yet. How is climate change going to impact the sources of food we eat and the ways in which we move around? Are there ways that we can take what we know from social learning and actually shape narratives and conversations about concepts like that with important real-world significance?