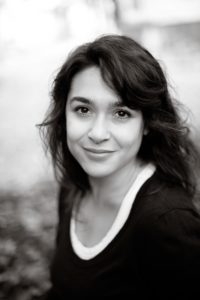 Betül Kaçar is an assistant professor at the University of Arizona in the departments of Cell Biology and Astronomy. Her research investigates molecular mechanisms of evolution, the origins of life, and the distribution of life throughout the universe. Her research team uses a new approach that infers ancient DNA sequences using phylogenetics, engineers these reconstructed DNA inside microbial genomes, and reanimates them in order to study ancient enzymes in modern organisms.

Kaçar’s work at the University of Arizona and previously at Harvard University has been supported by multiple grants from the John Templeton Foundation, including  the latest $357,843 grant “Molecular insights into historical constraints on evolution,” which concluded in May of 2019. This interview was conducted and edited by Nate Barksdale, lead writer for the John Templeton Foundation’s “Possibilities” newsletter.

How did you first get interested in molecular sciences and origins?

I immigrated to the United States from Istanbul, Turkey when I was 20 years old to start a biochemistry PhD at the Emory University School of Medicine in Atlanta. I was eager and perhaps should have been a bit afraid, but I was young and ignorant. In a way it’s a good thing — you don’t want to overthink these things, and I was just so excited about the scientific scene at Emory.

I’d first visited the U.S. a year earlier, on a Howard Hughes Medical Institute summer undergraduate research fellowship. I fell absolutely in love with the pace, the intensity, and the passion of witnessing a bunch of scientists getting together in a room (with no windows, oftentimes!) and voluntarily spending hours learning about a question that is so specific. It was extremely inspirational — I knew that I was hooked for life.

As a PhD student I studied enzyme biochemistry and biophysics — my initial questions were on how enzymes and their misbehavior may cause age-related diseases. But at the same time, I was becoming increasingly interested in more foundational, basic questions. We studied all these interesting and important proteins, but how did they come about? How did they evolve while maintaining their function? Why are they the way they are, when and how did they emerge?

At some point during your scientific path, you have to make a conscious decision. You either go for a thing that you fall in love with, or you follow what really bothers you. I went after the thing that really bothered me, which was the lack of integration of evolutionary thinking into the biochemistry curriculum.

Following this itch, I transitioned into evolutionary biology for my post-doctoral studies and threw myself into strange waters: molecular and microbial evolution. I started thinking about developing experimental systems to understand how proteins evolve inside cells. My initial studies were funded by NASA’s astrobiology program, where I worked as a fellow for years, and then at Harvard. Today, as a professor at the University of Arizona, I study and evolve engineered microbes that harbor resurrected genes in their genomes, to see if we can repeat an ancient protein’s evolution in a way that matches its own history, while gaining insights into early life and its origin on our planet. Like a Sherlock Holmes of biology, I try to make sense of what happened in the past: how did life survive catastrophes across geologic time, and what sort of changes did it go through to end up where we are right now? I’m told that I may be the only faculty member in the U.S. with dual affiliations in both astronomy and cell biology departments! It’s both terrifying and exciting at the same time: I spend part of the day in my cell biology laboratory, engineering a genome, and then I walk across the campus to learn about a new telescope being built. I spend my days thinking about how I can apply my laboratory systems to finding and making sense of life elsewhere in the universe.

What would you like people to understand about your research?

I want people to understand the value of recreating in the laboratory what happened in the past, and learning from doing so. Biologists, unlike geologists, can’t stumble upon a fossil that you can make direct inferences about — for biology, all we have is DNA. It’s not a fossil per se, it’s evolving, and overwritten, yet it carries information that we can use to understand the past. I think people miss out a lot by not thinking about biology in geologic timescales. There is a bit of magic in life’s past: in every DNA molecule we resurrect, we open a small window into the past, and we, albeit very slowly, begin to understand why life is the way it is.

I also care deeply about scientific outreach. After all, I myself am a product of scientific outreach — I’m where I am today because someone thought that a college student who was completely clueless about the workings of scientific pursue deserved a chance to learn. It’s all about passing the torch. I frequently create opportunities to share my work with my immediate community, whether through visiting high schools, and giving public lectures, or meeting with researchers in other fields. This is a pretty time-consuming activity, of course, but I get a lot of energy and satisfaction from sharing my work with people and exposing as many people as possible to seeing what’s happening inside my laboratory. My research is the direct beneficiary from the sort of mindset that stems itself from diversity as well — we combine tools ranging from genome engineering to biochemistry to microbiology to genomics, population biology, and paleobiology. We do it fearlessly and openly.

What are some big questions that currently inspire your work?

At a top level, I am interested in understanding how life, at the molecular scale, maintained its structure and architecture while also coping with an environmental catastrophe across geologic time. I am also fascinated by the cellular translation machinery – the biological machine that defines the origins of life itself. The translation machinery converts RNA into functional peptide sequences (enzymes). It’s composed of over a hundred different cellular components that have largely retained their basic functions across the entirety of biology — the translation machinery across all known organisms has largely functioned the same way across the span of time in which life has existed — it conserved its function across billions of years of environmental and macroevolutionary upheaval! This makes it arguably the oldest and most rigidified molecular machine found in all of biology, and therefore the best candidate for shedding light onto the circumstances of the transition between abiotic chemical and biochemical regimes.

You’ve talked about feeling a duty to give back in response to the opportunities you’ve had. Where does that come from for you?

Growing up, I didn’t have a lot of examples to aspire to be like. There were a lot of women in my family who did not receive a formal education, so I witnessed first hand the constraint that imposes on women. I was fortunate to be raised by a father who was very open-minded, and who always talked about how his own mother would’ve been better off if she’d had received an education. He used to tell me that they can take anything from you, except your education — your education and knowledge is yours to keep. It was a powerful thing for me to hear as a child.

Whenever I received a diploma, whether it be from elementary school or high school or college, I would come home and see all the women would cheer and even tear up with joy. It was an amazing thing to experience, and it moved me to go further, because I always felt I was doing these things now just for me, but for their unlived dreams also. Recently I was on TV talking about my work at NASA, my grandmother who lives in Turkey told me afterwards, “I do not understand what you’re doing there, but you look great talking about it!”

I think it’s so powerful, especially for young girls, to realize that they’re capable of shaping their own future. Once we inject them with a courage and self-belief, they can go on to do anything, including solving the hardest problems in biology, such as the origin of life, or the search for life elsewhere in the universe.

What ideas have been most inspiring or influential to you recently?

Recently I’ve been thinking a lot about Nick Nielen’s essay on scientific knowledge and scientific abstraction. It’s asking honest and difficult questions, discussing the somewhat unscientific way that scientists approach science: How do we come up with the questions we ask? What drives us to ask certain questions? It’s something that you can’t really measure. If you think about it, you can’t even compare great scientists to one another — you can’t say that what worked for Einstein would have worked for Darwin — their circumstances and sources of inspiration were so different.

Scientific inspiration — the passion, the motivation, the feeling that some research direction is right and that’s where you should go — comes from somewhere, after all, but it’s such an unmeasurable quality. Why is this the problem you’re interested in, the one you wake up thinking about? It’s something few people study thoroughly, how as a scientist sometimes you get this gut feeling, and that you know that’s the question you absolutely must go after, as though this is what you were born to do. When you get this feeling, I think you’ve just got to hold onto it and see how far it can take you.  Maybe you’ll never be satisfied, maybe it isn’t an answerable question, too bad, but hey, you will learn a lot in the process of chasing it — and that’s a good thing too!

Watch an episode of NOVA featuring Kaçar and her work.