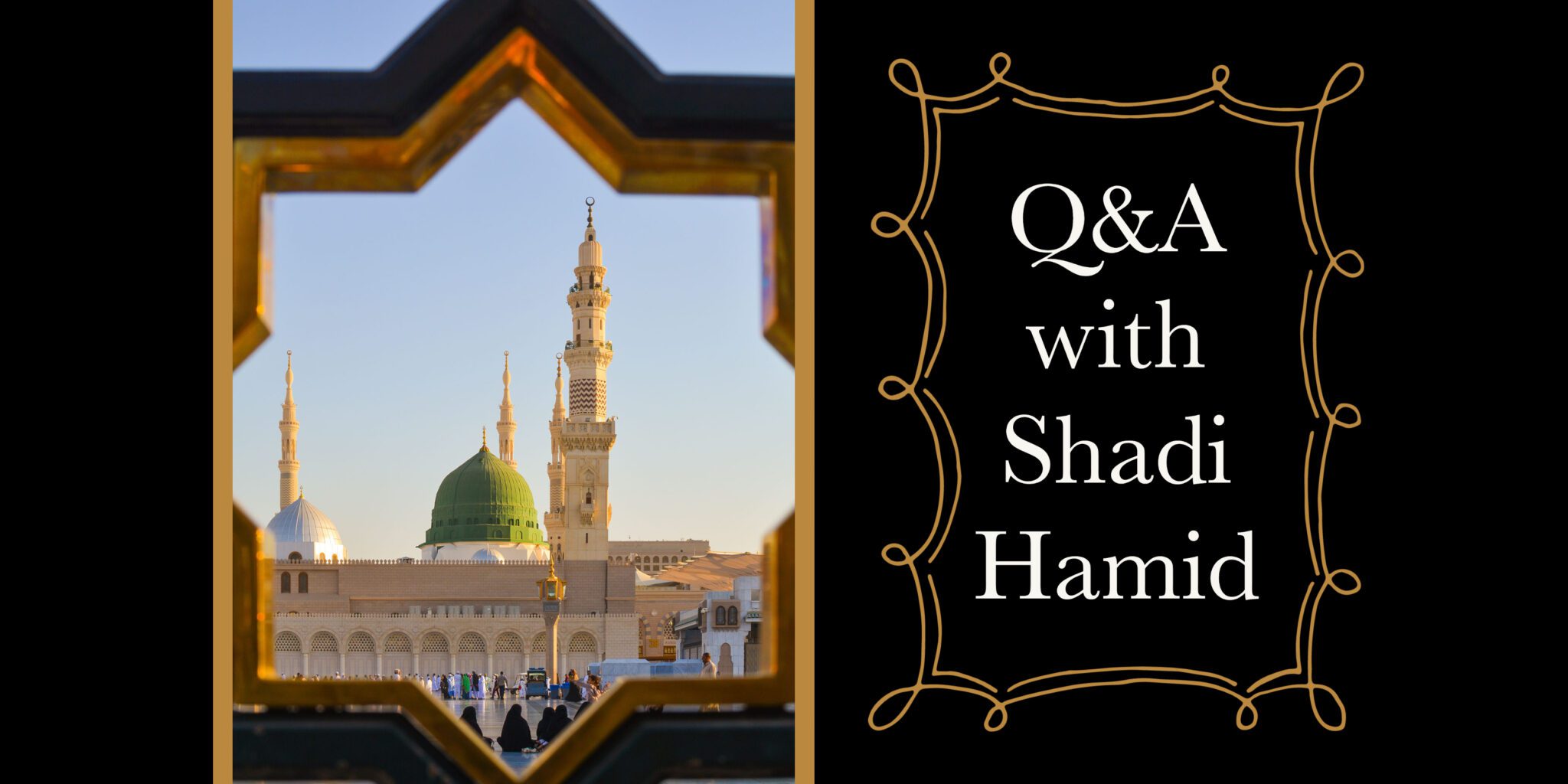 A conversation with Shadi Hamid about Islamic pluralism, religious literacy, and conversing across divides

Secularism is often presumed to be the foundation of a flourishing democracy. But this vision excludes many Islamic societies, where religion plays a central role in public life. Given that the role of Islam varies across the Middle East, what might a viable “Islamic Pluralist” model in the region look like? 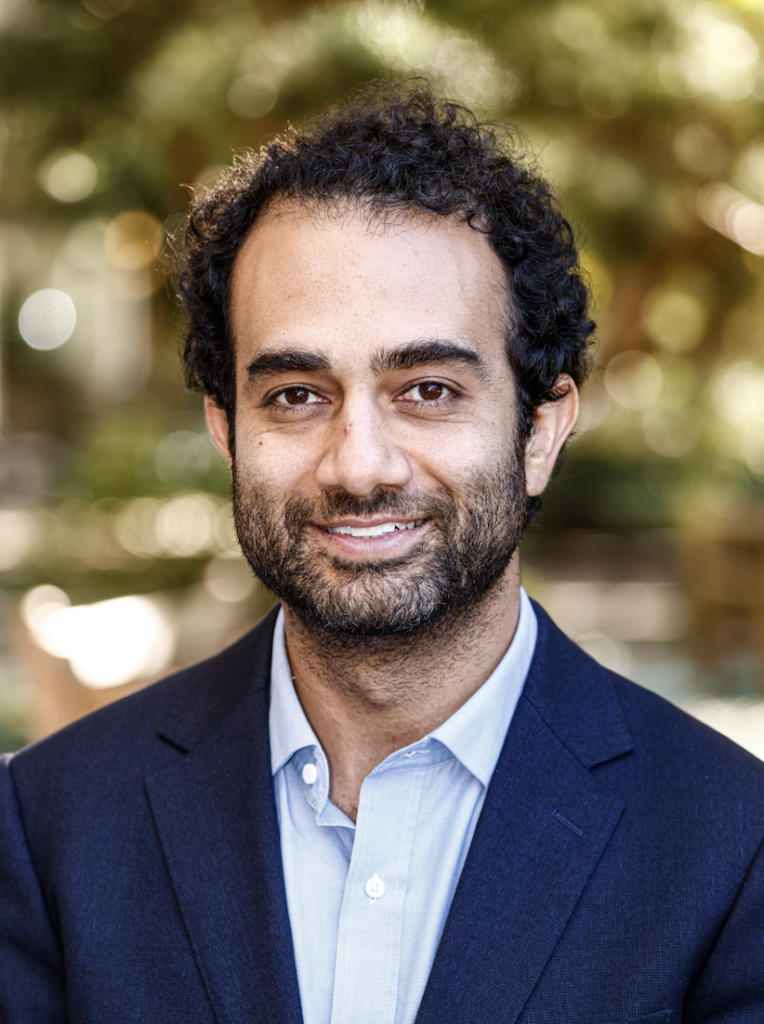 This is the question that spurred Dr. Shadi Hamid to design a dialogue series that will reimagine pluralism in Muslim contexts. Supported by the John Templeton Foundation, Hamid’s project aims to expand the American imagination and reshape outdated understandings of Islam’s role in the Middle East. Dr. Hamid is a senior fellow at Brookings, assistant professor of Islamic studies at Fuller Seminary, author, and contributing writer at The Atlantic. He works at the intersection of Islam, politics, identity, and culture, with a special interest in how people from diverse backgrounds and worldviews might learn to not only tolerate but learn from and with one another. By centering Muslim voices and emphasizing religious literacy, Hamid’s project invites American analysts, journalists, and policymakers—who often see religion merely as a problem to be overcome—to engage more creatively on Islam-related challenges.

Hamid argues that a generosity of spirit is a necessary step toward generative, interfaith dialogue. During our conversation he spoke about the lessons he’s drawn from Christian pluralism and of the influence of Dutch theologian and politician Abraham Kuyper on his own faith. In the following interview we discuss cultural blind spots around Islam, the possibility of pluralism in the Middle East, and the beauty of constructive competition between faiths.

What questions or insights led you to design this project? Why did you incorporate dialogue and listening as core elements?

There’s a really interesting debate going on about the role of religion in public life across the world, not just in the Middle East or in Muslim-majority societies. I think that there is now a willingness to reconsider some of our secular frameworks. There’s been this secular liberal consensus for a long time now, especially among educated elites in major urban centers, that more secularism leads to more reasonable politics. I think that consensus needs to be challenged, and now’s the right time to challenge it.

Here in the US, the role of religion has declined precipitously in recent decades, especially the last 20 years. Church attendance was hovering around 70 percent from the 1930s until 2000, and just in the past 20 years it’s dropped below 50 percent. That’s an unprecedented drop. There might have been this assumption that, with the decline of religion, people would be more rational or reasonable and we have a more peaceful society. That would be the secular bias at play. What we have found is that’s not the case. Polarization, fragmentation, and ideological divides have increased in recent years, as we can all see in obvious ways.

For Americans, I would like to think some of the openness to a new way of looking at religion might come from precisely the realization that a more liberal, secular society has not been a panacea in our own country. That, in turn, might open up Americans and Westerners to think more creatively about the role of Islam in public life. Maybe if the solution here in our own democracies isn’t secularism, then perhaps the solution in the Middle East isn’t secularism either.

In recent decades, cultural blind spots have dominated how many Americans perceive and approach Islam. Can you describe some of these specific blind spots or outdated understandings that color Western thinking?

It’s always been difficult for American observers to really appreciate the importance of Islam’s role in public life and politics. And it’s led to a number of profound dilemmas, including in US policy. When there are free and fair elections in the Middle East, religiously-inspired parties tend to either win or do quite well, and then we’re sort of put in this uncomfortable position. We want democracy in theory as Americans, or at least we think we do, but we’re not comfortable with democracy’s outcomes in practice. What’s really interesting about Middle Eastern contexts is that even ostensibly secular parties privilege some role for Islam and public life there. There are relatively few outright secularists in the sense of wanting to privatize religion or [saying] “We don’t think Islam has any role to play in public life.”

So then the question becomes, what is the appropriate role for Islam and public life if secularism isn’t the answer? We might want there to be secular outcomes in the Middle East, but in practice, those are simply not realistic. They’re unlikely for the foreseeable future. So we have to consider what the alternatives are. How do we accommodate Islam’s role in public life? That to me is really one of the fundamental questions facing the Middle East today.

This question of Islam’s role and Islam’s relationship to the state remain unresolved to this day. At some level, you can’t resolve foundational divides—you have to live with them, you have to let them linger, you have to find a way to come to terms with them. I don’t believe there are solutions to these problems. There are ways to manage them; there are ways to think about them more creatively. But if Americans are coming in thinking that there’s a solution, they’re not going to find one.

Well, yes, that’s what we’re hoping to find out. [Laughs.] Part of the problem is that there haven’t been many opportunities in the modern era for there to be Islamic pluralist models. They’ve been short lived because of political constraints, or repression, or civil war, or the return of authoritarianism, especially in light of the failures of the Arab Spring where we saw potentially interesting models in Tunisia and briefly in Egypt. Of course, there are short periods in various countries where you can look and say, that was the peak of a more pluralistic approach where Islamists and secularists were finding ways to coexist. And there are current pluralistic models outside of the Middle East including Indonesia and Malaysia.

What we’re really interested in doing in this project is taking a step back and thinking more theoretically about the foundations of pluralism and to imagine alternative futures. And to be more self-conscious about what the precedents are in Islamic tradition that we can draw on to encourage living with deep difference. This could also apply to Muslim minorities in the West as well. We expect this project to have relevance for American Muslims and for Muslim minorities in Western Europe. There’s also a broader set of lessons about the role of religion in general. Can Christianity play a constructive role when we’re thinking about living with deep difference? That’s why, as part of the dialogue component of the program, we want to bring in Christian scholars and theologians.

Tolerance is not actually the ideal.

"Tolerance suggests that you're just vaguely tolerating people that you otherwise may be uncomfortable with or despise. There's something beyond tolerance, which is based on a deeper sense of respect and appreciation for the other’s tradition.""

When it comes to Christianity, I don’t believe in its creedal truth claims. But that doesn’t mean that I can’t find beauty in the Christian tradition and find even “lowercase truth” in the Christian tradition. There are things that have inspired me that are based on a Christ-centered premise, but I don’t need to hold onto the Christ-centered premise to appreciate the insights that come out of that.

I sometimes worry about whether or not that’s reciprocated. Insofar as Islam came after, Muslims see Christianity and Judaism as part of an intellectual and theological lineage. Unfortunately, it’s harder the other way around, because Islam is not part of the intellectual lineage of Christianity, partly because it came after. It’s not always easy to persuade Christians that there is “small-t truth” in Islam. As I engage more on these issues with Christian interlocutors, I’m curious to what extent an evangelical interlocutor would be willing to say, just as I say about [Abraham] Kuyper and Christian pluralism, “I’ve looked into the Islamic tradition and there’s something beautiful about this approach, and that’s going inspire me to look at my own tradition anew.”

You want to see members of the other faith being inspired and doing good based on their own traditions—even if you don’t believe in their foundational premise.

Part of the idea is making that good-faith effort to immerse yourself in someone else’s world. That requires a certain kind of generosity of spirit and a certain kind of open-heartedness to suspend any discomfort you might have with a particular faith tradition. We don’t want to be in a position where dialogue requires dilution, because that’s not a real dialogue. I would never want to put pressure on an evangelical or Catholic interlocutor, and say, “I want you to be extra nice to me.” No, I want them to come straight-up with their deepest convictions. That may lead to some discomfort. But I don’t think generative competition or this kind of constructive engagement is possible if we’re not honest about what our first premises are.

I’m someone who believes that most of our divides are about foundational questions, but we don’t recognize them as such. We think they’re superficial, tribal, and we’re getting in these silly short-term debates. [Being honest about our premises] actually leads to a certain kind of respect. That’s what we have to model. From that discomfort can also come a deeper comfort over time, because there’s a kind of intellectual and emotional intimacy that comes from those very deep and sometimes difficult discussions across difference.

Learn more about our Culture and Global Perspectives funding area.

Read the Q&A with our Program Officer for Culture and Global Perspectives, Rashid Dar.