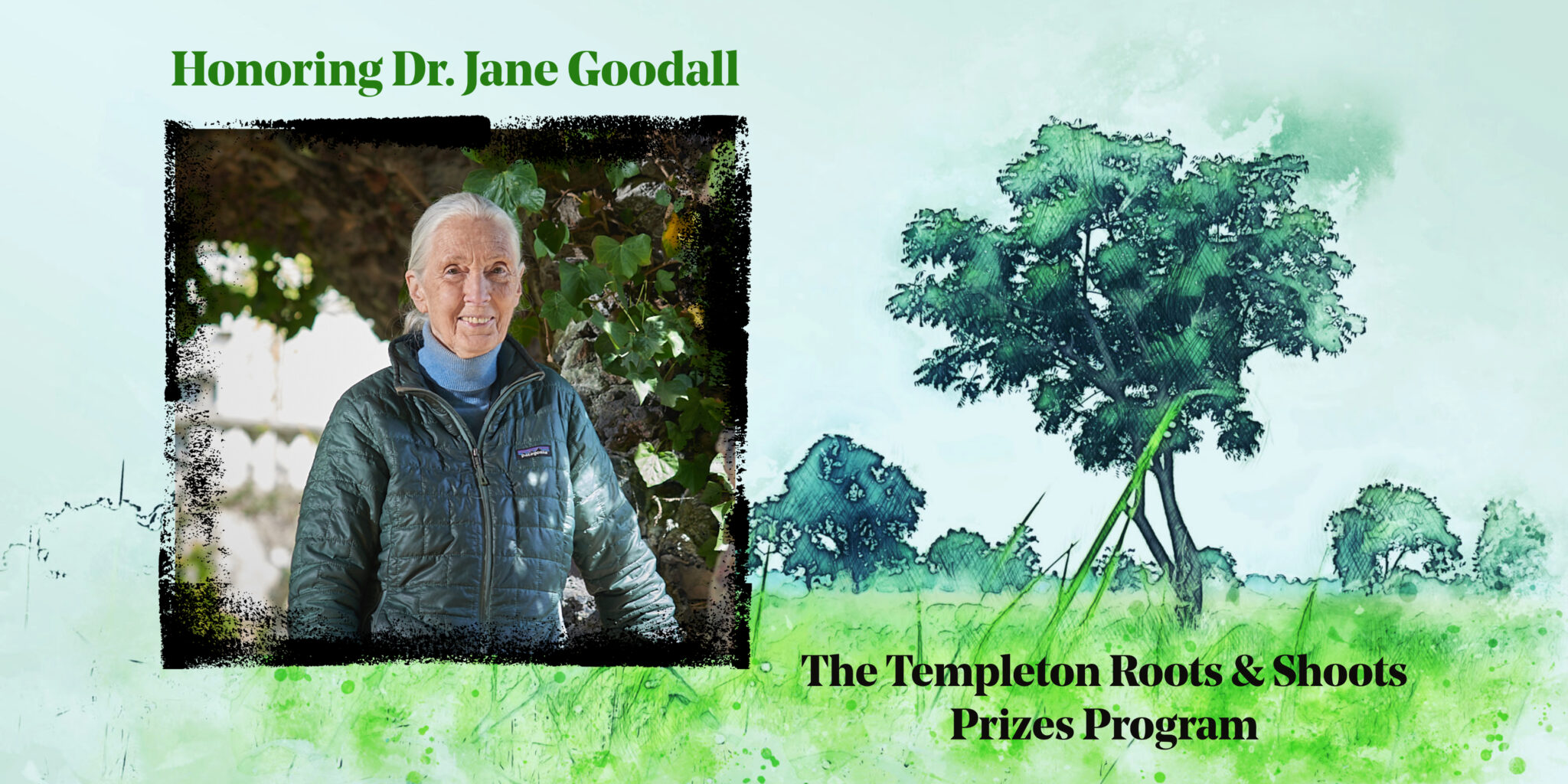 Throughout her career as a conservationist, humanitarian and advocate for the ethical treatment of animals, Dr. Goodall has championed the value of all life forms and been a global force for compassion, hope and youth empowerment.

In 1991, Dr. Goodall created a youth program encouraging young people to make a difference in the world. Today, Roots & Shoots is a program of the Jane Goodall Institute (JGI) and is active in more than 50 countries. In recognition of Dr. Goodall’s legacy, the Templeton Philanthropies are partnering with JGI to elevate the extraordinary projects led by Roots & Shoots youth and support their achievements through special prizes.

“These youth members that are curious and inspired to cultivate change throughout the world are my greatest reason for hope,” said Dr. Goodall. “Just as the motto that Sir John Templeton chose for his foundation, How little we know, how eager to learn, the next generation of visionary leaders can lead to great discovery among animals and ourselves.”

The Templeton Roots & Shoots Prizes will recognize people around the world whose exemplary achievements bring together science, hope, and action to create transformational change in their communities and in themselves.

“As an extension of my grandfather’s vision to discovering life’s big questions, we are excited to support the next generation of curious leaders to inspire hope and cultivate humility,” said Heather Templeton Dill, president of the John Templeton Foundation. “With this initiative, the Foundation is lending its name and philanthropic support to Dr.  Goodall’s vision for recognizing and empowering exceptional youth worldwide.”

Through the program, 30 young people and/or adults who work with young people from around the world will be honored and receive awards of $5,000 USD each. Awardees will be selected based on their exceptional work with Roots & Shoots at the intersection of science, compassion, and community – specifically those who exemplify curiosity and wonder and the pursuit of knowledge, as well as the expression of compassion towards people, other animals and the environment we share.

Recipients will apply the award to further their Roots & Shoots projects and their ongoing development as emerging leaders and visionaries. Nominees are currently being identified and awards will be announced in spring 2022.

About the John Templeton Foundation

Founded in 1987, the John Templeton Foundation supports research and catalyzes conversations that inspire people with awe and wonder. We fund work on subjects ranging from black holes and evolution to creativity, forgiveness, and free will. We also encourage civil, informed dialogue among scientists, philosophers, theologians, and the public at large. Our aspiration is to help people create lives of meaning and purpose and to become a global catalyst for discoveries that contribute to human flourishing.

With an endowment of $3.8 billion and annual giving of approximately $140 million, the Foundation ranks among the 25 largest grantmaking foundations in the United States. Headquartered outside Philadelphia, our philanthropic activities have engaged all major faith traditions and extended to more than 57 countries around the world.

About the Templeton Prize

Established in 1972, the Templeton Prize is one of the world’s largest annual individual awards. It is given to honor individuals whose exemplary achievements advance Sir John Templeton’s philanthropic vision: harnessing the power of the sciences to explore the deepest questions of the universe and humankind’s place and purpose within it. Currently valued at 1.1 million British pounds, the award is adjusted periodically so it always exceeds the value of the Nobel Prize. Winners have come from all faiths and geographies, and have included Nobel Prize winners, philosophers, theoretical physicists, and one canonized saint. The Templeton Prize is awarded by the three Templeton philanthropies: the John Templeton Foundation, based in West Conshohocken, Pennsylvania, and by the Templeton World Charity Foundation and Templeton Religion Trust, based in Nassau, The Bahamas. To learn more, visit TempletonPrize.org.

About the Jane Goodall Institute

The Jane Goodall Institute is a global community-centered conservation organization that advances the vision and work of Dr. Jane Goodall. By protecting chimpanzees and other great apes through collaboration with local communities, best in class animal welfare standards and the innovative use of science and technology, we improve the lives of people, other animals and the natural world we all share. Founded in 1977 by Dr. Goodall, JGI inspires hope through collective action, and is growing the next generation of compassionate changemakers through our Roots & Shoots youth program, now active in over 50 countries around the world. To learn more, visit JaneGoodall.org