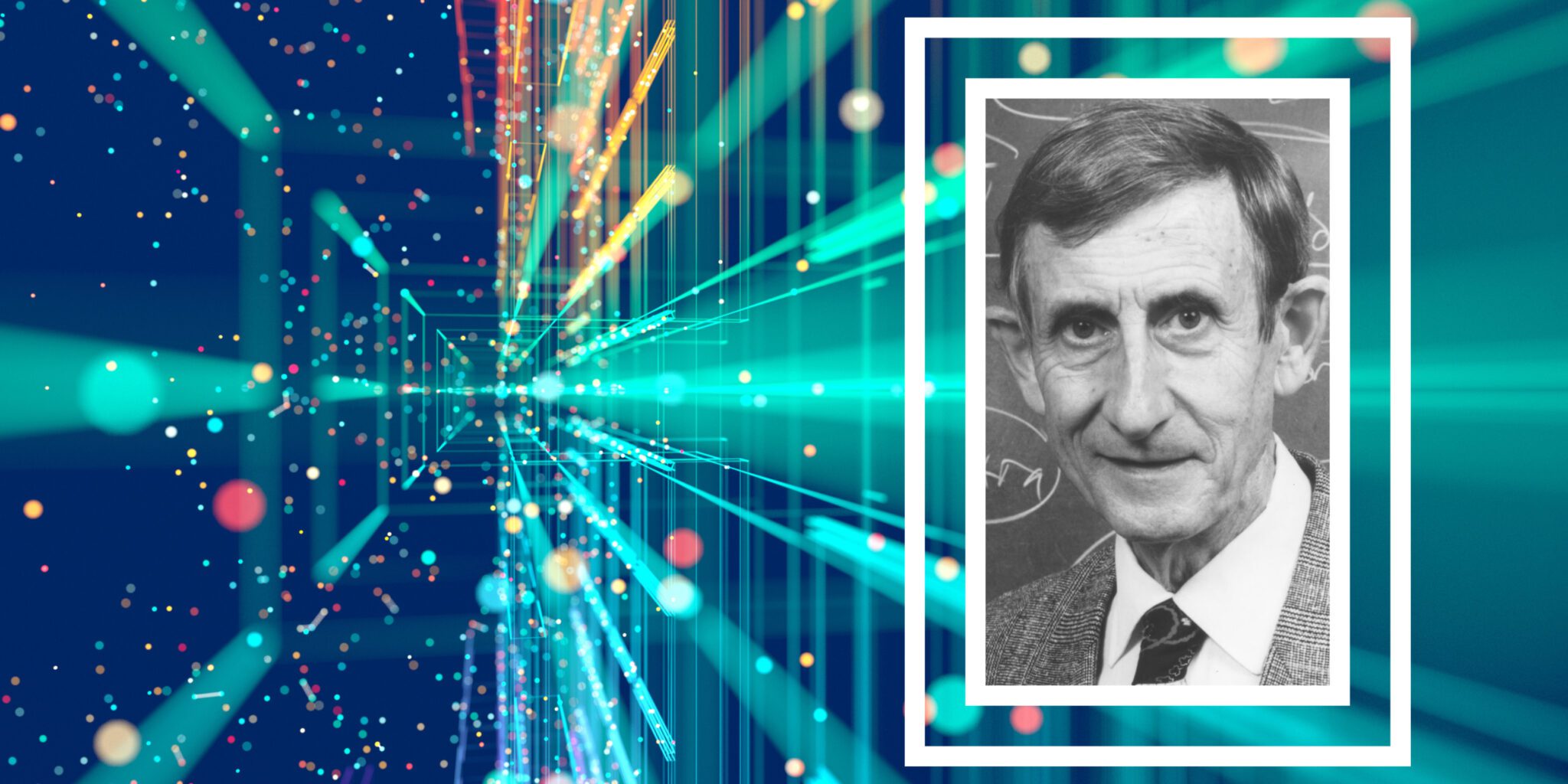 There are more things in heaven and earth than are dreamed of in our present-day science. And we shall only find out what they are if we go out and look for them.

Visionary, maverick, iconoclast, rebel, genius—all words that have been used to describe the late English-American physicist Freeman Dyson, who died in 2020 and would have turned 99 years old this week. With a career spanning almost 80 years, Dyson is most celebrated for his contributions to the foundations of quantum physics. But Dyson was also famed for his imaginative flair, allowing him to develop blueprints for interstellar spacecrafts powered by nuclear bombs, posit the existence of “Dyson spheres”—star-enveloping technologies created by advanced alien civilizations—and propose an unfashionable “dual origin” theory for how life arose.

A recent collection of essays edited by MIT physicist David Kaiser, “Well, Doc, You’re In”: Freeman Dyson’s Journey through the Universe, invited 10 scientists, journalists, and historians—including two of Dyson’s children—to reflect on many facets of his research.

Their examination of his legacy raises the question of whether Dyson was a complete anomaly, or if another such innovator could arise today.

The title of the book is ironic, based on a quip made by Nobel laureate physicist Richard Feynman when Dyson’s work was praised at a physics conference. But Dyson was in some sense an academic outsider, never having earned a doctorate, yet holding positions at prestigious academic institutions. He famously described himself as a frog among birds, where birds “fly high in the air and survey broad vistas of mathematics out to the far horizon” while frogs “live in the mud below and…delight in the details of particular objects, and…solve problems one at a time.” This frog-like propensity allowed him to hop back and forth between astrophysics, engineering, nuclear physics, mathematics, cosmology, chemistry and more, and crucially to deploy the deep analytical skills needed to make profound contributions in the fields he touched. But what drove his unique approach?

In the opening chapter, physics journalist Amanda Gefter searches for the childhood roots of Dyson’s unshackled imagination and his rebellious spirit. The son of a musician and a lawyer, Dyson likened the practice of mathematics to playing the violin, a creative act driven by beauty. Although he attended elite schools, Dyson had little to no formal science education in his early years. As war broke out while he was in high school, classroom time was reduced—a situation sadly familiar to school children in the pandemic.

His science was mostly self-taught amongst his friends, fueling his sense that science is a “subversion of authority, an international secret club of heretics.”

Dyson would later bristle at “predigested science” being taught as a “rigid and authoritarian” set of rules, with “kids…kept chained to their desks.”

Dyson’s frog-like hopping appears to be a survival strategy demanded during his formative years. His university degree in mathematics at the University of Cambridge was similarly disrupted by a stint with the British Royal Air Force Bomber Command, where he calculated ideal bomb formations against German targets in the Second World War. Later, he crossed the Atlantic and carried out his most significant work on quantum theory before moving on to Project Orion—run in the 1950s and 60s by the US Air Force, ARPA (now DARPA) and NASA—where he was tasked with designing an interstellar spacecraft.

In a chapter by Dyson’s son George, Orion is described as the mission of Dyson’s dreams. Against the backdrop of the space race with Russia, the atmosphere was ripe for giant leaps of invention, at which Dyson excelled.

The idea for an interstellar ship powered by nuclear bombs was the brainchild of Dyson’s colleague Ted Taylor. Together they crunched the numbers and calculated that exploding nuclear warheads could indeed lift a ship the size of downtown Chicago into orbit. Vitally, the body of the ship would withstand almost three thousand explosions without melting because the nuclear bursts would be short—akin to a human being able to run barefoot over hot coals without burning their feet.

In 1958, they submitted a proposal to ARPA for a working space vehicle, weighing in at four thousand tons, carrying 2,600 bombs, and were awarded just under a million dollars for a feasibility study. The project ultimately failed, however, following the signing of the nuclear test ban treaty in 1963. This was probably for the best, with Dyson himself noting that his estimates for deaths from cancer from nuclear fallout may have been withheld from official documents.

Dyson’s bomb-powered starship may have sounded like the stuff of novels, but it was one of his other notorious imaginings that was directly inspired by science-fiction. In 1937, Olaf Stapledon’s novel Star Maker described solar systems surrounded by light traps that captured and used escaping light energy. Dyson applied mathematics to calculate how a technologically advanced alien civilization might similarly harvest solar energy by encapsulating stars with megastructures.

He published a short paper on these so-called “Dyson spheres” in the prestigious journal Science, in 1960. Such a sphere would need to be made up of a swarm of smaller orbiting entities at staggered distances; a single large encompassing globe would collapse into the star due to gravity. As astronomer Caleb Scharf notes in his chapter, Dyson’s musings, though seemingly fantastical, were rigorous enough to allow him to predict the telltale signatures of Dyson spheres that astronomers could watch out for in the search for extraterrestrial intelligence. They also raised questions—albeit with outlandish answers offered—for how future generations of power-guzzling humans may survive.

The jump between quantum physics, nuclear physics and astronomy may not seem large. But Dyson was unafraid of diving into arenas lying even further beyond his immediate training. In the 1980s, he turned to one of the biggest open mysteries in science, the origin of life, as described in a chapter by science writer Ashutosh Jagalekar.

Dyson acknowledged that he himself had little expertise in chemistry but wanted to shine a physicist’s torch on to the problem. Up to that point, the prevailing strategy had been to focus on replication as the essence of life; molecules must be able to pass down hereditary features to the next generation. Indeed, today’s most popular origin-of-life model builds on this principle, hypothesizing an “RNA world,” in which RNA— molecules involved in gene expression in cells that can self-replicate—proliferated first. DNA and other proteins only evolve later in this scenario. But origin-of-life researchers still struggle to explain how the first self-replicating RNA molecule would have arisen.

One issue for RNA-world-proponents is that perfect replication is an incredibly complex process, and it is tough to envision it simply popping up and working smoothly. But Dyson examined another defining characteristic of life, metabolism—the ability to consume and use energy—which could potentially arise more easily. Metabolism was long deemed secondary to replication, with researchers assuming that metabolism would simply follow in systems able to replicate. Dyson’s alternative origin of life model, however, raised the stature of metabolism, suggesting a dual-origin scenario in which metabolism and replication could have arisen separately. Jagalekar notes that whether replication or metabolism came first is still not fully understood, but Dyson’s work has been incorporated into current studies and is now applauded for making the study of energy consumption a central issue in this endeavor.

A recurring theme throughout the book is Dyson’s skill at challenging authority in areas beyond his immediate training. But this was a time when science was less specialized, and frogs could hop between disciplines with greater ease compared to today. While Dyson’s fearlessness at venturing into neighboring fields is largely celebrated in the book, it is briefly noted—a little uncomfortably—that later in life, his rebellious attitude led Dyson away from the consensus view on climate change.

Could a successor to Freeman Dyson arise today, offering imaginative solutions to such a diverse range of scientific puzzles? Perhaps it is too much to expect a single person to step into such big shoes. But maybe the most important lesson to learn from Dyson is the value of asking challenging questions to stimulate and inspire others outside one’s own discipline. “Well, Doc, you’re in,” Feynman may have joked to Dyson, but Dyson’s unique power lay in his perspective as the ultimate outsider.

The Universe According to Frank Wilczek