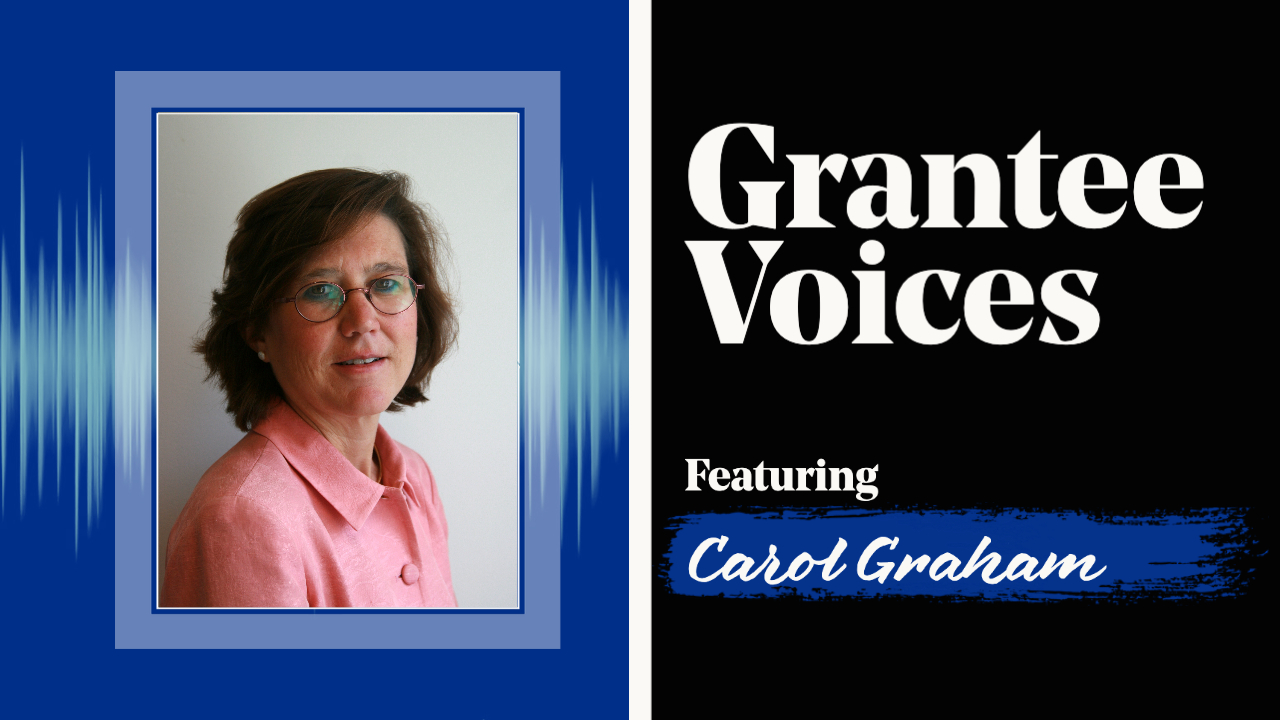 The ‘Grantee Voices’ series features contributions from our remarkable grantees. This article was written by Carol Graham, who is the Leo Pasvolsky Senior Fellow at The Brookings Institution as well as College Park Professor at the University of Maryland.

Fake news, conspiracy theories, the shuttering of local newspapers, controversies over social media, rumors of bizarre side effects from COVID vaccinations, and the erosion of basic trust in scientific facts increasingly distort our public debates. There are many reasons ranging from information spreading technology to media business models to the nano-second news cycle. All these likely play a role. Yet that does not explain why some people and places are so much more vulnerable to misinformation than others. My research suggests that there are strong linkages between vulnerability to misinformation and despair.

There are structural reasons that explain these differences that also relate to despair. Not surprisingly, it is much easier for misinformation to spread in places with low levels of education, lack of access to health care (particularly mental health care), and few trustworthy sources of local news. Skepticism about the value of education, which in part results from despair, is a key factor in the erosion of belief in science. Together, these factors result in a weak base upon which to challenge fake news and rumors, which all too quickly become “the truth.” It is not a coincidence that low vaccination rates are concentrated in such places. So are despair-related deaths.

“Deaths of despair” - premature deaths due to preventable causes such as drug overdoses, alcohol poisonings, and suicide - have taken over a million lives in the past decade and precipitated a decline in our national average life expectancy since 2015.

Not coincidentally, these deaths are disproportionately concentrated in the very same places in the country where misinformation is most rampant. Not only do many of those places display the structural constraints noted above, but they also have a high concentration of prime-age labor force drop out, poor health indicators, and high rates of despair and opioid addiction.

Despair is, most simply put, lack of hope. Despair describes the plight of the many that are ambivalent about whether they live or die. This condition heightens risk taking, behaviors that jeopardize health and longevity. If people do not believe in their futures, they are much more likely to succumb to risky behaviors and to beliefs that jeopardize those futures, such as drug use and violent solutions to social problems.

Entire communities can experience this sense of helplessness, especially when they are confronted with difficult choices and rapid change. They are often stuck in two worlds, with the old ways that held meaning disappearing, while the changes needed to succeed in the new world seem impossible. Death (slow or fast) becomes the simplest choice to stop the pain. Drug use and suicide are internal expressions, while expressed misery, frustration, and anger—which have security implications—are external ones.

Too many communities – and individuals within them – are living in such a state, as demonstrated by our mortality figures. Prior to the COVID pandemic, beginning around 2005, over 70,000 people died of such deaths each year. In 2020, due to the mental health shocks related to the pandemic as well as to the rise in prevalence of the lethal opioid derivative, fentanyl, over 90,000 Americans died of overdose deaths alone, a 30% increase in those kinds of deaths compared to 2019. The suicide rate – remarkably – remained the same in 2020 as in 2019. Yet we do not know how many of those overdose deaths were intentional (estimates of intentional overdose deaths range from 15-60%, as it is very hard to determine intent if there is no note or other clear evidence available). While we can argue about what is happening at the margins of these tragic numbers, there is no doubt that the U.S., one of the wealthiest countries in the world, has a crisis of despair-related death on a scale large enough to reduce our average life expectancy.

What is less known and less often discussed is that there are clear links between despair and the misinformation that is plaguing our democracy.

There is research by neurologists that find clear linkages between despair and vulnerability to misinformation and the related increase in radicalization. The confluence of online and physical organizing enhances that spread. Factors that underpin despair can make people more susceptible to extremist ideologies and create entire geographies that are prone to radicalization and violence. Poverty, unemployment, income inequality, and education levels are all relevant.

Social identity and psychology, sacred values, neurocognitive deficits, and dehumanization (as in many work environments today) are internal factors that can activate radicalization and violent action. External factors include radical social networks, demographics and perceived grievances, traumatic life experiences, and social media. Increasingly, despair is considered a national security issue as well as a health crisis.

In contrast, people who are hopeful about their futures, which includes believing that they can make them better, are much less likely to believe misinformation. Having meaning and purpose in life provide anchors that are not only key to life satisfaction and hope, but that make it far less likely that individuals will fall for false promises or rumors. Hope is an important part of the equation precisely because it has agentic properties based in the belief that internal and not external forces are in control of individual lives.

My recent surveys of low-income adolescents, meanwhile, highlight the importance of hope in the prospects for better lives, but there are large differences across racial groups. African American young adults, while typically more materially deprived than white ones, are much more likely to aspire to higher education and to have a family member or other mentor who supports them in those aspirations. In contrast, low-income white young adults are much less likely to harbor aspirations beyond high school and, equally unfortunate, are also unlikely to have a parent or other mentor who supports higher aspirations. That in turn, suggests that many of them will have futures of despair.

We are at a dangerous point in our history and have a very fragmented civil society. There are myriad of reasons and many possible solutions. Yet we cannot solve these problems if a significant proportion of our society is mired in a crisis of despair.