Citizen scientists are using gameplay to help scientists understand more about what makes us uniquely human. 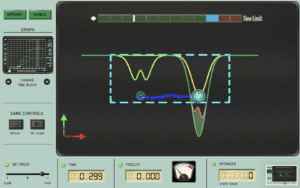 When the novel coronavirus arrived in the borders of Randomberg, a special “Corona Minister” was appointed to decide how to respond, choosing when to enact and relax interventions and restrictions — from information campaigns to closed borders and full quarantine — to balance public health, economic prosperity, and civil liberties. Randomberg is a fictional polity created for an interactive game where users take the role of Corona Minister, switching policies on and off as the coronavirus timeline advances and as indicators change for population health, economy, mental health, and civil rights. The purpose of the “Corona Minister” game — designed by the Denmark-based citizen science gaming website ScienceAtHome — is less to provide a fully accurate epidemiological simulation for COVID-19 than to help players understand the kinds of trade-offs involved in guiding a society through a pandemic. Jacob Sherson, a physicist at Aarhus University who launched and leads ScienceAtHome says that his team created Corona Minister as a much more complicated version of the classic “trolley problem” dilemma, a thought experiment weighing the ethics and consequences of intervention in an unfolding tragedy. “The big problems that we have today involve both technical components and social aspects, psychological and sociological aspects, individual and collective aspects,” Sherson says. “We really need to understand the interplays between technology, individual cognition, and coordination on a grander scale, to see how we can do what you might call public democracy in new ways.”

The ScienceAtHome platform got its start with “Quantum Moves,” a game that Sherson and his team developed (with funding from the John Templeton Foundation) as a means of crowdsourcing human intuition to improve the results he was getting in his quantum physics lab: how best to use finely tuned laser pulses to coax individual atoms into desired quantum states. Figuring out the optimal strength and timing of those pulses generated a landscape of possible combinations of settings that was staggering and there was no good way for the algorithm to know which parts of that landscape were the most promising to examine. The thousands of people who played “Quantum Moves” helped Sherson’s team to identify new strategies for searching. In a paper published in the journal PNAS, Sherson and his co-authors showed that the best solutions to a related quantum problem were reached through an interface allowing players to combine human intuition with the researchers’ complex machinery. In the paper’s conclusion they wrote that “the growing emphasis on human–computer interaction, as computer algorithms are integrated more deeply into the scientific research methodology, will challenge the clear divide between social and natural science.”

The 15 games currently playable on ScienceAtHome are Sherson and his team’s initial efforts to create a future in which social scientific insights about things like human decision-making, intuition, and creativity have a crucial place in the toolkit for all kinds of scientific inquiry. Several games — including a sequel to the original “Quantum Moves” — are directly focused on physics-based optimizations, but others are designed to help researchers identify and investigate different cognitive styles. “Tower Builder” combines a traditional character assessment with a physics-based game to test a more robust way for social science researchers to assess potential team members. “Skill Lab: Science Detective” is a collection of mini-games in a playful cartoon world where players complete tasks like finding hidden objects. From a research perspective, Skill Lab’s goal is to generate a map of players’ cognitive skills that can be used to understand how they affect a player’s performance in other games from ScienceAtHome. By having an expanding suite of high-quality games, Sherson says that ScienceAtHome can become a valuable social science resource that is more than the sum of its parts. It differs from many other citizen science sites, which are either focused on a single project or — at the other extreme — are clearinghouses for multiple projects without mechanisms for sharing insights between projects. Sherson sees ScienceAtHome’s relationship with individual players as a sort of arc — beginning with a naive phase where they are trying things without being told what the purpose is, but maturing later into a phase where researchers might communicate more directly about the nature of the scientific questions at hand. “We’re now trying to build structured interfaces to allow for participants to engage in more steps in the research cycle,” Sherson says. This is what makes Sherson’s citizen scientists distinct from mere research subjects, making them, at least in small ways, co-investigators.

One of Sherson’s lessons while developing Quantum Moves was how crucial it was to involve experienced game designers to make the project as approachable as possible. “A lot of psychology research is conducted in unnatural settings,” Sherson says. “If we sit in a lab and do something, we are acutely aware that we’re being measured. That has a lot of implications for how we answer those questions. But when we’re playing a casual game on the phone, then we feel that this is an extension of ourselves.” Sherson believes that seeking such natural, playful expressions of research questions not only yields more accurate data from participants, but also stretches scientists to envision new ways of presenting their research questions. “If you want to solve a problem, you need to be good at representing it from different angles,” he says. “Because viewing it from the right angle makes it simple.”

Sherson sees the kind of social science user profiling possible with the ScienceAtHome platform and other citizen science initiatives as what he calls a “democratic alternative” to the social science research and profiling already being undertaken at scale by data-hungry Silicon Valley companies. “If only those corporations gain increasingly detailed insights into our human psychology, then we are left defenseless to all of the tricks that they may be coming up with to make more money or change our behavior,” Sherson says. Citizen science-fueled insights on human decision-making offer an alternative vision of a less adversarial interface between human psychology and the best of what computer-based artificial intelligence can offer: “There’s a lot of research happening about what artificial intelligence is and what it can do,” Sherson says. “But the more we look, the more of a gap we find in terms of what human intelligence is and what human problem solving skills really are.”