Citizen science in the quantum world

A computer game makes quantum physicists of us all — and helps uncover some of what it means to be human. 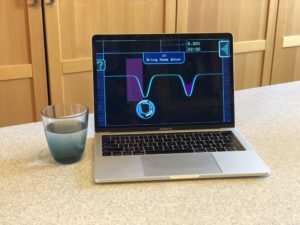 The task is simple: using your phone’s touchscreen, tap and drag an onscreen trough to move a sloshing liquid from one part of the screen to another. But for the more than 200,000 people who have played “Quantum Moves,” what has been accomplished is remarkable. Although the game was built by experienced game designers and developers, it was created by scientists at Denmark’s Aarhus University as a tool to leverage human intuition to solve cutting-edge problems in quantum physics. And it has succeeded beyond even its creators’ expectations.

The game’s curves and sloshing liquids are a visualization of individual atoms’ behavior when being coaxed into desired quantum states with finely tuned laser pulses. Figuring out the optimal strength and timing of those pulses proved a difficult problem for standard computer algorithms to solve — the landscape of possible combinations of settings was staggering and there was no good way for the algorithm to know which parts of that landscape were the most promising to examine. “Searching for complex solutions to complex problems is like searching for a needle in a haystack,” project leader Jacob Sherson notes. His initial hope was that with enough players, some would happen upon the right places to look for the needle. “The big surprise of our project was that people didn’t seem to attack the problem very broadly or very differently — they actually all seemed to have similar related strategies,” he says. Human players, taken in the aggregate, were exceptionally good at identifying promising approaches to the problem and eliminating unpromising ones. “That’s what we humans do all the time,” Sherson says. “We recognize our own limitedness in the sense of not being able to search for everything.” Once the human results told the computers where to look, the algorithms were able to generate even better results than any individual high scorer.

The path to scientific success for “Quantum Moves” was not without its own surprise turns. Initially, Sherson and his scientific colleagues had hoped to handle most of the development themselves, believing that the prospect of contributing to cutting-edge research would be enough to draw players and get them to stick around long enough to generate useful data. “My hope was that people would actually play less engaging games than normal,” Sherson says. “If I’d thought I had to invent an ‘Angry Birds,’ I never would have dared to start.”

After a few initial missteps, Sherson realized that the skills of experienced game designers would be needed, along with a lot of thought into how to make the games as fun as possible. “If you want to do something like this, you have to do 95 percent of the work so that people can start,” he says. “Even though it’s citizen science, there are no shortcuts. You really have to do the work so that people can get involved.” For Sherson’s games, that means that some levels are designed to offer easy, engaging training to help users master the controls and techniques of the simulation, while others pose the more difficult experimental scenarios the scientists are hoping to optimize.

One fascinating aspect of “Quantum Moves” is the degree to which players can provide useful research solutions for experiments despite having no understanding of the types of problems being solved. Indeed, Sherson was initially reluctant to provide detailed explanations to players about the science underlying the game, for fear of preconditioning them to only try certain strategies. But after surveying users of an early version of the game, he became convinced that expertise needn’t be the enemy of intuition. “We interviewed some of these people and one of them was a retired microwave systems engineer from Italy who said that playing around with this interface was just like when he worked with microwave systems, because he never really understood his own microwave systems. His work as an engineer was to gather information and build up models of what will actually happen when I manipulate this unexplainable black box.”

For the future games Sherson is developing — with a further Templeton grant entitled “Unfolding Quantum Intuition” — he plans to explore a variety of levels of explanation. “Right now, in half of the projects the subject is the information gatherer, and in half of them they can be thought of as research assistants,” he says. “But now we are trying to ultimately bring players to the level of being able to pose their own challenges — that will be the future of citizen science.”

Sherson is also working to come up with new games that apply the intuitive lessons of “Quantum Moves” to new areas of scientific inquiry. There are plenty of thorny problems in the natural sciences that are mathematically well-defined but computationally difficult, making them well-suited for “Quantum Moves”-style simulations. But such games also provide an opportunity for social scientists and cognitive researchers to gather huge amounts of data about how human creativity functions.

“We’re starting to invite more research disciplines into the design process so that they can actively build in their hypothesis,” Sherson says. “We are offering hypothesis-driven research in social science on a scale of thousands or hundreds of thousands of subjects, where they are used to a scale of 10 or 20 subjects.”

TO GUESS IS HUMAN

Machine learning, of course, promises to train computers to engage in very similar pattern-based problem-solving. Will the next generation of AI systems be able to take over this kind of creativity? Sherson doesn’t think so — or at least, he thinks that optimizing machine learning will require knowing much more about how human beings tackle these kinds of complex, intuitive problems. “I always stress that I think that the future of humanity lies really very much on us continually focusing on what is distinctly human,” he says. “If we want a future with intelligent machines, we need a much, much deeper understanding of ourselves.”