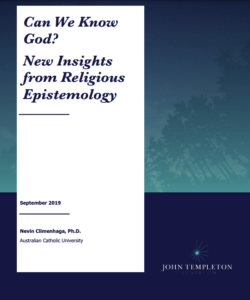 Are religious beliefs rational? Is knowledge of God even possible? Are the evils we observe in the world evidence against God’s existence? Since the late twentieth century, epistemological questions of this nature have been central to the philosophy of religion. The work of two leading theistic philosophers, Alvin Plantiga and Richard Swinburne, divided the field of research into two distinct research programs. Broadly speaking, the debates between the two camps are representative of two larger positions in epistemology: internalism, according to which the rationality of beliefs is only determined by factors internally accessible to the believer; and externalists, according to which the rationality of beliefs can be partly determined by factors outside the believer’s mind. While fundamental disagreement still exists between the two factions, the rise of other questions has taken precedence with regard to the direction of contemporary research. Two recent Templeton research grants, New Insights and Directions for Religious Epistemology, led by John Hawthorne, and Knowing in Religion and Morality, led by Michael Bergmann and Patrick Kain, explore new subsets of questions.

In this research review, Dr. Nevin Climenhaga of the Australian Catholic University surveys the landscape of religious epistemology, covering a wide range of topics: skeptical challenges to religious belief arising from the existence of religious disagreement, the idea that Darwinism threatens the existence of an objective morality, and the question of whether religious faith can be separate from religious practice.

The Implications of Religious Disagreement

Let’s consider Jane, a typical Christian who forms her Christian beliefs and knowledge of God based on teachings from her parents and religious instructors. The research review explores the various ways in which the diversity of religious belief might make Jane’s beliefs irrational, or at least prevent them from amounting to knowledge. The fact that people of all religions generally believe what their parents teach them suggests that their beliefs are not truth-sensitive—they would have held them even if they had been false. Climenhaga also examines whether one’s awareness of deep religious disagreement makes one’s own religious commitments irrational, or whether it just undermines their level of confidence.

Consider the moral dispositions of our ancestors. In general, natural selection will select for behaviors that promote the reproductive success of their bearers. If a belief in God leads to consistent rule-following, and this increases social stability, this view may take hold in a human population whether or not God actually exists. Some scholars argue that our moral dispositions are consistent with this naturalistic model. Accordingly, even if there were independent moral facts, they played no role in the evolution of human morality.

Finally, Climenhaga turns to the discussion of the nature and rationality of religious practice, citing essays from several philosophers who argue that religious faith requires more than just knowledge of God — it requires regular practice. In this model, belief in a higher power requires some knowledge of how to properly perform acts of faith or worship, demanding a higher level of engagement with the object of one’s belief.

While there has been significant advancement in scholarship surrounding religious epistemology in recent years, the field continues to grapple with unanswered questions ripe for further research.