Where do we come from? Where are we going? New research from the Santa Fe Institute explores key questions related to humanity, society, and the existence of life in our world.

Complexity in nature and society. Illustration by Jin Xia.

Explore the stories from our three-part research series on complexity from the Santa Fe Institute, a leader of groundbreaking, multidisciplinary research on complex systems.

Part 1: The Principles of Complexity: Understanding the Hidden Sources of Order by Dr. Stefani Crabtree 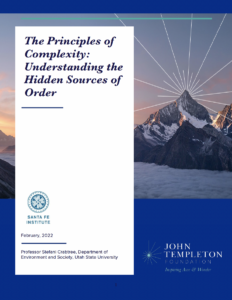 Since at least Plato, Western philosophers have attempted to understand how and why life exists. Attempting to understand our place in the web of life has led scientists, and others with a philosophical nature, to live and study among different societies and ecosystems.

Complex adaptive system science has aided the pursuit of understanding who we are, where we come from, and where we are going. When Homo sapiens spread out of Africa as early as 125,000 years ago, our species began to rapidly modify environments as it encountered them. While the initial impacts of humans on ecosystems may have been small in scale —  over time, human impacts across the globe compounded and intensified. From these simple antecedents, complex structures among tens of thousands of distinct cultures grew. Yet despite differences among these varying societies across the 510 million square kilometers of land on earth, human action may be in fact subject to unifying principles of organization.

A new research paper produced by the Santa Fe Institute examines the principles of complexity and hidden sources of order in our world. Professor Stefani Crabtree of the Department of Environment and Society at Utah State University begins by establishing a unified definition of complex adaptive systems and then goes on to explore how complex adaptive systems science is useful for understanding the order that governs social and ecological systems. In doing so, Crabtree discusses some of the major questions at the heart of our understanding of humanity, including: Where do we come from? What are we? Where are we going?

Want to learn more about her conclusions? Read the full review.

Part 2: Autocatalytic Sets: Complexity at the Interface of Chemistry and Biology by Dr. Wim Hordijk 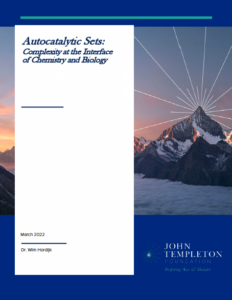 In his review, Hordijk explores some of the fundamental questions underlying research on autocatalytic sets which, in their original conception, were largely inspired by the origin of life problem. His lines of inquiry include: How does chemistry become biology? How do chemical reaction networks acquire self-sustaining and self-reproducing abilities, and how do they evolve to become more complex and diverse?

Ultimately, Hordijk concludes that there is much to be done in this field of research. The eventual goal will be to have autocatalytic sets spontaneously emerging and evolving in controlled laboratory settings, which could have important applications in, for example, medicine and synthetic biology. 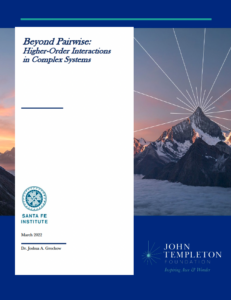 Complex systems are often defined as systems composed of large numbers of individual parts, in which the global behavior of the collective is difficult to predict or understand from the behavior of the constituents. The resulting global behavior is often called “emergent.” Classic examples include the emergence of cognition from neurons, the emergence of cities from human activity, or the emergence of life from a soup of chemicals. Some of the deepest, most urgent, and most important questions facing humanity today concern interconnected complex systems: food webs & ecosystems, cities & economies, poverty & systemic racism, diseases & pandemics, sustainability & global warming.