A ‘wide angle’ view of science and religion from the AAAS 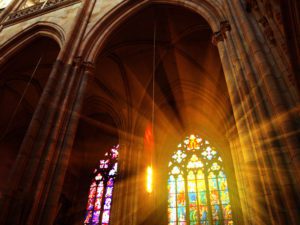 There is no organization more closely identified with the scientific community in the United States than the American Association for the Advancement of Science (AAAS). But for over twenty years, the AAAS has also been actively pursuing connections to religious communities. Since 1995, its Dialogue on Science, Ethics, and Religion (DoSER) has connected representatives of these two very different kinds of human response to our extraordinary universe.

In 2013, with the support of the John Templeton Foundation and the Templeton Religion Trust, DoSER launched a project called “Science for Seminaries,” focusing specifically on the institutions that prepare clergy across the breadth of Christian traditions in America. One recent fruit of that project is a video series called “Science: The Wide Angle.” Though it is designed for seminary classrooms, it is likely to be useful in many other contexts.

For too long, the idea of a “war” between science and religion has dominated the imagination of both the religiously and the scientifically minded — even though historians of science have abandoned the idea that science and religion were ever fundamentally at odds. True to its name, DoSER’s new series provides a wider frame of view. It is built on interviews with leading scientists, philosophers, and historians who combine a sense of awe and wonder with rigorous empirical investigation. Their varied perspectives give glimpses of the complex reality of how science actually works, and how it engages the hearts and minds of those who practice it. Indeed, these videos provide at least a taste of a possible new integration of the humanities and science.

“Science loves problems,” says Dr. Michael Ruse, director of the Program in the History and Philosophy of Science at Florida State University, at one point in the episode called Awe & Wonder: Scientists Reflect on Their Vocations. “Any fool can find the solution; it takes a genius to find the questions.” In that spirit, these are not so much teaching videos meant to convey a single didactic point, as they are meant to inspire emerging leaders to think more broadly, and to recognize the value of (or someday conduct) world-class science.

Other scholars featured in the series include Sylvester James Gates, a theoretical physicist and Regents Professor at the University of Maryland known for his work on supersymmetry; Brother Guy Consolmagno, astronomer and director of the Vatican Observatory; Jeff Hardin, professor of zoology at the University of Wisconsin; Jennifer Wiseman, senior astrophysicist at NASA and program director of DoSER; David Charbonneau, professor of astronomy at Harvard University; and other voices from varied religious traditions.

While they do not share a single religious point of view, there is a remarkable consistency in the themes these individuals describe as most meaningful in their work. Human beings are connected, in the atomic building blocks of our existence, to all other species and to the entire universe — we not only gaze upon the heavens but in a real sense are part of them. We are, for now, the only creatures we know of in the universe that reflect so systematically and reverently on the physical systems that make our life possible, from the smallest to the largest scale; and we are the only creatures that seem to feel such an urgency to discover the meaning behind the cosmos of which we are a part. As this series demonstrates, seeing those scientific and religious impulses as inherently at “war” is only possible when using far too narrow a lens.

Instead, at the seminaries participating in the DoSER project, and wherever these videos are shown and discussed, a new generation of religious leaders will discover that science — and scientists — are part of the “wide angle” their faith can and should survey.