“Thoughts about God continue to haunt our species”

Theologians of the Age of Faith considered their works pursuits of science. They grounded their arguments in logic and argued, not for evidence beyond a reasonable doubt eliminating faith, but for a preponderance of evidence, demanding belief. In other words, they used the standard of our civil courts — the preponderance of evidence — for judgment in favor. Atheists prefer a criminal court’s standard and demand evidence beyond a reasonable doubt, which would eliminate the element of faith so essential to theistic belief.

The great theologians of the past grounded faith in reason because they believed that we are created in the Imago Dei (the metaphysical image of God), and since the faculty of reason separates us from animals, the God in whose image we are created must be a God of reason. Let us not forget that many of the great theologians of the past were also working scientists and accomplished mathematicians. All of them, without exception, were first rate logicians committed to reason. Avicenna, known in the West for his medical contributions, was revered in the East for his achievements in metaphysics, theology, and logic. The great philosophers and theologians up until Kant sincerely believed that belief was logical and arguable, and metaphysics or first philosophy captivated the best and brightest minds of the time.

Tonight, we celebrate a theologian — even as we know that designation, for so many, feels quaint at best. But thoughts about God continue to haunt our species; either we choose to dwell and deliberate upon them, or they thrust themselves upon us in moments of weakness by momentous life experiences: a death in the family, a devastating earthquake, a horrid hurricane, witnessing the birth of a child, a sublime starlit Saharan sky, or a sunset painted from the palette of a thousand shades of red and orange. Such experiences make us ponder about what cannot be seen. It must be so for a simple reason: we will always have to grapple with the why questions that our material sciences are unable to answer.

So it is fitting that we honor Dr. Plantinga for his singular contributions to addressing the whys, and for harnessing his extraordinary powers of intellect and directing them to the pursuit of theology’s handmaiden, philosophy — still, for some, in service of her queen. We are all the beneficiaries of his enduring work that has helped put theism back on the philosophical agenda. Without a resurgence of philosophy as the rubric that governs our great human pursuits, we deprive our species of a holistic understanding of knowledge.

“A great captain in the armies of God” 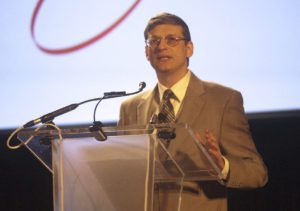 It’s scary to think about it, but to the extent that the universities are not healthy, to the extent that the universities begin to decay, we begin to see a picture of the future. We have been hearing, this evening, references to the middle of the twentieth century, to logical positivism, which played such a great role as an alter ego to the rise of Christian philosophy in the universities in America and beyond. What’s being said, maybe a little bit too gently for my taste, is what arrogance and folly it was for a generation or two of philosophy professors in the great institutions of the West, once Christian institutions, not only to say that God doesn’t exist, but that it’s meaningless nonsense to say that God exists. How arrogant, how foolish. Only a professor could come up with something so arrogant and so foolish, yet at the same time also completely false!

The generation of Alvin Plantinga, of which he’s the leader, the quarterback, the general — well, their philosophy hit the sleepy old atheism of the university philosophy departments like a tornado plowing through a haystack. It was not just the brilliance of his argumentation, but also his political savvy of befriending his foes, giving them respect and honor, finding a way to play ball with them and be elected to their institutions. It was also the savvy of the Society of Christian Philosophers, and the sheer gumption of a title such as Warranted Christian Belief.

All of this is the stuff of legend — but the important point is that while it looks easy in retrospect, it wasn’t easy. Alvin Plantinga is a great captain in the armies of God. And when I think of him, I think of this verse from Joel the prophet: “The Lord gave his voice in front of his camp, and therefore his camp is very great, for he is mighty that carries out God’s word.” This is what makes Alvin Plantinga’s life a unity, I believe, this is what makes him an example to all of us. And his example echoes throughout all the world. 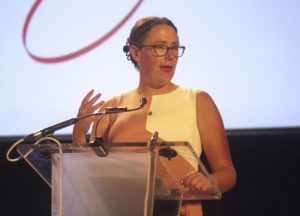 As an undergraduate philosophy major at UVa, Professor Plantinga, what I admired most was the rigor of your arguments. . . . In graduate school, and struggling to find my own writing voice, I came to deeply admire the style, authenticity and humor with which you executed those arguments. Returning to your work after weeks in the logic mines always reminded me that even the most abstract topics can be personal and that writing can and should be a joy.

As a newly minted Ph.D., I worried about the ways in which my Catholic faith might be a liability in an extremely tight and secular academic job market. What I most admired then was your courage. In many academic circles throughout your career, belief in God was treated more as a historical feature of philosophy, not as what William James would call a “live question.” But from the beginning, you’ve let your faith be visible in your philosophical research. That took tremendous courage over the decades, and your example helped many other men and women of faith see they had futures in philosophy. I see many of these philosophers in the audience tonight.

So over the years your example has made me (and others!) more careful, more eloquent, and more intellectually honest. At this phase in my journey as a philosopher, another of your accomplishment speaks even more loudly. What I most admire now is the sense of wonder that pervades your work. Wonder has a quality of optimism: there might be answers out there that we might discover, even with our limited abilities. It suggests a high value on that answer, whatever it might be. And most of all, wonder entails a surprise and love of the question itself — of its ability to be even be pondered — and of the excitement of entertaining answers.

How amazing to think — like King David when he wrote the words “What is mankind that you are mindful of them?” — that we might have minds capable of entertaining such truths. In your work, you give us a life-giving example of how our minds can rigorously and fruitfully seek such knowledge.