On this day, we honor Bill Bright, who started the Campus Crusade for Christ movement. 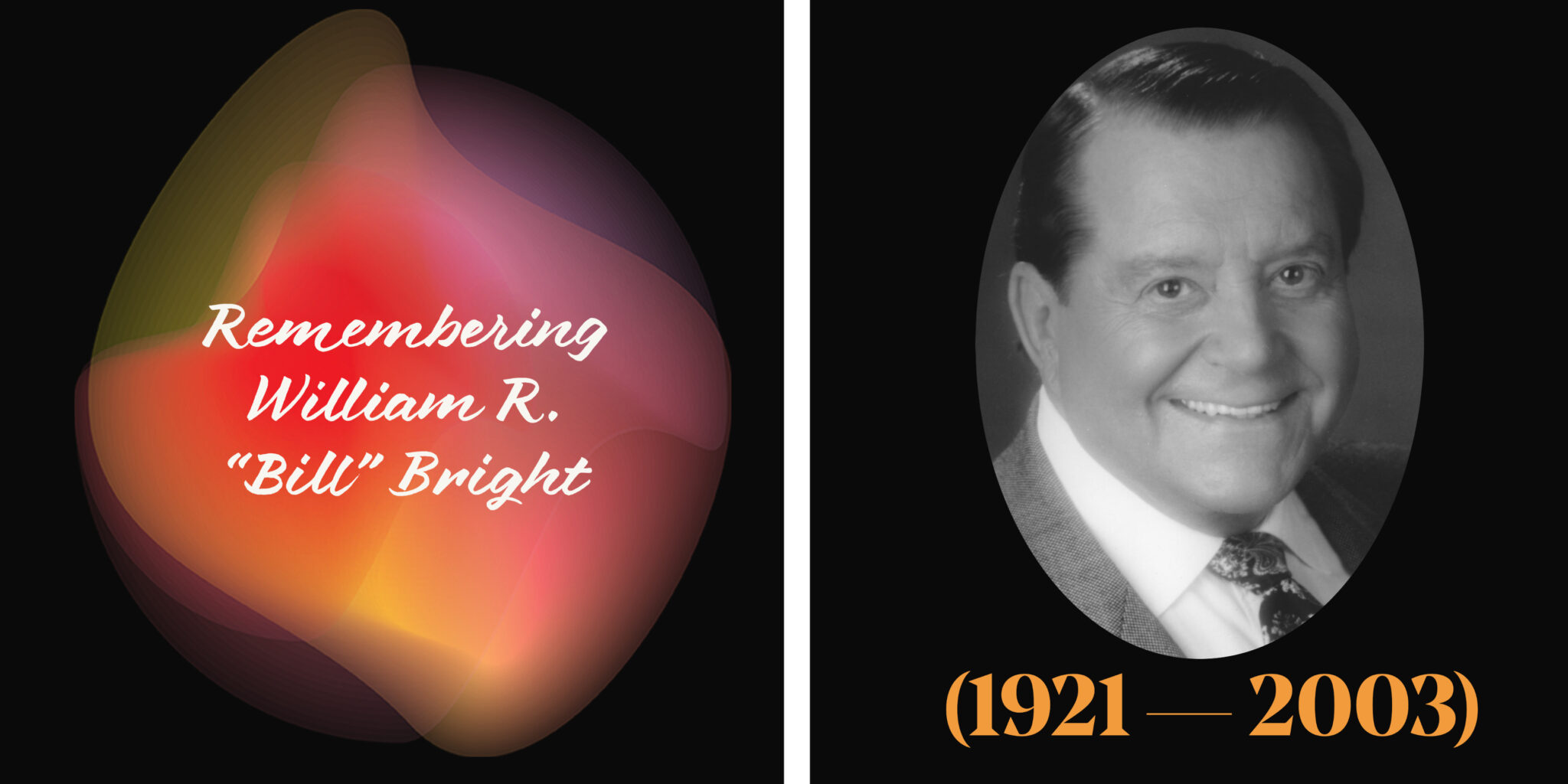 Bright was the former president and founder of Campus Crusade for Christ International and one of the most vigorous Christian evangelists in the world. A former specialty-foods purveyor, he sold his business to begin Campus Crusade for Christ with his wife, Vonette, at the University of California at Los Angeles in 1951. The Campus Crusade has reached more than two billion people with the Biblical message of God’s love and forgiveness.

Born near Coweta, Oklahoma in 1921, Bright attended a one-room schoolhouse until eighth grade.  In school, he distinguished himself as an achiever in academics, student government, journalism, drama, debate, and oratory, all disciplines that would later serve him well in his mission.  After graduating with honors from Oklahoma’s Northeastern State University in 1943, where he served as president of the student body and editor of the university yearbook, Bright moved to Southern California and began a confections company.

Today, we remember Bill and reflect on his remarks on Moses and having faith in God, delivered at the Templeton Prize award ceremony in 1996:

“Some may wonder if the money could not be better spent by giving it to the poor, or to direct evangelism. But the roots of poverty are spiritual, and the power for evangelism comes through fasting and prayer. In both cases, it is most important to seek God’s face and ask for His help and intervention. He can do more in one second that humans can do in a thousand years of their own effort.

An example is Moses, who led the children of Israel fleeing the Pharaoh’s army. They seemed trapped at the Red Sea. Their destruction seemed imminent. There was no human solution. But the people cried out to God. He was their only hope. God answered, and miraculously parted the sea, allowing their escape and victory over their enemies (Genesis 14).

Another biblical example is Jehoshaphat, King of Judah. Powerful neighboring nations came against him in battle with overwhelming force. Jehoshaphat was desperate. He knew that his nation would be lost without God’s help, and he proclaimed a fast throughout all of Judah. The Lord answered and said, ‘The battle is not yours but God’s … You will not need to fight! Take your places; stand quietly and see the incredible rescue operation God will prepare for you.’ Jehoshaphat and the people worshipped and praised the Lord, and as they did so, the Lord miraculously turned Judah’s enemies on one another, and they destroyed each other! (2 Chronicles 20, Living Bible).

What God did for Moses, Jehoshaphat, and multitudes of others through the centuries who earnestly sought His help, He will do for us.”

The Urgency of Harmony and Hope | Celebrating King Abdullah II