Washington, DC — Scientists unveiled the first-ever image captured of a black hole on April 10, a landmark achievement that was supported in part by a $7.2 million grant from the John Templeton Foundation. The image, which shows the light-ringed dark shadow of the black hole at the center of Messier 87 (M87), a massive galaxy in the Virgo star cluster, was captured using the Event Horizon Telescope (EHT), an array of seven observatories around the globe linked to create an earth-sized super-telescope. 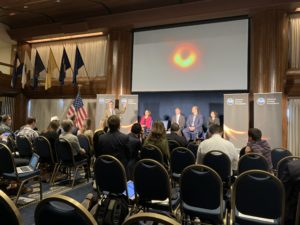 Until this morning, all images of black holes were illustrations based on simulations and artistic interpretations of astrophysicists’ predictions. EHT director Sheperd Doeleman, who also heads Harvard’s Black Hole Initiative, revealed the image of M87’s black hole to a gathered crowd of scientists and members of the press. The image he presented was a near-perfect match for what the simulations had predicted. It showed a ring of light bulging at one side, the result of superheated gas swirling around the black hole’s event horizon — the point at which its gravity is so strong that nothing, including light, can escape. “We now know that a black hole that weighs 6.5 billion times what our sun does exists at the center of M87,” Doeleman said. “This is the strongest evidence we have to date for the existence of black holes.”

Watch a short film on the black-hole image featuring Professor Avi Loeb of Harvard, one of the leaders of the Black Hole Initiative.

Explore other questions relating to the study of black holes at Harvard University’s Black Hole Initiative.

Watch Black Hole Hunters, a feature-length documentary about the observations behind the first black hole image. (Premiering Friday April 12 at 9pm ET/PT on the Smithsonian Channel).