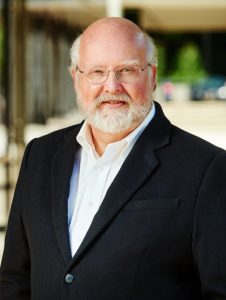 This conversation is the fifth in a series of conversations about the Strategic Priorities that the John Templeton Foundation will be funding over the next five years. This interview with Paul Wason, Vice President, Life Sciences & Genetics, was conducted and edited by Caitlyn Frazier, Communications Intern.

To get started, why don’t you share a little about your story. What brought you to the Foundation? What made you interested and excited about this place?

I studied anthropology and archaeology as a graduate student and had a specialty in cultural evolution. But the field was very different in the seventies when I studied. Culture was for humans only; anthropologists didn’t want to have anything to do with biologists. E.O. Wilson’s book, Sociobiology, came out just before I started grad school and to anthropologists it looked like an attempt to take over the field, reducing human society, culture, and our “higher” traits generally, to biology. So, there was unnecessary “bad blood.” But cultural evolution was revived in the mid-eighties on a different footing from what it used to mean, by using biological evolutionary theory to study culture – perhaps not so far from Wilson, in some ways, as it seemed.

I’ve always been interested in science and religion questions “on the side” and for a while published as much in that area as in archaeology. When the advertisement came out for a new Director of Science and Religion Programs at Templeton, I was drawn to it. I suspect one of the things they found interesting about me, in turn, was that I knew the private foundation world, admittedly from the other side of the desk as the expression goes, and in particular I understood how most universities went about seeking foundation grants. I like to say I’ve been here since the previous millennium, even though it was September 1999, so just barely, and it’s changed a lot since then.

How do you define this work?

“Culture” is one of those words that, if you ask any two experts you’ll get three definitions.  The standard view now is something like, culture is socially transmitted information that affects our behavior. Socially transmitted information is distinguished from both innate sources of behavior such as instinct, and from information you gather individually. I might go foraging and pick up a mushroom that makes me sick and learn not to touch that mushroom again. I probably could have learned it from some other person who discovered that long ago, so I could also have learned it culturally. In this case social learning is far more effective than individual learning, but other cases are not so clear since the standard view held by people around you may be wrong, or they might wish to deceive you.

The field of cultural evolution is essentially a study of how cultures change, using theory from evolutionary biology, taking advantage of what’s known in evolutionary biology and applying it to a study of culture. This raises a host of questions, such as, would such carefully developed concepts as fitness or natural selection mean the same things or work the same way when studying cultural change?

“Cultural evolution” as a term for studying how society and cultures change has a long history. In fact, Karl Marx and particularly Friedrich Engels developed models of how societies pass through stages from bands to tribes. But I think the revival of the modern version, with the connection to biology, can be traced to two books. One is Robert Boyd and Peter Richerson’s Culture and the Evolutionary Process in 1985, the other is Luigi Luca Cavalli-Sforza and Marcus Feldman’s Cultural Transmission and Evolution. These were both books approaching culture very mathematically, with some biological theory.

Since then, because those two books actually generally led to new insight about cultural dynamics, the approach began to catch on. Another factor is that over this time period, more and more people have come to accept that other animals, besides humans, have cultures. Many in the field today will say that research prior to the eighties wasn’t evolution in any sense, but rather was a kind of speculative history. There are people who will tell you it isn’t really a field yet—it’s still young, it’s still amorphous—but several years ago, we helped with a grant to start the Cultural Evolution Society. So, there is actually an academic society for it.

What are the goals for the cultural evolution priority?

The overarching goal is very broad – to understand what it is to be human. One way of getting at what’s distinctive about being human is to ask how we differ from other organisms. That’s a matter of cultural evolution. Many organisms have culture, including all of the great apes. What difference does it make, to the organisms themselves and to the world of life more broadly, that culture is so common? And what is different about human cultures? It is obvious human cultures differ – after all, we’re the ones studying the bonobos, not (so much) the other way around. But what is different?

Another theme concerns human thought and behavior. This is being studied intensely in a range of fields, but the emphasis is often on humans as individuals. The neurosciences are concerned with the brain and the mind and how they relate to each other, but a cultural perspective connects people together. Culture doesn’t just exist in one mind—or one place—it’s what Sir John Templeton would call a “non-material reality,” yet it affects the material world. And while it is important for each individual to cultivate the virtues, there is another angle: what virtues are encouraged or not encouraged by a cultural situation, and if we know more about how cultures evolve we might have a greater chance of changing that.

In several places John Templeton wrote that with the advent of culture, now there is an organism that can play a role in its own future. He was really interested in how we shape our futures. One element—not a separate area to fund but one element we’re interested in—is how we can use what we’ve learned about how cultures really change to change our cultures in ways that help us reach our possibilities, rather than move us away from them. Intentional culture change has often come with dramatic, unintended consequences. Can these be avoided? We are going to change ourselves for the future and what we’re going to change is mostly our culture. We’ll change our genes with CRISPR, but mostly we will change culture. How can we do that better? One way is to know who we are as humans—what we’re here for—so there are the theological elements. And another is to know the processes of how culture change works so we don’t really mess things up.

What is the most exciting thing to you about cultural evolution?

This sounds like a very abstract thing, but I am continually intrigued about how important culture is. We use the word all the time, but I still think we don’t fully appreciate the difference culture makes, how much of being human is cultural. I got into anthropology because I’ve always been intrigued by different cultures around the world and how they do things differently. It’s one of those things, the more you know, the weirder and more complicated it gets. It doesn’t lead to simple answers. Suppose I had grown up as a Native American on the northwest coast. I am sure I can’t really imagine what that would mean deeply, but I do suspect that when I got hungry I would have some salmon. As it is, I think I’m going to have a hamburger. Virtually everywhere you turn, culture is important and complicated. I just find it endlessly fascinating that there’s this phenomenon, culture, that affects us so much and that we can change.

What is the state of the cultural evolution work now and what are the most interesting and surprising developments?

The state of the field can be described as lively – it is growing and changing. The two last cultural evolution meetings I went to, a large portion of the attendees were likely grad students or post docs, which means the field is going to grow. People don’t choose a topic to study in graduate school unless they sense there’s some potential future for it, at least in terms of good questions to research for the rest of their lives.

Why do you think cultural evolution is important now?

There are a couple things. One, strategically, it’s a young field where the boundaries are not set as deeply in stone as in so many fields.

It’s also an opportunity to help people outside the field appreciate the value of cultural evolution. Both in the sense of culture as a phenomenon in the world and also the importance of culture as a concept for the analysis of living things. Right now, there’s considerable debate about each of these topics. As I mentioned, there’s this question of what part of our thinking is based on genetically evolved mechanisms of the brain and what part is cultural. People disagree on that but a case is being made for more of what it is to be human being cultural. Since we know Homo erectus had culture, we also know that we ourselves evolved in a context of culture. Our way of thinking was fostered by culture. But how that works is a big question at the moment.

What are the respective roles of biology and culture in making us human? Or what is the role of conceptual thought in culture change?

Where would you like to see the state of this work in five years and what questions do you hope we’ll be asking then?

It’s interesting that we spend a lot of time thinking about big topics and they’re usually not the sort of things that can be answered in five years. I think, structurally, what I’d like to see are people in the field who come from different disciplines working together more. So evolutionary psychologists working with cultural anthropologists and biologists so as to take advantage of each other’s understanding. I would like to see the debate about how human cultures differ from those of other animals take a new turn. When we better understand how our cultures, how our belief systems affect our biology, the environment around us, and each other, I think we’ll have insight into avoiding certain kinds of illnesses. We might also move beyond vaguely appreciating other cultures to taking them seriously as a source of insight into reality.