Humans have contemplated the possibility of life beyond Earth for millenia. In ancient Greece, the philosopher Epicurus pondered “an infinity of worlds” outside of our own. Roman poet Lucretius theorized that “there must be other earths inhabited by different tribes of men and breeds of beasts.”

As science and our knowledge of the universe advanced, extraterrestrial questions intensified. From the creation of SETI to recent headlines about UFOs, humans are pouring more attention and resources into the discovery of alien life than ever before. To understand this fascination, as well as the spiritual and philosophical implications of life beyond Earth, we spoke to Dr. Jennifer Wiseman. 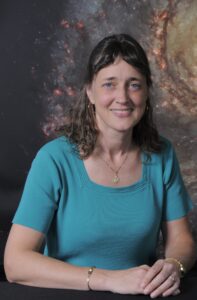 Dr. Wiseman is an astrophysicist who studies the process of star and planet formation. In addition to working with several international observatories, she is currently a senior astrophysicist at the Goddard Space Flight Center. Wiseman also directs the Dialogue on Science, Ethics, and Religion (DoSER) for the American Association for the Advancement of Science. Part of DoSER’s work involves facilitating conversations between scientists and diverse people of faith on the exploration of the cosmos.

As a person of faith herself, Wiseman has thought deeply about how the public reckons with scientific discoveries from a spiritual and philosophical perspective. “Faith communities are often very involved in human wellbeing around the planet and implementing some of the findings from science to hands-on service,” she explains.

John Templeton Foundation: Why do you think humans care so much about extraterrestrial life?

Dr. Wiseman: People are curious about the purpose of our lives and where we fit into the bigger picture. We wonder how we relate to the other animals on this planet, and then as we begin to understand more about the universe around us, we begin to expand our questions to wondering how we fit into a larger scheme of reality. Given that now we know the natural world in terms of the universe is enormous, it fertilizes deeper questions about where we fit into a universal cosmic picture.

What’s at stake for how humans understand ourselves biologically, with respect to alien life?

Biologically, we are very curious to know if life has popped up on other planets as it has on planet Earth. This is interesting in its own right. But it’s also interesting for understanding the significance of life on our own planet: Are we rare or are we common? Is life something to be expected to pop out of a universe that has the fundamental laws governing it, or is it something that would only come about in very unique circumstances? These types of interesting biological questions lead to deeper philosophical and spiritual questions.

What are some of the spiritual or philosophical questions you’ve encountered among the public?

For better or worse, humans have a dominant role on this planet. The decisions that we make about how we live affect the very existence and quality of life for other humans—and for all other species on this planet. We have moral responsibility. So then the question is: If there are life forms beyond planet Earth, would they also have advanced to the stage of having an awareness of the cause and effects of their actions around them? And would they have a sense of right and wrong? If life is common, does that mean that life that has the same types of moral challenges in common?

There’s something about the setting of alien environments that makes people want to not only imagine what life might be like, but also to try to translate the same moral dilemmas that we have on planet Earth to these alien settings—and imagine how they might be resolved.

Science doesn’t want to answer the same kinds of questions that a religious perspective would address and likewise, faith-based approaches don’t address the same kinds of questions that science is designed to address. But these different quests for different types of understanding are very complementary. For me, I have always found science to be a joyful and intriguing way of living out a perspective that’s rooted in faith.

What have scientific discoveries revealed so far about life beyond our planet?

We are in a wonderful new age of astronomy where we are beginning to detect thousands of planets beyond our own solar system. When I was beginning my graduate studies, we didn’t know of even one planet orbiting a star, other than the sun. We have now—through various, often indirect techniques—detected thousands of exoplanets. And we’re now taking the next step with many of these star systems and can analyze something about the characteristics of those planets: what are their atmospheres composed of, what are their temperatures like, would they be habitable for life as we know it.

We don’t have the capability yet of sending people or even probes to a planet outside of our solar system, and so what we are limited to is studying from a distance the atmospheres of exoplanets and seeing if there are signs of biological activity. We look for things like water vapor that might show signs of water. We look for signs of oxygen or methane that could be what we call “bio signatures”—byproducts of biological activity.

How likely is it that we will find evidence of alien life?

We have not yet found any life beyond Earth. But the scientific tools make it promising that, within the next few years or decades, we may be able to say whether or not life is likely beyond Earth. So that’s exciting.

We could be recognizing this scientific possibility, or even probability, of simple life within the next few decades. This is no longer something that’s just imaginative and speculative. The potential for detecting signatures of simple life is something imminent within the lifetimes of people today.

To me, that will be a wonderful discovery that will both be very exciting for science, and hopefully also an inspiration of awe and wonder and praise for people of faith.

What role do humility and wonder play in this exploration of the cosmos?

Humility drives an open mind for scientific quests. But I think awe and wonder is the drive for what keeps humanity enthusiastic about this quest. The universe has no shortage of phenomena to fill us with awe and wonder.

These types of questions, and the science that fuels them, are based on very basic human curiosity. And I think it’s worthwhile curiosity, because beyond just survival, humans need a sense of purpose for their lives. It is basic exploration, like scientific exploration of the universe, that feeds that part of our human spirit. Things like the arts and humanities and music do the same thing. They both feed upon our human spirit and they likewise feed and build us up as we try to understand what it means to be humans who can contemplate our purpose and our place.