Inviting Jewish congregations to explore awe, curiosity and wonder through the lens of science 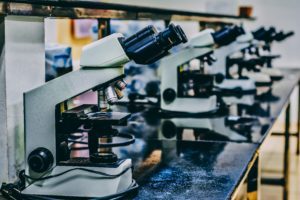 In May of 2017 an audience of more than a hundred gathered at Boston’s Congregation B’nai Shalom to hear Google executive Jeremy Wertheimer talk about the ways that artificial intelligence is transforming the human experience. As part of his talk, Wertheimer linked contemporary debates about who bears the blame if a self-driving car causes an injury, with a millenia-old Talmudic discussion of a surprisingly similar circumstance: if someone has an ox that gores a person or another animal, when should it be viewed as an accident and under what circumstances does the owner bear the blame? The Talmud’s advice: gather witnesses to determine whether the ox in question had a history of violence that would make the goring foreseeable.

The discussion was sponsored by Scientists in Synagogues, a series of events sponsored by Sinai and Synapses, an organization dedicated to helping Jewish clergy, scientists, and laity explore the ways that science and Jewish thought can mutually inform one another. The first round of ten Scientists in Synagogues grants were awarded in 2016, and applications for a second round of 12 grants — to be awarded to fund events like the Boston lecture — are being accepted until March 15, 2018.

Rabbi Geoff Mitelman, the director of Sinai and Synapses, likes to joke that the problem he’s trying to address is the opposite of that faced by efforts to convince certain Christian audiences to take interest in and embrace scientific findings: “In the Jewish world the challenge is not getting Jews excited about science, it’s about getting Jews excited about Judaism,” he says. “One thing that we aim to do is deploy the passion that Jews tend to have about all things scientific as a way to explore big questions where science and Judaism should be in conversation with each other.”

For Scientists in Synagogues grantees, these kinds of conversations can include issues ranging from technology and ethics, like the one in Boston, to explorations of the findings and implications of particle physics, and presentations where scientists from a local congregation speak with Hebrew school students about what practicing scientists do.

In addition to supporting congregations to carry out these activities, the program supports critical dialogue — including a one-day workshop in New York City, organized by Sinai and Synapses in a partnership between Jewish scholars, religious leaders, and the American Association for the Advancement of Science’s Dialogue on Science, Ethics and Religion (AAAS/DoSER). The workshop is designed to help grantees with mutual interests learn from each other.

Mitelman notes that at the previous workshop, attendees “spent the afternoon saying, ‘Here’s what we’re thinking about, we found this, we’ve tried this.’ Some synagogues already had working programs, others said, ‘we’ve got a great idea and we want to see if we can make it work.’”

Mitelman reports that while programs like Scientists in Synagogues are focused on helping audiences explore the harmonies and tensions of faith and science, they can have the desirable side effect of helping scientists themselves feel more integrated into their congregations.

“We’ve often found in the Jewish world that people who are incredibly brilliant and high-powered in their professions can walk into the synagogue and feel uncomfortable because they may not fully understand the Hebrew or know the liturgy,” Mitelman says.

By inviting such people to participate in Scientists in Synagogues, Mitelman says congregations are effectively saying “We want to capitalize on your expertise, to put you in a situation where you can show off and succeed.”

Mitelman hopes that scientists’ contributions to congregational life will also help counter the narrative that science competency and literacy are in tension with devout religious conviction. “The perception has been that there’s a scientific liberal, educated side, and there’s a religious, uneducated, conservative side,” he says. “And there’s a belief that if you fall on one side side, you’ve got accept every tenet from that camp and demonize the other side.”

Mitelman is hopeful that programs like Scientists in Synagogues can open up a third way for people to experience the richness of faith on the foundation of a scientifically grounded worldview: “Being able to say, ‘I want to be able to find the level of awe, the level of curiosity, the level of wonder that science can inspire’ — can that change the way that we think about our religious tradition?”

Find out more about the Scientists in Synagogues grant application, due March 15.