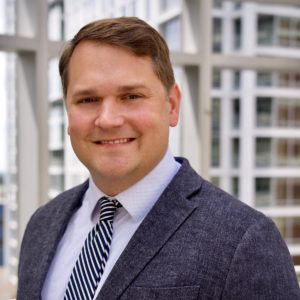 Matt Warner is president of Atlas Network, a Washington, D.C.-based nonprofit organization connecting a global network of more than 500 free-market organizations in over 90 countries to the ideas and resources needed to promote individual freedom and to identify and remove barriers to human flourishing.

Warner is the project leader for the John Templeton Foundation-funded grant Doing Development Differently, which works with think tanks in dozens of countries to identify and support “locally grown solutions to poverty.” This interview was conducted and edited by Nate Barksdale, lead writer for the John Templeton Foundation’s “Possibilities” newsletter.

How did you first get interested in entrepreneurship and development?

I took a break from college and spent two years with immigrant communities in Brooklyn and Queens, where I taught English and helped with housing and employment challenges.  I learned quite a bit from that experience, and it made a big impression on me. When I finished college, I started interning with a think tank that focused on economics and the impact that could have on individuals, which introduced me to other think tanks here in D.C. Almost everyone who works at think tanks finds the term think tank inadequate. What these organizations really do is pursue important and useful ideas that make the world a better place. If you consider that to be what a think tank does, then you can imagine a more expansive landscape of activity. Today we’re seeing think tanks engage more broadly in things like storytelling and filmmaking in addition to the traditional forms of books and academic papers.

I’ve been at the Atlas Network for nearly ten years. As an organization, it has always been committed to supporting the role of think tanks in working to achieve positive social change as an alternative to a more narrow focus on politics. This is more about ideas without having a partisan approach, combining the best of what academics can offer applied to the practical issues of the day.

Part of what we try to do is support think tanks that are tackling local questions around economic opportunity as a way to accelerate the decline of poverty worldwide. The broader economic development community has been struggling the last ten or fifteen years to figure out how to effect change without interfering too much from the outside. Local think tanks have emerged as super-important players. With local knowledge, they know how to achieve what we call “sticky change,” change that’s going to last. It has to be driven locally — it’s very context sensitive. Partnering with a local think tank is a great way to solve that challenge, to avoid actually making things worse in a place where you’re trying to have a positive impact.

You’ve written a lot about the “Outsider’s Dilemma” in economic development. What is it?

Economic development is a diverse, iterative, multiplayer process that nobody is in charge of, and that’s part of what Friedrich Hayek called the “marvel” of how it all somehow produces a valuable result — not perfect, but optimal based on the circumstances. The challenge of economic development for a philanthropist or an aid expert becomes, “How do I account for the fact that my involvement creates a potential distorting effect?” The “Outsider’s Dilemma” is simply acknowledging the need to have some humility around trying to solve other people’s problems and to look to support locally driven change to strengthen institutions.

Lately I’ve become interested in learning from some of the discussions in the progressive community around consent in aid and economic development. What does it mean to have consent when coming into someone else’s community and influencing the way people live and what goods are available? So that introduces important questions for outsiders. Not only that, so much of economic development and aid involves “cost of doing business” corruption. When you need to have local government actors responsive to your demands and needs as an outside funder, that has troubling implications for budding democracies because it shifts the government’s incentives and accountability away from local citizens. I’ve been encouraged to see the spread of the hashtag #ShiftThePower, which calls on NGOs in wealthy countries to take a back seat and to help build up local NGOs in developing countries. It challenges us to rethink our role. Many organizations have token relationships with local partners to signal local credibility but they still retain control over decisions. For them, it’s still about our ideas and our agenda and our priorities. But here’s a movement saying, “How can we support local organizations with their own vision for change, without us trying to be puppet masters behind the scenes?”

Not only is the former approach icky, it’s also at odds with what’s actually going to work. It’s a fundamental denial of human dignity to go in and orchestrate a new society for someone — it’s folly.

At Atlas Network, we don’t think our grantmaking is successful if local organizations are playing to donor needs in terms of priorities and strategies. That’s just crowding out what they would determine is important locally. We still do peer exchange and idea-sharing, but we treat NGO and think tank leaders like entrepreneurs in that it’s their prerogative to determine what’s going to work for them.

How did the ideas of economic freedom and economic development combine for you?

I was always interested in economics and I associated liberal economics with enlightenment and individual dignity and freedom. So I always thought of those things hand in hand, but my experience working with low income populations really galvanized for me an understanding of human dignity. People who have low incomes don’t lack intuition or dreams or ideas about what’s important to them — they have all of those things, and those are the things that matter for economic decision making.

I think the overwhelming majority of people are not only capable of designing their own path to prosperity, but their understanding of their own trade-offs and values represents the optimal pattern that should be pursued to achieve that. Often an outsider approach has us making incredibly simple assumptions about human behavior and what rationality means. It’s a lot of presumption to think that we can build a simple model and then determine what people ought to do — in my experience, what people ought to do is something that they need to define for themselves. I like what Lant Pritchett, a development economist at Harvard says, “There are no poor people. There are people living in poor places.” It’s his way of showing that the problem is the rules of the game where they live — both formal law and informal norms. When those people move to places that are more hospitable to individual paths to prosperity, they can thrive.

What are some big questions that currently inspire your work?

What is the nature of achieving positive change in the world and what can our role be in that? For us specifically, our theory of change involves local independent organizations leading discussions around the role of government, the ideas of individual liberty, and what optimal institutions are worth building to honor those ideas. In the current project we’re working on, the questions are: How much opportunity is there to build new and diverse coalitions that are sensitive to the outsider’s dilemma and looking for how to harness local vision for change? Can we build on those relationships to provide some of the answers to questions about the changing future of aid and economic development?

One of the most common challenges that we’ve learned from supporting think tanks is that in many countries, there is a very large informal sector that is doing economic activity that is not part of the legal, formal business sector. There are a whole host of reasons for what you might call a shadow economy. If you’re an entrepreneur operating within a shadow economy, you don’t have the protection of legal institutions over property rights, dispute resolution, protection from interference from the state, and so forth.

For example, until recently in Burundi, the cost to register as a business and join the formal sector was too high, both in terms of the actual fees required but also the time required. Low-income people can’t afford to spend time going to different offices following an ambiguous process. So there were these hurdles, and gatekeepers in a position to extract bribes, resulting in a very large informal sector. Businesses in the informal sector are unlikely to grow because they don’t have those kinds of protections — you can’t take big risks if a policeman can just take all your stuff away. So in Burundi, a local think tank there worked on these problems by pointing out to the public and to political stakeholders that the future economic success of the nation depended on making it more accessible for modest businesses.

Their advocacy based on their local knowledge was able to do a lot of things to make it easier to do business, both in terms of lowering the fees and simplifying the process to register. The year prior to those changes, there was only a 5 percent increase in new business licenses, but the year after they went into effect, there was a 49 percent increase. So you can see how people’s lives can change simply because a local think tank took a common-sense look at why their informal sector was so large.

What ideas have been most inspiring or influential to you recently?

The book that I have purchased and sent to others the most in the last year is Eric Beinhocker’s The Origin of Wealth. I started to get interested in complexity science, in which the Santa Fe Institute is a big pioneer, and came across Beinhocker through an online course they offered. Complexity science says that some phenomena are the result of multivariate, interdependent actors that you can’t put into a utility function and predict. These are problems where the initial conditions are so important because the system is so sensitive and complicated that any error in gathering data to know the initial conditions will highly influence the outcome of any of our models. In real life, the more complex a problem is, the more difficult it is to get quality data. For someone like me who wanted to learn more about complex phenomena like economic development, Beinhocker walks you through the relationship between the things that we understand about evolution and nature and the real insights it can give us for the way a large society is going to function. He says that wealth is a decentralized, evolutionary process, and so it’s really anathema to central design. I think it’s a very persuasive, informative, and comprehensive walk through understanding why that is, independent from what others might look at as a specific school of thought. I think it’s a truly transformative book.

Learn more about Matt Warner and the Atlas Network