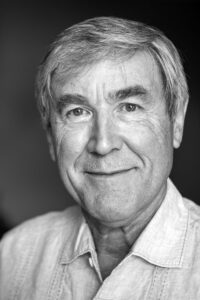 Paul Davies, a theoretical physicist, cosmologist, and best-selling author is Regents’ Professor of Physics and director of the Beyond Center for Fundamental Concepts in Science at Arizona State University. His research has explored quantum gravity, black holes, early-universe cosmology, and astrobiology as it relates to the origin of life. In 1995 he became the third physicist to be awarded the Templeton Prize, both for his groundbreaking research and his work engaging philosophers, religious leaders and the public around questions of the universe’s origin and nature. Nate Barksdale, lead writer for the John Templeton Foundation’s “Possibilities” newsletter, recently spoke with Davies about his latest book, What’s Eating the Universe?: And Other Cosmic Questions.

What I tried to do in this book is to pick a few perennial big questions that people ask, like ‘What happened before the Big Bang?’, ‘Are we alone in the universe?’, ‘Is time travel possible?’, and ‘How will the universe end?’ Interspersed with those, I wanted to find curious and quirky ways of teaching the background science that you need in order to understand these questions. And so some of the questions — ‘Why is it dark at night?’, ‘What is the speed of space?’ — are really there to sort of set out the conceptual framework that you need to lead you to the other big unanswered questions.

You start off the book by talking about the amazing map of the background radiation left by the big bang that was created by the COBE project in 1990, saying that it ushered in a ‘golden age’ of cosmology. Why was it so important?

When I was a student in the late 1960s, cosmology was really a scientific backwater. But this all changed with the use of satellites to map the cosmic background heat radiation, building up a quantitative picture of how the universe began, what it’s made of, how it’s evolving, and how it’s likely to end. Cosmology is now a precision science. You might think that this book would be a celebration of triumph, of a subject that is now brought under control, but every golden age brings with it a new crop of mysteries. What I’m doing in this book is setting out all of the big questions, the big things we still don’t know about the universe.

Is it difficult finding ways to distill these findings and questions at a length and level of technicality to reach a broad audience today? I noticed that the only equations that appear in the book, other than E=mc2, were in photos of Paul Dirac’s and Stephen Hawking’s plaques in Westminster Abbey.

Well, you know, if it’s on a headstone you can’t ignore it! It’s a bugbear of anybody trying to popularize physics that so many of the concepts require a mathematical treatment. I look for analogies and try to find ways of conveying the essence, but there’s nothing like an actual equation.

The whole idea of the book was to write something brief and accessible, to give the reader a flavor of how physicists think about the world and the type of problems they’ve come up against. Many of the topics really deserve a longer treatment, but it’s like how people responded to Hawking’s A Brief History of Time: some people thought, ‘That’s great, I don’t have time to get into all this sort of clever stuff.’ And then people have said, I didn’t understand a word of that — it was too brief!

Tombstones aside, you cover quite a bit of history bringing readers up to speed with the latest discoveries and questions physicists are grappling with.

I think it might be a function of my age — you get to the end of your career, you look back, and you spend a lot of time thinking about formative events. If you go back in history and discover that people struggled with the same basic idea 100 years ago, then I find it pretty fascinating. And I love to read that sort of account myself. I’ve just been reading a wonderful new book that’s packed full of history — the history of ideas and the history of science: Johnjoe McFadden’s Life Is Simple: How Occam’s Razor Set Science Free and Shapes the Universe.

Have the kinds of questions readers are interested in changed over that time?

Back in 1980, I was asked to write another popular book. And I said, ‘Look, there have been lots of books on cosmology and general relativity. But quantum physics has been rather overlooked, and it’s a wonderland!’ At the time there was a lot of skepticism from the publisher, but that’s all changed over the intervening years. I think people have become aware of things like quantum computing. They know quantum physics is weird, but they also know it has practical applications. Consider that quantum mechanics was worked out in the 1920s, yet it’s only now that people are perceiving that there’s something important to it. A lot of people still haven’t really caught up with 19th century physics, with things like electromagnetism and thermodynamics.

Near the end of the book you talk about the nature of the scientific method in physics, how it’s a tool not just for explaining the physical world but for understanding it.

Physicists have a term called curve-fitting: You take the data, you draw a curve through it, you can fit it to some mathematical formula. And you’re just describing what you see, it’s just a compact way of cataloging the information. There’s no attempt to look for a deeper principle from which those results would flow. The classic example is how Kepler worked out the orbits of planets from careful observations, and said they were elliptical, but had no idea why. But when Newton came up with his famous laws of gravitation and motion, he was able to derive the elliptical shapes, giving an understanding of what’s going on, connecting things rather than just describing them.

I can imagine a planet with highly intelligent beings, who never discover this thing we call science, maybe never develop mathematics. When they look at the world, they can see that some things have regularities and patterns, and then there’s some complicated chaos, and they might catalog all that, but they wouldn’t understand what’s going on. That was the situation with our ancestors. What intrigues me is that people 10,000 years ago had the same brains as we do. And yet, we took all that time before we stumbled on this thing called the scientific method. It’s a power that it lets us find out about things that could never have been discovered in any other way. I give a few examples in the book: anti-matter, neutrinos, gravitational waves, the Higgs Boson — nobody would ever know that these things are out there from daily observation. We can’t tell from just looking at the world. But because we understand what’s going on—not a complete understanding, of course—we can do more than just describe, we can get to the deep principles that interconnect all the disparate phenomena.

The ability of humans to decode the world like that is an astonishing thing. Where did that come from? Is it just a lucky accident that our brains evolved to survive in the proverbial jungle and yet, the same type of cognitive abilities enable us to know about quantum physics or what’s going on inside a black hole? We have a universe that not only brings forth life, not only brings forth intelligence and observers, but also brings forth comprehension.

Read What’s Eating the Universe?, or Paul Davies’ many other books, including The Demon in the Machine: How Hidden Webs of Information Are Solving the Mystery of Life (2019) and The Goldilocks Enigma: Why Is the Universe Just Right for Life? (2009) and read his Templeton Prize Acceptance Address.