The burgeoning era of astrophysical experiments takes physicist Giovanni Amelino-Camelia back to his childhood, waiting to switch on the new TV set and see all the colors of the rainbow. Read the full article here.

An alternative framework of physics, in which light’s speed can vary

When Giovanni Amelino-Camelia was seven years old, his parents replaced their black and white television with a new set displaying a kaleidoscope of colors. “I’m old enough to remember my excitement as a whole new world opened up,” he says. Now a physicist at the University of Naples, in Italy, Amelino-Camelia likens this to his anticipation today as new astrophysical experiments are scheduled to go online, with the potential to shed light on the mystery of our cosmological origins. Aptly enough, he hopes that these instruments will help confirm or rule out an alternative framework of physics that he has been working on with colleagues, in which light of different colors moved at different speeds in the early universe: so-called “rainbow gravity” models.

Rainbow gravity models were first proposed in 2004 by physicists João Magueijo of Imperial College London, UK, and Lee Smolin of the Perimeter Institute (PI) in Waterloo, Ontario, as a rival to the mainstream story of our cosmic beginnings.1 The textbook Big Bang model says that around 13.8 billion years ago, our universe sprang forth from an infinitely dense point, or singularity, when time itself began. A fraction of a second later, it went through a burst of rapid inflation. In standard physics the speed of light is a constant, which provides a limit on how fast anything, including information, can travel within the universe. Inflation, however, exploded space itself outwards at a faster-than-light pace.

Magueijo argues that rainbow models could do away with the need for this hypothesized inflationary phase, in a simple way. It also ties neatly with new attempts by Amelino-Camelia and others to derive a long-sought theory of “quantum gravity,” potentially unifying physics. Perhaps most controversially, some physicists have calculated that rainbow models could remove the need for a Big Bang singularity entirely, implying that our universe existed eternally into the past.2 The quest is now on to find evidence for or against rainbow frameworks.

To explain why inflation was proposed — and why it is so popular — cosmologists point to the heavens. In the 1960s, astronomers detected a faint hiss of microwaves in every direction they trained their telescope. Now dubbed the “cosmic microwave background,” this 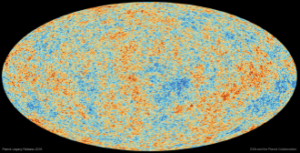 The Cosmic Microwave Background. Maps of the CMB reveal slight temperature
variations in the relic radiation of the Big Bang, in exquisite detail. (Image credit: ESA and
the Planck Collaboration.)

radiation is a relic of the Big Bang explosion. It is almost exactly the same temperature even if you look at opposite ends of the sky, a fact that initially gave cosmologists a headache. This is because they had calculated that when you wind the clock back 13.8 billion years those far flung regions would not have been close enough together to have had time to interact and reach an almost identical temperature before being separated.

Inflation provides a compelling solution. In the 1980s, cosmologist Alan Guth, now at MIT, argued that if the cosmos had a brief but rapid growth spurt soon after birth, then two neighbouring patches in the early universe that had reached the same temperature could indeed have been hurled by inflation to opposite ends of today’s sky.3 Inflationary models also predict that there should be subtle deviations in the temperature of the cosmic microwave background, variations that have since been confirmed by measurements. So, given the success of inflation, why do we need alternatives?

“It’s not just an allergic reaction to the mainstream,” says Magueijo. One reason is that inflation, as a scientific paradigm, seems impossible to disprove, because there are many different versions of inflation on the menu. Some do not fit with measurements and are discarded, but there are always tweaked versions that can be made to replace them that fit with new data coming in. “As a paradigm, inflation can explain anything,” says Niayesh Afshordi, a collaborator of Magueijo’s, also at PI. “That doesn’t mean it is wrong, but to me it seems more like a religion.”

To this end, Magueijo has been investigating whether alternative falsifiable models could explain the cosmic microwave background data just as well, or better than inflation. “People need to make sure inflation is mainstream for good reasons, not sociological ones,” he says.

In 1997, Magueijo and his colleague Andreas Albrecht, now at UC Davis in California, developed a simple rival model to inflation, harking back to an idea from the 1930s by British physicist Paul Dirac, who mused that nature’s physical constants might not be so constant after all. Magueijo and Albrecht realized that if the speed of light was boosted in the very early universe, light could zip around fast enough to bring distant patches to the same temperature. This would explain why the furthest reaches of today’s observable universe are at roughly the same temperature, without invoking inflation.4

Magueijo and colleagues have since extended these concepts to create a “rainbow framework” encompassing models in which different colors of light — including both visible light and the wider electromagnetic spectrum — moved at different speeds in the early universe. They have also investigated models in which the speed of gravity and the speed of sound vary under extreme conditions too. In doing so, they were surprised to find that their work linked to those by others tackling a conundrum that has stumped mainstream cosmology for decades: how to create a theory of quantum gravity that unites physics on cosmic scales — Einstein’s theory of gravity, general relativity — with the laws governing the smallest scales, quantum theory. On these tiny scales, involving atoms and molecules, gravity is usually too weak to have a noticeable effect.

Einstein’s general relativity says that space and time are knitted together into a spacetime fabric that pervades the universe. Gravity manifests because massive objects, like stars, warp this fabric, and smaller objects —including particles of light, known as photons — follow the resulting contours in the fabric. According to general relativity, gravity’s influence also travels at light speed.

But while general relativity has been hugely successful at describing the motion of stars and planets, it breaks down when you try to describe small but highly dense regions — arenas where quantum rules apply, but where gravity is also strong because so much mass is concentrated into a small space. This has shrouded the universe’s birth in mystery. It’s thought that the cosmos was born from an infinitely dense point known as the Big Bang singularity, but without a working theory of quantum gravity, physicists cannot say what happens within a singularity.

Here Amelino-Camelia’s expertise comes into play. A friend of Magueijo’s, he had been working on models of quantum gravity for much of his career. Many quantum-gravity candidate models suggest that if you could zoom in and look at spacetime on the smallest quantum scales you would see that it is no longer smooth but made up of ‘atoms’ of spacetime. “I focus on how particles propagate through those ‘atoms,’” says Amelino-Camelia.5 He and his colleagues calculated that a granular spacetime would affect the rate at which light moves at the high energies seen in the early universe, resonating with Mageuijo’s findings. Suddenly rainbow cosmologies had connected to quantum gravity.6 “Things become more compelling when you come to the same place from two different directions,” says Amelino-Camelia. “Then you say, ‘Oh wow! What’s going on?’”

Taking things a step further, in 2013, physicist Ahmed Farag Ali, then at Zewail City of Science and Technology, Egypt, and colleagues calculated that some rainbow models bypass the Big Bang singularity. In standard general relativity, all colors of light should travel along the same paths round spacetime’s contours, at the same speed. But rainbow models suggest that light of different colors will travel different routes. If you try and trace these paths backwards to a point of origin some 13.8 billion years in the past, you do not arrive at an infinitely small singularity. Instead, says Ali, there is a “fixed point” representing a small, static universe.

The equations predict that it would take infinite time to reach this fixed point. “This is not the beginning of time, but a changeless state in which time does not exist,” says Ali. It thus renders the universe ageless.

Amelino-Camelia however cautions that while some rainbow gravity models may remove the need for a singularity, those derived from quantum-gravity candidates tend to leave the pesky singularity in place. “There is a wide zoo of possibilities,” he says. The question is, which do you choose?

Help with discriminating between rainbow gravity models — and potentially ruling them out entirely — could come within the next decade, as new astrophysical experiments gear up. Magueijo and Afshordi have calculated how the size of the subtle fluctuations in temperature of the microwave background should vary depending on the frequency of microwaves you look at, a relationship marked by a quantity called the “spectral index”.7 Astronomers already have a rough estimate for the spectral index, which fits their prediction. But the planned CMB Stage 4 experiment — due to deploy in 2027, with plans to place 21 telescopes in the South Pole and Chile — should provide data precise enough to rule out their prediction. “Maybe the model won’t pan out,” says Afshordi. “But I am excited that it can be tested.”

Amelino-Camelia meanwhile is looking at data from high-energy particles, called cosmic rays, and high-energy radiation, known as gamma rays, emanating from distant cosmic explosions. He and his colleagues calculated that in some quantum-gravity models, the speed of photons in gamma rays would be affected by the grainy nature of spacetime, leading to noticeable time delays in the arrival between high-energy photons and low-energy photons at Earth’s telescopes.

There have already been tantalizing “hints or clues of this effect,” says Amelino-Camelia, “but no proof.” In 2007, for instance, the MAGIC gamma-ray telescope collaboration based on La Palma in the Canary Islands announced that they had measured a 4-minute time 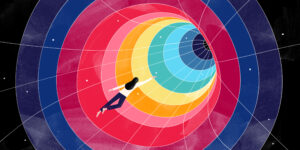 difference between the arrival of high and low-energy gamma rays released at the same time in a flare from the Markarian 501 galaxy, some half a billion light years away.8 The frustration is that astronomers cannot create another cosmic explosion to double check the numbers; they just have to hope another occurs, in view of their telescopes. “They are like fishermen, who can cast their rod, but then just have to sit and wait to catch the big fish,” says Amelino-Camelia.

But new networks of ground-based telescopes are on the way. These include the Cherenkov telescope array, with sites in Chile and Spain, which is scheduled to start taking data in 2022 and promises to improve sensitivity to gamma rays tenfold. There will also be bigger neutrino detectors and advances in gravitational wave experiments, in coming years. And Amelino-Camelia has put his name to “GrailQuest”— a recently proposed mission design that would send hundreds of nano satellites into low-Earth orbit to search for evidence of the ‘atoms’ of spacetime.9

It’s this burgeoning era of astrophysical experiments that takes Amelino-Camelia back to his childhood, waiting to switch on the new TV set and see all the colors of the rainbow, he says: “This is the next frontier of physics some of us are dreaming of.”

Read the project overview for Quantum Gravity Theories of Not Everything, led by Giovanni Amelino-Camelia

Read the project overview for What Banged?, led by João Magueijo

Read the project overview for The Irreversibility of Time, led by Lee Smolin