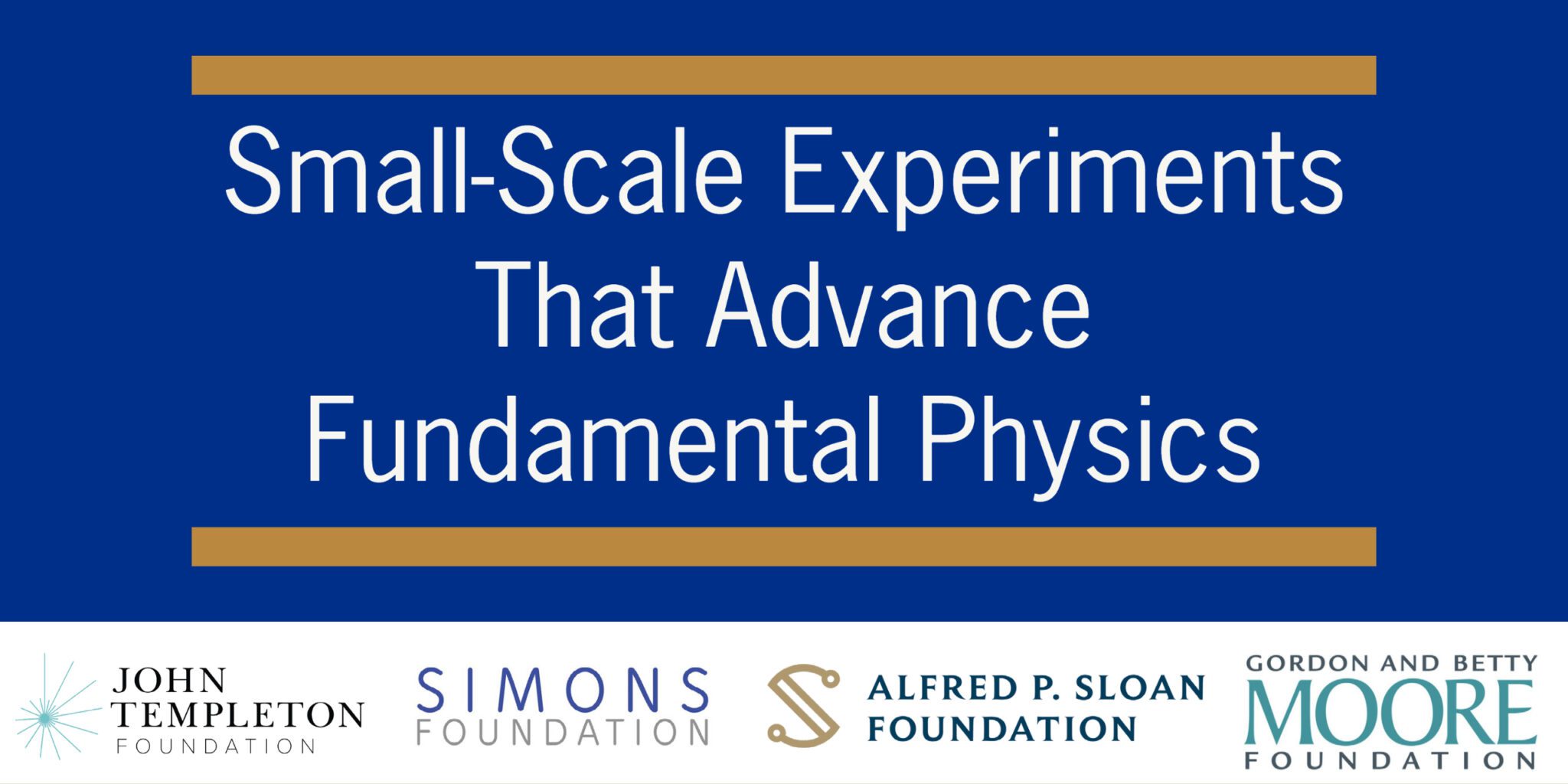 The John Templeton Foundation, the Alfred P. Sloan Foundation, the Gordon and Betty Moore Foundation, and the Simons Foundation invite applications to a one-time call aimed at advancing fundamental physics by funding small scale experiments that explore physics which has typically been explored at large-scale facilities (e.g., CERN, LIGO).

The program is intended to support high-risk and potentially high-return small-scale experimental projects aimed at new ambitious discoveries beyond the current frontier of fundamental physics.  “Small scale” refers to table-top size experiments or to ones that could fit in a typical university physics research lab.  Examples of such projects include, but are not limited to, tests of basic principles of quantum physics, tests of interaction laws and established symmetry principles, and searches for new particles.

Applicants must submit, via email to tabletop@simonsfoundation.org, a brief letter of intent (LOI) describing the proposed research. The deadline for submitting the LOI is October 31, 2022. The LOI should consist of a two-page summary of the proposed research program, a one-page estimate of the total requested budget that includes estimated line items for salaries, equipment, travel and lodging and other major expenses (each of which must be specified), and one-page CVs of all of the proposed PIs and co-Investigators (co-Is). Note that each proposal must select one person to serve as the contact PI, although several PIs or co-Is are permitted. All documents should be combined into a single PDF and have typeface and margins consistent with standard NSF-style proposals.

Applicants selected from the LOI stage will be invited to submit full proposals and may ultimately be invited to present their research to a panel of experts and foundation representatives in the spring of 2023.

Selected applicants will be directed to the appropriate funders’ regular intake systems and provided with instructions for submitting a full proposal to the funder(s).

By putting forward an LOI as described above, the applicant consents to all submitted information being shared among the four foundations, as well as with additional potential funders and external advisors for this program.

This program will provide funding for up to five years. The funding level and duration of each proposal should be appropriate to the proposed research goals. There is no recommended funding level for this program, but we expect typical annual project budgets to fall between $300,000 and $1,000,000. Further budget guidance will be provided to those invited to submit full proposals. The combined support provided by all foundations is expected to be up to $20,000,000 over the 5 years of this program.

LOI applications will be reviewed by foundation staff. Full proposals will be jointly reviewed by foundation representatives and external reviewers. Applications will be judged primarily on alignment between proposed activities and program goals, novelty and scientific merit, potential for success in advancing fundamental physics, capacity of the researchers, and project design.  Any full proposal submitted to an individual funder will be reviewed in accordance with that funder’s policies, guidelines, and processes, and the decision to approve or decline such a proposal will be made at that funder’s sole discretion.

Applications may be submitted by established U.S. and foreign public and private educational institutions and stand-alone research centers. PIs and co-Is must have a Ph.D. and a tenure-track or tenured position (or equivalent) at the time of application. There are no citizenship or department requirements for PIs.

Applications from scientists from underrepresented groups are especially encouraged.

Any questions about the application should be addressed to Liz Roy at tabletop@simonsfoundation.org.