How a Global Icon of Hope Found Her Way Through Loss

Jane Goodall speaks about facing grief in order to heal

Jane Goodall is an icon of hope across the globe. The naturalist and primatologist embodies a clear-eyed optimism for both humanity and the more-than-human world, an outlook many people feel especially hungry for in these days of uncertainty and ecological destruction. For Goodall, hope isn’t optional; she calls it a “human survival trait.” Living with hope helps us persist in the face of adversity. Without it, she believes, “we perish.”

Goodall explores these ideas in her latest book, aptly titled The Book of Hope: A Survival Guide for Trying Times. Co-written with bestselling author Douglas Abrams, The Book of Hope provides a roadmap for pursuing hope—not in spite of, but alongside loss. The losses she recounts are both universal and personal: grief over a damaged planet and grief over the death of a spouse. Through intimate storytelling, she offers a way forward through seasons of despair.

“[Hope] is a crucial survival trait that has sustained our species from the time of our Stone Age ancestors,” Goodall writes. “Certainly, my own improbable journey would have been impossible had I lacked hope.”

Finding Solace in the Forest

Goodall’s first major disappointment found her early in her career, while working as a researcher in Tanzania’s Gombe National Park. She had been sent to Gombe to study chimpanzee behavior, but months of grueling tracking and observation had brought her no closer to the chimps she needed to study. It was in Gombe that Goodall first understood the active nature of hope. She knew she could gain the chimps’ trust given enough time. She persisted in her research, 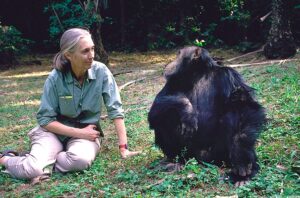 waking in the dark and following the animals until nightfall. This tenacity carried her through months of disappointment. During this time hope did not always come easily — and so Goodall learned how to maintain her grip on it. Eventually, her persistence paid off when she witnessed the chimps using tools, a trait previously thought to belong exclusively to humans. The discovery led to funding from National Geographic and propelled her career forward.

The early disappointments she experienced in Gombe were small setbacks compared to the loss she faced in mid-life. In 1975, Goodall married Tanzanian Parks Director Derek Bryceson. She describes her second husband as a “marvelous example of resilience, grit, and an indomitable spirit.” While flying for the Royal Air Force in WW2 Bryceson’s plane was shot down over Egypt. Though he survived, his legs remained partially paralyzed for the rest of his life. Still, he learned to walk again, on the strength of what one therapist called “sheer willpower.” But even for an indomitable spirit like Bryceson, there was a limit to what his body could endure.

After only five years of marriage to Goodall, an aggressive form of cancer took his life. “I will never forget his last words,” she says. “He said, ‘I didn’t know such pain was possible.’ I keep trying to forget what he said, but I can’t.”

Following her husband’s death, Goodall was plunged into a grief she’d never known before. As anyone who has lived through profound loss can attest, there are times when we lose sight of hope entirely. In mid-life, Goodall found that her north star had disappeared, extinguished by the night sky of grief. Suddenly, all she could see was darkness. She went home to England to recuperate in a familiar place. She found solace in the presence of animals, particularly her dog who slept on her bed and provided a reassuring presence. Then Goodall returned to Gombe. “It was the forest that helped most of all,” she remembers. “It gave me a sense of peace and timelessness, and reminded me of the cycle of life and death we all go through.”

In the forest, Jane couldn’t run from her grief. But she could face it without being overcome. In time, she could even move through it. “It’s really important for us to confront our grief and get over our feelings of helplessness and hopelessness,” she writes in The Book of Hope. “Our very survival depends on it.”  As she faced her grief and began to heal, she discovered that hope hadn’t left her for good — she’d just lost sight of it.

Decades later, Goodall still mourns her husband’s death. As she puts it, “…the depth of our grief is a reminder of the depth of our love.” But alongside the loss, she also carries a resilient optimism for the world and where we are headed, both as individuals and as a species. She draws strength from a particular mystical experience she had following Derek’s death, when he appeared to her one night in a dream-like vision. Following the visitation, she remembers, “I was left with the peaceful feeling that he was in a wonderful place.”

On the Other Side, Hope Waits

There is a misconception that hopeful people are naive, proverbial ostriches with their heads buried in the sand. But true hope requires a realistic acknowledgement of all that is painful in the world, and a willingness to face that pain head-on. Those who hope well have often suffered deeply. But rather than seeing despair as the end of the story, they view it as a chapter — a temporary season to walk through. Rather than allowing grief to have the last word, they confront it in order to move beyond it. On the other side, hope waits.

Jane Goodall, global icon of hope, teaches us that we can’t run away from the darkness that will inevitably find us. Nor should we lose ourselves in it. Only by facing our grief can we heal, allowing the fog to clear, the darkness to lift, and the stars to become visible once again.