New York, NY — Just hours after Templeton-backed researchers unveiled the first-ever picture of a black hole, renowned physicist Brian Greene appeared at a Foundation-sponsored event to discuss how black holes are revolutionizing our understanding of reality.

“Black holes provide a number of theoretical puzzles that we are still trying to resolve,” said Greene, professor of mathematics and physics at Columbia University and co-founder of the World Science Festival.

The TED Social event, “How Black Holes Change Our Picture of Reality,” was organized jointly by the John Templeton Foundation and Simons Foundation and brought together dozens of science-interested members from the TED network, including philanthropists, journalists, entrepreneurs, and practicing scientists. 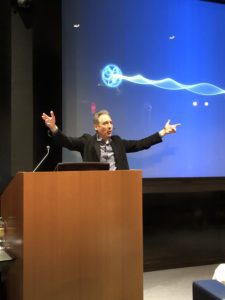 Greene, the keynote speaker, gave an hourlong lecture in which he presented a dazzling series of ideas derived from black hole physics, including wormholes, the holographic principle, and the implications of quantum entanglement for black holes.

Such fertile theoretical activity “shows how much opportunity there is going forward to rewrite our understanding of reality,” he said.

“It could be that someday we may have a full answer to, what is space? What is it made of? How does it hold together? And I suspect that those answers will rely on these insights that come from black hole physics.” 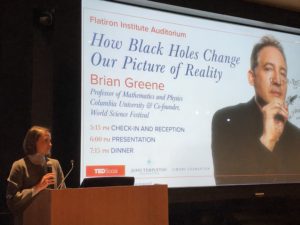 In her welcome address for Greene, John Templeton Foundation president Heather Templeton Dill said that the groundbreaking image of a black hole released April 10 reminds us of “the limitless potential of the sciences to help us better understand our world.”

Such breakthroughs, she added, fulfill the mission of the Foundation to support research that sheds light on unseen realities, including fundamental structures of the universe. Moreover, it builds on a legacy of significant work in the natural sciences funded by the Foundation, including projects such as: