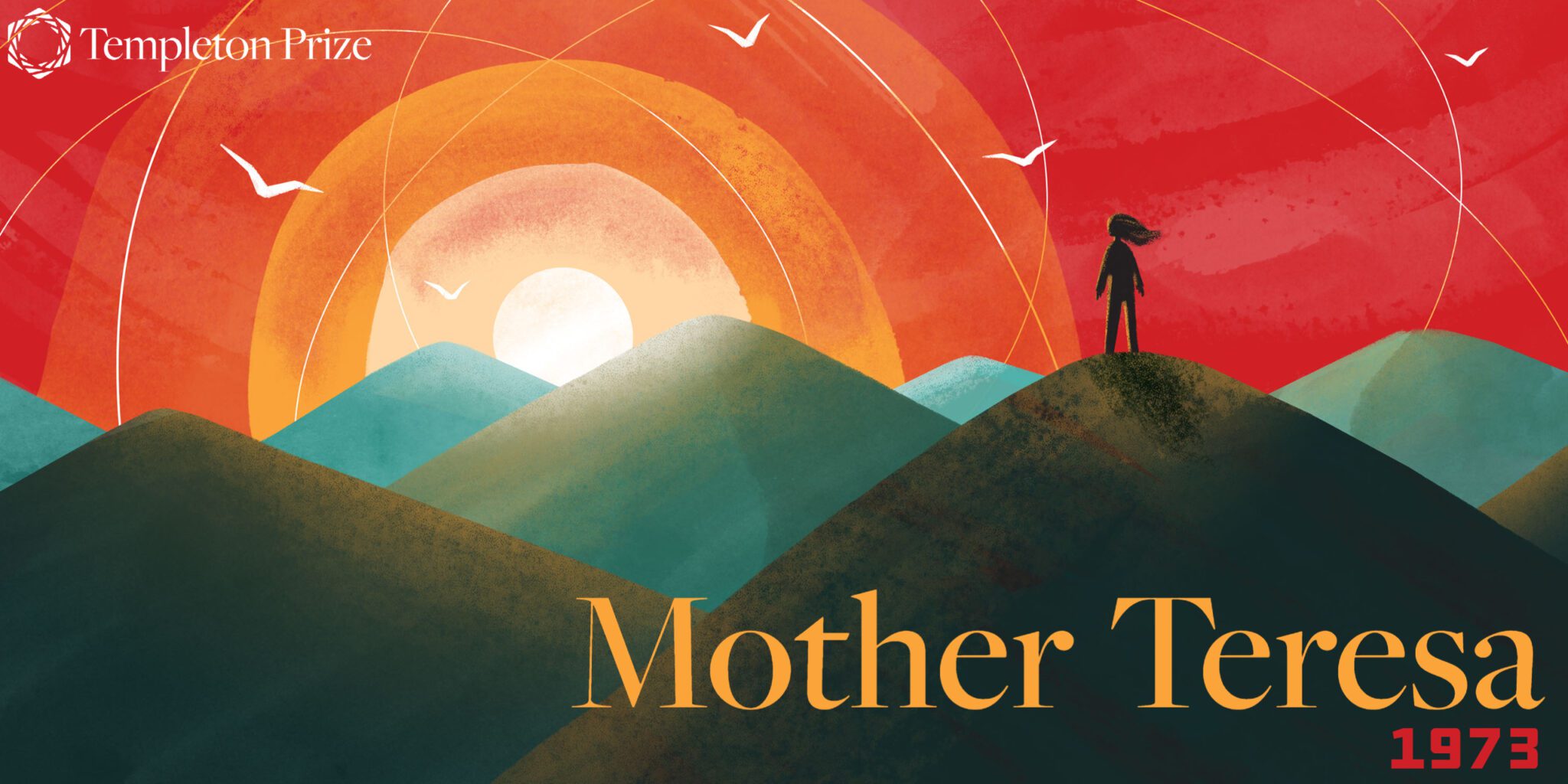 In 1973, the first Templeton Prize was given to Mother Teresa. In 2023, we celebrate the 50th anniversary of this award. Over the next 52 weeks, we will highlight each of the 52 laureates (including years with dual winners) and reflect on their impact on the world. From humanitarians and saints to philosophers, theoretical physicists, and one king, the Templeton Prize has honored extraordinary people. Together, they have pushed the boundaries of our understanding of the deepest questions of the universe and humankind’s place and purpose within it , making this (we humbly think) the world’s most interesting prize.

Mother Teresa, born 1910 in the Ottoman Empire (present-day Macedonia), was a Catholic nun and missionary who devoted her life to helping the poor and sick.

Born Agnes Gonxha Bojaxhiu to an Albanian family, she was given permission at age 18 to join a group of nuns in Ireland called the Sisters of Loreto. After her training, she traveled to India to begin her work. She was moved by the poverty and suffering she saw in Kolkata, which motivated her to begin working with the poorest communities in the area.

In 1950, Mother Teresa was granted permission to start her own group, The Missionaries of Charity, which provided love and care for those who could not afford any support. Her heroic work brought about real change among those she served and continues to inspire millions around the world. Mother Teresa was canonized as Saint Teresa of Kolkata by Pope Francis on September 4, 2016.

As the inaugural winner of the Templeton Prize, which at the time focused on what Sir John Templeton called “progress in religion”,

Mother Teresa was recognized for her extraordinary efforts to help the homeless and neglected children of Kolkata.

The first Templeton Prize ceremony was held at London’s Guildhall and presided over by HRH Prince Philip, Duke of Edinburgh. Prince Philip, Sir John Templeton and the Right Hon. Lord Mayor of London each delivered a speech about what the Prize stands for.

We look back on some of the remarks delivered at the inaugural Templeton Prize ceremony in 1973 by Sir John and Prince Philip.

“The Foundation inaugurated this programme in the historic church of Saint Bride in Fleet Street in May of last year in the hope that this programme will contribute toward increasing man’s love of God and man’s knowledge of God. Also, it is the hope of the Foundation that the Prize will release new and creative energies into society through better under-standing of the meaning of life and a greater emphasis on the kind of dedication that brings people more into concert with the Divine Will,”

“There is nothing I can say about Mother Teresa, but I think there is much to be learned from her example. I believe that the lesson which we should learn from this occasion is a very simple one and a very old one. It is just that the strength of a person’s faith is measured by his actions. St Paul puts it this way: ‘What use for a man to say he has faith when he does nothing to show it?’ Mother Teresa would not have lived this life and done this work, and could not have done it, without an overpowering faith. Indeed I do not believe there is any other way of measuring faith except through daily action and behaviour. No ceremonies, no protestations, no displays, no routines of prayer and no theorising can compare with the smallest act of genuine and practical compassion as a true reflection of personal faith.

I think there is a very natural tendency for many people to look upon God as the all-powerful creator and then to work downwards looking for his influence on events and for his continuing control of the world. I suspect that it might be better to begin with the evidence of the lives of people like Mother Teresa — that is if there is anyone quite like her — and to work from that evidence towards a better understanding of the power of God. Their work and achievements are really beyond what can reasonably be expected from members of the genus Homo in the strictly biological scientific sense.”