One Million Years Ago, How Did Humans Think?

Fossil digs and fMRIs offer new insights into the ways early humans lived and thought, more than a million years ago. 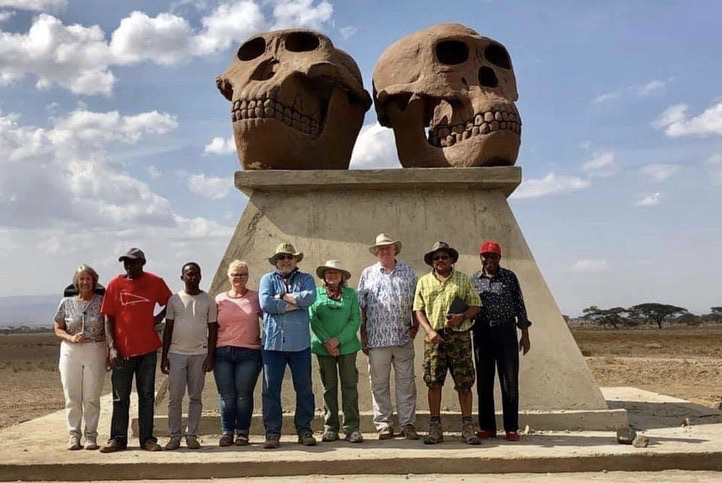 The first human inhabitants of the Olduvai Gorge left no lasting monuments apart from their stone tools and a few of their bones that survived to become fossils. Beginning around two million years ago, the 30-mile ravine in East African’s Great Rift Valley was home to successive waves of early humans: first Homo habilis, then Paranthropus boisei, and later Homo erectus. Since they were first explored by modern archaeologists in 1911, the gorge’s sediments have yielded dozens of key discoveries in the story of early humans’ physical and cognitive evolution. In 2019, the Olduvai finally got its monument, in the form of a pair of colossal 5,000-pound skulls — one of Paranthropus boisei and one of Homo habilis — sculpted by the Tanzanian artist Festo Kijo sitting atop a plinth along the tourist road between Serengeti National Park and the Ngorongoro Crater. The monument was one small facet of a three-year, $4.6 million project led by Nick Toth and Kathy Schick of the Stone Age Institute and Indiana University to support scientific research into how human cognition evolved, as well as public outreach to help people learn about who these early humans and pre-humans were, and what they have to teach us.

The brains of Homo sapiens are, compared to other primates, both large and costly, accounting for five percent of our body weight but using 25 percent of our energy. For our species, the energy outlay reaps dividends; our brains allow us to plan, cooperate, make, and use tools in ways that are unmatched by any other species. But how did this come to be? Toth and Schick believe that increased brain size wasn’t the fundamental cause of our cognitive evolution.  Rather, they believe that physical changes to early human brains were the result of prior behavioral changes and subsequent adaptations into the niche they had created. For the project, Toth and Schick leveraged their relationships with archaeologists working at three important early human sites to help flesh out the picture of early human cognitive evolution.

“We were kind of uniquely placed that we had good relations with China, Tanzania, and the Republic of Georgia, and they all had sites between two and one and a half million years ago,” Toth says. Tanzania’s Olduvai has traces of three early human species spanning more than a million years; the Homo erectus site in Dmanisi in Georgia is a relatively small outcrop at the confluence of two rivers that has proven incredibly rich in artifacts.  “Everywhere they put down a pit, they hit stone tools,” Toth says. “They’ve found five complete human skulls in an area the size of our living room. One is an adult that had lost all of its teeth in its lifetime. What did you eat, 1.8 million years ago, without teeth?” China’s Nihewan Basin has yielded stone tool remnants likely made by Homo erectus, although no fossilized human bones have been verified there yet.

At all three sites, the progression of tool artifacts and animal bones hint at the ways the early humans made tools and processed meat with increasing specialization. At Olduvai, many of the older animal bones have both tooth and cut marks, showing that the humans were competing with other large predators over the same meat. “By the time you get into the upper beds that we’re excavating — about a million years ago, there’s a lot more cut marks on those bones and there’s no carnivore tooth marks,” Toth says. “It’s like the humans were able to keep carnivores away from their kills somehow.”

Ancient tools and animal bones can tell us a lot, but many other aspects of early humans’ cognitive world, including society and language, have to be inferred. “Grammar doesn’t fossilize,” Toth notes. Nevertheless, studies of modern hominid brain anatomy can shed insight about when and why the capacity for language might have evolved. A portion of the grant supported studies by Indiana University paleo-neurologist Tom Schoenemann, who is looking at a part of the brain known as Broca’s area that is known to be important for human language. Using MRIs of human and other primate skulls, Schoenemann is working to determine which of the functions of Broca’s area can be inferred from the inside surface of the skulls — offering the chance to see when the potential for language became present in early humans. “We’re seeing a more developed Broca’s area in those proto-humans that we tend to put in our own genus Homo rather than the smaller-brained ones we put into Australopithecus or Paranthropus,” Toth says.

Schick notes that the difference doesn’t necessarily imply the presence of language at first. The project’s fMRI studies found that non-linguistic sequential processing overlaps with language grammar processing — suggesting proto-humans may have evolved with larger Broca’s regions because it conveyed advantages for food-finding. “This processing area pre-existed in the human lineage and we believe then became involved with language processing,” Schick says.

In some ways the story of human cognitive evolution that plays out at Olduvai and other sites — of increasingly specialized tools and techniques, and evidence of increasing social group size and far-flung sharing of expertise — provides a model for the growth of paleo-human studies. From the outset Toth and Schick’s project was planned not only to support direct research but also facilitate network-building among specialists, training of new scientists in the field, as well as outreach to the general public. “An important aspect of the grant was incorporating talented graduate students in the cognitive science program to look at human brain and cognitive evolution,” Schick says. “We’ve brought in critical speakers for them to transfer ideas about what other researchers in other parts of the country and world are doing.” Toth and Schick and their colleagues have also emphasized educational outreach work, especially in the countries that are host to key early human sites, providing training for local educators. “When they give us feedback, some of the teachers have said, ‘You teach one of us and we’ll teach thousands of students,’” Schick says.

The study of early humans challenges scientists to draw conclusions about early humans and their worlds based on the smallest of fragments — a fossilized tooth here, a stone flake there — much about early humans’ lives and worlds seems impossible to recover, a million-plus years later. Even so, there are many more fragments still to be discovered. One of Toth and Schick’s recent projects at Olduvai, which made significant progress under the grant, was geological drilling in the gorge’s ancient lakebed. “Lake sediments give you the best proxy for environment and time,” Toth says. “Currently the gorge is about 100 meters deep, so we thought we’d hit bedrock at around 150 meters at most.” Instead, the drilling has reached 200 meters and counting. “We have more than doubled the stratigraphic section at Olduvai, adding more than 400,000 years of time,” Toth says. “And we think we’re just a little over halfway to the bottom.”

Read Schick and Toth’s overviews of the cognitive implications of what we know about early humans in the Oldowan and the later Acheulian eras of tool manufacture.

Learn about findings from ongoing drilling work at the Olduvai Gorge.

Read Tom Tom Schoenemann’s chapter on language preadaptations in Broca’s area in How the Brain Got Language.